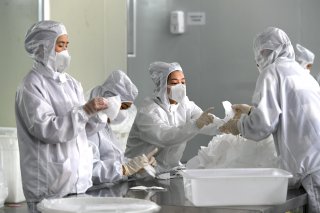 For the global commons, the coronavirus pandemic has served as one, giant slap in the face. The disease has exposed just how unprepared, under-resourced, and overworked the U.S. healthcare system is during a raging public health crisis. It has laid bare the political partisanship, parochialism, and sheer pettiness of America’s politicians, where lawmakers duck one another’s phone calls and snipe at each other in the media. The Trump administration’s months-long dithering, not to mention the sorry state of the Strategic National Stockpile, have also demonstrated to Americans how misplaced—and indeed backward—the country’s priorities have turned out to be.

The United States, however, is hardly the only country struggling to manage the fallout of this public health calamity. A laundry list of governments have been embarrassed over the past four months and made to feel totally incompetent. Notwithstanding the sensationalism about Beijing rising like a phoenix from the ashes and taking Washington’s place in the global hierarchy, China is at the very top of that list.

Economically, China has long put into a special category of its own—that of a prosperous and miraculous well-oiled machine. The statistics are there to back it up. Between 2000–2018, Beijing’s GDP increased by a factor of 10, from $1.211 trillion to nearly $14 trillion today. Life expectancy has risen by five years during that same time period. China’s growth single-handedly changed how the manufacturing and distribution sectors operate globally. 850 million Chinese have escaped poverty over the last four decades, a fact Vermont senator and two-time presidential candidate Bernie Sanders cited as an enormous accomplishment in its own right.

And then came the coronavirus. Much as the virus shuts down the U.S. economy, the infectious disease is doing the same to China. For the first time since 1976, Beijing reported an economic contraction, shrinking 6.8 percent over the first three months of 2020. The unemployment rate is increasing, which means at least a fraction of China’s success in alleviating poverty could be jeopardized. The virus is sending a message to the Chinese Communist Party that their system of open markets and closed politics is not foolproof; in fact, it’s just as vulnerable as the free market democracies of the West.

Economics is only a part of the picture. Only a few short weeks ago, commentators and foreign policy analysts were writing pieces about Washington’s decline and Beijing’s ascendance in global stature and credibility as if it were a foregone conclusion. American politicians were floundering in the present, it what said, while the efficient Chinese were already planning decades into the future. It may take a decade, two decades, or three decades, but the world will eventually wake up to a China-dominated world order or at least a return to bipolarity, with Washington and Beijing slugging it out for primacy in a twenty-first-century Cold War.

Yet the story is not that simple. Over the ensuing month, China has proven to be much different from the competent, highly-organized opportunist so many in the Beltway claim it to be. Indeed, if anything, the Chinese are squandering the opportunity in front of them by throwing their weight around aggressively. Beijing’s transactional approach to foreign aid, where governments on the receiving end of medical supplies, personal protective equipment, and ventilators are expected to publicly praise Chairman Xi Jinping for his generosity and humanity, is striking a nerve in Europe and damaging the image of a benevolent giant China’s propaganda machine has tried to promote.

China’s dominance of global supply chains in the medical and pharmaceutical industries are now at their most threatened in years. Much of the product China exports to coronavirus-inflicted countries has turned out to be garbage. In their effort to fix the problem, authorities in Beijing are slapping new export restrictions at customs for quality-control. Unfortunately, the additional regulations are creating a whole new set of problems by slowing down distribution at the same time governments are trying to stop the spread. Surgical masks and gowns are sitting untouched in warehouses, adding to the concern governments worldwide already had about China's near-monopoly on the global distribution system.

Japanese prime minister Shinzo Abe is so concerned about Tokyo’s dependence on Beijing for life-saving goods and services that he recently announced a $3.2 billion fund to incentivize Japanese companies to move operations back to Japan or diversify to Southeast Asia. Given its extreme reliance on China for precisely the same supplies (30 percent of U.S. PPE imports come from China and 97 percent of the U.S. pharmaceutical market is held hostage to Chinese firms), the United States should follow its allies in Japan and begin bringing some of that manufacturing back home. Some lawmakers, including Sen. Marco Rubio (R-Fla.) and Sen. Josh Hawley (R-Mo.), are attempting to do just that.

Beijing isn’t making many friends on the African continent either. According to the Wall Street Journal, China is refusing to go soft on African countries riddled with Chinese-financed debt (over the past two decades, China has loaned $143 billion to Africa for public works projects and infrastructure improvements). Officials in Zambia and Uganda have reported that Chinese lenders are playing hardball in debt relief talks, demanding control over mining assets and infrastructure as an alternative to monetary payments. It’s a movie that we should be familiar with; when the Sri Lankan government couldn’t pay Beijing back the billions of dollars it loaned to finance the Hambantota port project, it was forced to hand over control of the port and fifteen thousand acres of land to the Chinese for a ninety-nine-year lease.

During a press conference last week, British foreign minister Dominic Raab said that with respect to China, “There’s no doubt we can’t have business as usual after this [coronavirus] crisis.” Raab’s remarks were specific to UK-Chinese relations, but he was speaking for multiple countries across three continents. China may have wracked up a lot of influence over the past decade with its debt-trap diplomacy, trillion-dollar Belt and Road project, and more proactive representation at the United Nations. But the coronavirus pandemic and China’s actions risk undermining some of those achievements.

When this health crisis is over, it’s possible China will no longer have the wind to its back. Multiple countries in Asia, Europe, and North America will not only mitigate dependence on Chinese manufacturing but perhaps even outdo one another on their skepticism of the totality of Beijing’s foreign policy.