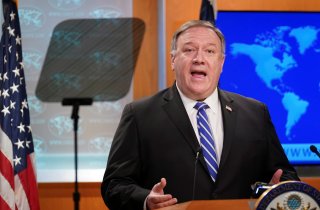 The United States and China have portrayed each other as malign actors as both superpowers struggle to take charge of the global coronavirus response. But the events of Wednesday and Thursday could mark a shift from rhetoric to concrete action.

Rep. Ro Khanna (D–Calif.) told the National Interest that the United States should have a “proportionate response” if China targets U.S. lawmakers, but that “there’s a lot we can do to ratchet down the tensions before then.”

“While the United States and our allies and partners are coordinating a collective, transparent response to save lives, the [People’s Republic of China] continues to silence scientists, journalists, and citizens, and to spread disinformation, which has exacerbated the dangers of this health crisis,” Pompeo said in his Thursday statement.

He referred to a statement released by the FBI and U.S. Department of Homeland Security on Wednesday warning “organizations researching COVID-19 [coronavirus disease 2019] of likely targeting and network compromise by the People's Republic of China.”

China unleashed its own accusations of malign behavior on Wednesday.

“China is extremely dissatisfied with the abuse of litigation by the US against China over the COVID-19 epidemic and mulling punitive countermeasures against US individuals, entities and state officials,” warned the Global Times, the English-language edition of the state-run People’s Daily.

The Global Times claimed that China will add at least four lawmakers and two U.S. “entities” to its sanctions list and “impose countermeasures that will make them feel painful,” citing “analysts” and “sources close to the matter.”

The article pointed out several U.S. policymakers, but singled out Missouri’s elected officials for special criticism.

“China could impose the countermeasures on the relevant states represented by those anti-China lawmakers, including measures targeting trade and exchanges,” the Global Times wrote. “Some Missouri companies, for example, have long-term investments in China and are likely to feel severe consequences if China strikes back with punitive measures in response to the coronavirus lawsuit.”

Missouri attorney-general Eric Schmitt filed a lawsuit in April claiming that the Chinese government had “lied to the world about the danger and contagious nature of COVID-19,” while Sen. Josh Hawley (R–Mo.) is proposing a bill to allow lawsuits against the Chinese Communist Party “for reckless actions like silencing whistleblowers and withholding critical information.”

Republican lawmakers and U.S. officials have implied that the coronavirus was the result of a lab accident covered by the Chinese government.

Democrats have likewise called for investigations. They also voted unanimously in the Senate to push for Taiwan—a self-governing island that China considers its own territory—to have a separate seat at the World Health Organization.

“We need to get public opinion on our side, including public opinion within China,” Khanna said, calling for an independent investigation that would not be perceived as political. “There are a lot of people within China who think the Chinese Communist Party mismanaged the response.”

But the Democratic camp is also skeptical about the lab accident theory, and warns rushing into a cold war with China is a dangerous distraction while the United States faces a serious domestic crisis.

“My point is that, while China bears much responsibility for this crisis, it was not inevitable that a hundred, two hundred thousand Americans had to die,” Sen. Chris Murphy (D–Conn.) said in a recent interview with the National Interest. “The president has run an abysmal response to the virus, which has resulted in it being much worse in the United States than it had to be.”