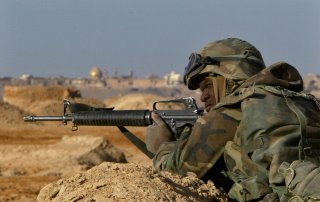 Editor's Note: This essay was a runner-up in the 2020 John Quincy Adams Society/The National Interest student foreign policy essay contest. You can read the other winners here.

Since the Constitution clearly stipulates that declarations of war fall under the purview of Congress, the president should have virtually no ability to unilaterally initiate military operations abroad. Consequently, Congress should repeal the 2001 Authorization for Use of Military Force (AUMF) as it contradicts the Framers’ intent in Federalist Paper 69, subverts the separation of powers framework, and invites the unchecked impulses of a growing imperial presidency.

In designing a constitutional structure that leaves the president with less unilateral power than a monarch, Alexander Hamilton asserted that the president “[has] a right to command the military” while a monarch “possesses that [right] of DECLARING war, and of RAISING and REGULATING fleets and armies by his own authority.” Such separation sought to limit executive power by balancing it with intentionally-designed Congressional inefficiency. Hamilton emphasized this point, saying that a monarch “can perform alone what the [president] can do only with the concurrence of a branch of the legislature.”

Fears of an empowered executive were widely debated during the Philadelphia Constitutional Convention. As constitutional scholar Louis Fisher once acknowledged, the Framers believed that “in their search for fame and personal glory,” executives “have a natural appetite for war.” Framer John Wilson held that the Constitutional structure of checks and balances would not leave war “in the power of a single man, or a single body of men” because “the important power of declaring war is vested in the legislature at large.” The Framers clearly intended that the legislature would hold the president in check. Yet they did not foresee a future where the legislature willingly yields this crucial power to the president.

Beyond the Framers’ intent, presidential precedent recognizes executive limitations. Given the power to lead the armed forces but not to “make” war, the Commander in Chief Clause gives the president the ability to command the military but does not imply the president has prerogative to initiate conflict. President George Washington wrote that “no offensive expedition of importance can be undertaken until after [Congress] [has] … authorized such a measure.” President Thomas Jefferson noted that even in his action against the Barbary States he was “[u]nauthorized by the Constitution, without the sanction of Congress, to go beyond the line of defense.”

The AUMF’s wide scope and unlimited duration also throws into question the integrity of the Constitution itself. By authorizing “all necessary and appropriate force” against a virtually open-ended number of individuals, groups and nations, this broad directive effectively grants the president the power of “declaring war” that the Framers feared of the British King. As Fisher has argued, “Presidential leadership is essential,” but it “cannot operate outside legislative control.” The AUMF effectively removes the Congressional accountability the Framers deliberately installed into the Constitution. Senator Tim Kaine noted in 2016 “that 80 percent of the Members of Congress were not in Congress when the 2001 AUMF was debated.” The AUMF frees the President to go “beyond the line of defense” and initiate “offensive expedition[s]” all without the “sanction of Congress.”

Aside from “repelling sudden attacks,” the president’s ability to initiate military force abroad amounts to a usurpation of Congress’ Constitutional authority and dangerously undermines the separation of powers. Repealing the AUMF to rebalance the constitutional scales would enable Congress to regain its declaration of war mandate and immediately end unchecked presidential power. The Framers were clear; the President should not be vested with the authority to both declare and lead a war. The result of Congress surrendering its war-making powers speaks for itself: decades-long conflict with no accountability to the American people. Senator Kaine also noted that those same 80 percent in Congress “have never had a meaningful debate or vote upon this war against ISIL.” The blank check for presidential war has stood for too long. The Framers understood the blank check’s dangers, and so did some of America’s greatest presidents. By repealing the AUMF and therefore limiting executive authority to initiate war, Congress can take a step to restore the republic that our founders envisioned.

Connor Lambert is a student at Rhodes College. This essay was a runner-up in the 2020 John Quincy Adams Society/The National Interest student foreign policy essay contest. You can read the other winners here.