Coronavirus Means America Is Really Broke. Trump Should Get the Hell Out of Syria. 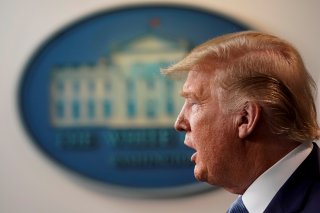 The U.S. is broke. Before the coronavirus made its malign appearance, Washington was set to run trillion-dollar annual deficits this year and as far as we can see beyond. Now revenues will fall and expenses rise this year, at least, as a result of the sharply contracting economy. And Congress is preparing to pass a $1 trillion “stimulus” package on top.

Yet America’s endless wars continue in the Middle East. If the U.S. stopped tomorrow it would end up spending an estimated $6.4 trillion on conflicts which by and large ended disastrously: Afghanistan, Iraq, Libya, Syria, and Yemen. Every day the Trump administration continues to pour good money after bad.

Washington’s promiscuous war-making is discretionary: the Mideast has lost its strategic significance. No one threatens to conquer the oil upon which the West depends. No one threatens the survival of Israel, a regional superpower. What justification is there for Americans to continue attempting to socially engineer one of the world’s most fractious, unstable regions?

It is not enough to say no to any new geopolitical crusades, such as war with Iran, which would be a regional catastrophe. The U.S. should pull out of existing conflicts. Ending support for Saudi Arabia’s depredations in Yemen should be easy. So should be exiting Iraq as anger grows against Washington for trading blows with pro-Iranian militias on Iraqi soil.

Most important is leaving Syria. American officials have spent nine years attempting to shape that conflict’s outcome, so far without success. The administration should withdraw U.S. forces, leaving the region’s powers to sort out that country’s future.

Washington’s involvement never made any sense. President Bashar al-Assad is an evil man who was no friend of America but never threatened the U.S. Nor had Damascus done much to endanger Israel in years. The Syrians did not even retaliate for an Israeli strike on a nuclear reactor being built with North Korean aid.

Syria’s collapse into civil war was a tragedy, though more complex than often portrayed. The Assad government was brutal, but not guilty of genocide: low-tech civil wars typically are bloody and many of the dead were regime supporters. Jihadist insurgents also killed prolifically and brutally, even using chemical weapons. It was the kind of conflict in which one could only wish all combatants ill.

Yet with the absence of a militarily effective, politically moderate movement—America’s attempt to find and aid such fighters was tragically ineffective, even incompetent—the best outcome for Washington was Assad’s survival. Turning a nation-state over to Islamist radicals was the sort of horrid specter typically presented as the reason the U.S. had to intervene in such conflicts. The Obama administration’s willingness to bring about that end, intentional or not, was perverse, even bizarre.

There is much bad to say about Trump’s foreign policy and decision-making process. However, apparently he alone in the administration—the result of his decision to surround himself with only members of the “endless war” crowd—understands the necessity of leaving Syria. When urged in 2017 to reinforce the U.S. military there, he reportedly responded: “I’m not sending any more forces into Syria. Arm the Kurds, take Raqqa, get ISIS out of there, and then get the hell out of Syria.”

Three years later the only proper bottom line remains the same: “Get the hell out of Syria.”

Yet the desire to play social engineer, ignoring religion, geography, history, ideology, interest, and culture, remains strong. Washington Post columnist Josh Rogin recently penned an article on why Americans, as their country slid toward crisis over COVID-19, “should care about Syria.” In fact, the piece brilliantly makes the opposite case.

1. “What happens in Syria doesn’t stay in Syria. A New wave of refugees will destabilize European democracies.” Sure, but those “European democracies” match the U.S. in economic strength and exceed America in population. Let the Europeans, finally, after years of cheap-riding, confront a military problem rather than assume it is Washington’s responsibility. After all, in case they have not noticed, Americans are rather busy with their own problems right now.

2. “The United States has interests all over the region that will be threatened by the rising chaos.” Uh, the Mideast has been a disastrous mess for years. Much of it caused by U.S. policies. Washington destroyed democracy in Iran, blew up Iraq, helped destroy Libya, and is continuing to help dissolve Yemen. Stating that interests are stake does not mean that they are important enough to warrant war, or that military action can save them. What have American policymakers done in the last two decades to suggest they are capable of fixing Syria?

3. “The Islamic State will seize the opportunity to revive itself. Eventually, when strong enough, its fighters will attack Americans wherever they can.” Actually, ISIS broke sharply from al-Qaeda in seeking to create a caliphate, or quasi-nation state, not attack the far enemy, namely the U.S. The only Americans killed by the Islamic State before Washington intervened were those who had traveled to Syria. Anyway, the movement is opposed by every government and a host of groups in the region—Syria, Iran, Iraq, Jordan, Turkey, the Gulf States, Israel, Kurds, Hezbollah—as well as outsiders Russia and Europe. Is the emerging ISIS juggernaut so great that only Washington can halt a revival?

4. If Assad retakes Idlib, “his next target is Syria’s northeast, where several hundred U.S. servicemembers are based, which will make that our problem.” Actually, that is not a problem. Those personnel could and should be withdrawn. They are illegally occupying another country, with neither congressional nor United Nations authority, and for no good strategic reason.

5. “It we remove those troops, we will lose all leverage to push for a political solution.” At one point Assad was on the military ropes while Washington was funding insurgents and a gaggle of other nations, most notably Turkey and the Gulf States, also were aiding his opponents. That “leverage” gained nothing. Today he has won the civil war and is attempting to reconquer the last area, Idlib, under insurgent control. Now Washington’s pressure is expected to force him from power?

6. “The Islamic State and Iran will fill the vacuum.” Actually, the Syrian government, backed by Russia and Iran, is likely to fill the vacuum. One of the essential contradictions of U.S. policy was attempting to eliminate ISIS while overthrowing Assad, the group’s most important enemy. That effort failed as he left America to concentrate on the Islamic State while he targeted other insurgents. Allowed to occupy the rest of his country, Assad would battle any ISIS resurgence. As for Iran, it already is in Syria at the invitation of the government, its presence impelled by insurgencies backed by America. Freer access for Tehran to Syria’s north won’t matter to America, or even to Israel, which has demonstrated its ability to ensure its security.

7. “With just a few hundred soldiers and some help to our allies, the lives of millions can be spared from Assad’s cruel rule.” Having stood by for nine years as civil war ravaged Syria, it is a little late to imagine Washington doing much to protect civilians there. Anyway, exactly how this is to be accomplished is not clear. Surely not by direct U.S. military intervention. Supporting Turkey, which slaughtered Kurdish civilians in Turkey before illegally invading Syria to kill Kurds there, would be a strange step to take in the name of humanitarianism. (Never mind Ankara’s domestic slide toward authoritarianism and Islamism, intervention in Libya’s civil war, and dalliance with Russia.) Nor is leaving Idlib under the rule of a collection of Islamists, led by Hayat Tahrir al-Sham and Hurras al-Din, both connected to al-Qaeda, and other equally dubious jihadist groups, a humanitarian solution. Nor is this in America’s interest. Finally, since Syria, backed by Iran and Russia, is unlikely to voluntarily yield sovereign territory, any U.S. intervention would have to be perpetual, for no discernible American advantage or interest.

8. Citing David Miliband of the International Rescue Committee, “The war in Syria will, dangerously, become a precedent for a new normal for brutal, divisive, contagious conflict.” The conflict has raged for nine years killing upwards of a half-million people. If a precedent might be set, it already has been set. However, the past is filled with equally horrendous conflicts that long raged, slaughtering and destroying indiscriminately: Afghanistan, Burma/Myanmar, Burundi, Colombia, Rwanda, Sri Lanka, Sudan, Yemen, Zaire/Democratic Republic of Congo. Go back in history a little: Algeria, Angola, Cambodia/Kampuchea, Ethiopia, Mozambique, Nigeria (Biafra). Alas, the bloody precedent has been very well established.

9. “If Americans are not convinced by the moral or strategic arguments, consider this: There are at least six U.S. citizens being held as prisoners by the Assad regime right now. … If we leave Syria and don’t insist on playing a role in its future, our chances of negotiating their release go way down.” If Washington’s demand to play a role in Syria’s future hasn’t won their release after eight years—Austin Tice went missing in 2012—it isn’t likely to do so in the future. But if U.S. officials gave up their determination to oust the Assad government, they would have a much better chance of winning the release of people who are, after all, just bargaining chips to Damascus.