Could Joe Biden Get Even Tougher on China than Donald Trump? 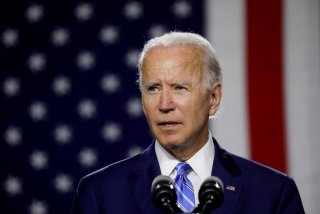 On most issues, President Donald Trump and President-elect Joe Biden spent more than a year insisting they were worlds apart. But on U.S.-China relations, the two candidates competed for the same laurels, each straining at every turn to prove he would be uniquely tough on Beijing. China came up dozens of times in the final debate, with both candidates all but accusing the other of taking personal checks from Chinese president-for-life Xi Jinping. A Trump ad alleged that with Biden, “China is in charge,” while a Biden ad said Trump has “rolled over for the Chinese.”

Now we know which of the two will have the opportunity to put his China-hawk agenda into action. As Biden prepares to take office, U.S.-China relations are already at a nadir. If he governs as promised, he’ll sink them even lower. That would be a grave strategic mistake.

It’s not that Beijing is a good friend to the United States. The Chinese government is in many ways an unreformed communist regime: brutal, untrustworthy, and increasingly militarized. It is a dangerous player to welcome to the stage of great power politics. Yet pursuing policies that needlessly escalate tensions, damage trade relations, create opportunities for military mishaps, and preclude constructive diplomacy is more dangerous still.

China is undoubtedly a rival to the United States, and one with an ideology far afield from the values Washington purports to uphold. But that does not make it prudent to treat China as an enemy and move accordingly toward further economic or military conflict, the results of which could be catastrophic. Biden should pivot away from this hawkishness. He should drop this campaign bravado and instead approach U.S.-China engagement with American interests in mind. That means three things.

First, the primary focus of Washington’s China policy should be mutually beneficial trade, not self-sabotaging trade war or other provocations. The onerous tariffs Trump implemented and the Chinese retaliation they’ve evoked have not restored American manufacturing to its midcentury glory days, eliminated the U.S. trade deficit, or stopped Chinese tech theft. Instead, these policies have been costly for American consumers, who ultimately pay for the government’s tariffs on Chinese goods. They’ve also been devastating for too many American farmers, for whom a federal farm bailout can’t make up for losing market share or one’s entire farm.

Instead of further prosecuting the trade war, Biden should recognize the reality that the U.S. and Chinese economies are extensively interconnected and that most of these connections can’t be severed for the foreseeable future without immense economic pain for both countries. While some limited economic decoupling may be feasible (and could be popular on protectionist and/or national security grounds), both national fates are linked by innumerable points of economic cooperation which it is in the interest of both sides to continue. Allowing that to happen does not mean keeping silent about Beijing’s totalitarianism—if telling the truth means China severs ties with America, so be it—only that Washington should not court conflict with China or inflict needless economic distress.

Second, the impulse to counter Chinese military growth and activity around Taiwan and the South China Sea, in particular by expanding the U.S. military footprint in Asia, is risky at best. China seeks and likely will achieve a degree of regional hegemony, but it is not positioned to attempt global power projection which would endanger core U.S. interests. Its military capabilities are significantly defensive and its maritime power limited by accidents of geography and balanced by the forces of other nearby nations. Putting U.S. troops in close quarters with the Chinese military creates too much opportunity for escalation—perhaps even by mistake—over matters in which Americans need not be involved at all. An aggressive military stance toward China fosters more of a threat than it deters.

Finally, diplomacy must be central to U.S.-Chinese interactions. Recent embassy closures and Washington’s bad habit of treating diplomacy as a reward for other states’ good behavior instead of a means of getting the behavior policymakers want are egregious unforced errors. However much we may wish otherwise, Beijing is a great power with whom Biden will have to deal with constantly—and effectively. That means talking and trading, not dissembling about Beijing’s wrongdoing nor continuing this election season’s reckless “toughness” contest. Policymakers in Washington can learn to live with a powerful China. They must.