Denuclearization Is a Fantasy: Why Trump Should Embrace the Truth on North Korea’s Nukes 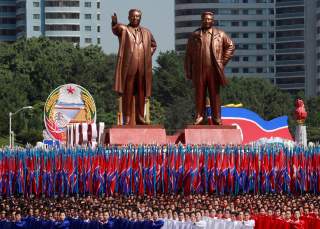 Over the last few months I have become convinced there will never be any dramatic breakthrough when it comes to North Korea until America accepts a basic truth: Pyongyang is a nuclear weapons state and it will never—ever—give up those weapons.

And there is nothing we can do about it—unless you are willing to kill millions of people in the process.

Continuing on with such a silly charade by making denuclearization the focus of U.S. policy towards North Korea is sheer madness. Such stick-your-head-in-the-sand thinking isn’t exactly a formula for foreign-policy success. And yet, this is exactly what Washington is doing today when it comes to Pyongyang—and it’s a recipe for disaster.

Try applying that same standard to other situations in the past and the idea looks even more foolish. Imagine if America refused to have any sort of diplomatic ties with China, Russia, India or Pakistan because they built nuclear weapons?

So why do we cling to such an impossible demand, knowing there is a strong possibility that it will inhibit any possible chance of a permanent easing of tensions on the Korean Peninsula?

One word: accountability. No president wants to go down in history as admitting that America was unable to stop a nation that has an economy the size of Vermont from developing a hydrogen bomb and long-range missiles that, at least in theory, could destroy New York City or Washington, DC.

Such an action also means taking on de facto ownership of years of accumulated mistakes when it comes to dealing with the Kim regime. Simply stated, no one wants to inherit what would be the political fallout—no pun intended.

Therein lies the problem. Because of what seems to be an unresolvable problem, we are destined to go through the same tortured cycle of negotiations with talks breaking down once again as it becomes clear that North Korea never intended to denuclearize. This scenario would be followed by a rise in tensions. Where that could lead is anyone’s guess, but after last year’s protracted showdown with North Korea, a “fire and fury” re-rerun might end this time much more tragically.

I have a better idea. Let’s stop allowing our foreign policy to be driven by fear of having to admit the truth. It’s time to accept—at least privately within the administration, and begin shifting our approach—that yes, North Korea has a large nuclear weapons arsenal that, in its eyes, guarantees its security. And unless we are prepared to wage a war of regime change that will see the use of not only nuclear weapons but likely chemical and biological weapons on an unthinkable scale, then we are forced to confront the situation as it is. That means shifting our goal from North Korea’s nuclear disarmament to a focus on nuclear-arms control, working to cap and eventually the size and scope of its arsenal.

This isn’t a new idea—and a concept I embrace with a heavy heart. For many, myself included up until a few months ago, such thinking would be considered “appeasement” or “surrender” or “weakness.” According to some of the smartest, most sophisticated and respected foreign-policy experts the world over there is only one “solution” to the problem: to contain and isolate North Korea. Maximum pressure, they contended, must continue until North Koreans feel intense pain and see their economy significantly damaged, which will hopefully push them into willingly handing over their nukes.

Unfortunately, as I have explained in several formats, that strategy is toast.

Unless we change direction, what will happen next is clear. The U.S. foreign-policy establishment will say we can try harder by pressuring China and others to implement the sanctions or they will pay the price. That price could even be sanctioning Chinese banks, or, even going so far as kicking them out of the U.S. financial system altogether—possibly risking a financial crisis thanks to the trillions of dollars in assets they hold. But we all know none of that will work, or, just push Moscow, Beijing and Pyongyang closer together. In fact, there is evidence that is already happening.

Now is the time for bold action, actions that could secure peace for all Northeast Asia, ensuring that there will never be a second Korean War. But such a future can only be based on admitting reality—and that might be happening before our eyes. With President Trump dropping the concept of CVID and stating that North Korea is no longer a nuclear threat while also backing away from the idea of a set timeline for denuclearization, one can only hope the administration is slowly but surely shifting its priorities. Otherwise, another crisis in the months and years to come is all but inevitable—and we might not get so lucky this time.

Kazianis on CNBC: The North Koreans "Don't Have any Intention of Denuclearizing."