Designating the Houthis a Foreign Terror Organization Is a Bad Idea 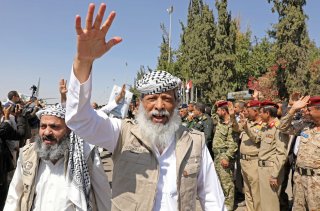 Secretary of State Mike Pompeo recently announced to Congress that the State Department would designate the Houthis—a rebel group in Yemen—a foreign terror organization. Not only will this action fail to advance U.S. interests, it will almost certainly worsen the civil war that has been raging in Yemen since 2014. The incoming Biden Administration will have a chance to correct this ill-considered policy, but the best course of action would be to end American military involvement altogether.

Pompeo claimed the designation is “ intended to hold [the Houthi group] accountable for its terrorist acts” and will also serve to “advance efforts to achieve a peaceful, sovereign, and united Yemen that is both free from Iranian interference and at peace with its neighbors.”

It is not in America’s interest to further sink itself into the morass of Yemen’s civil war by picking one side against the other—and it is farcical to suggest such a designation will, in any way, contribute to achieving peace. It will almost certainly have the opposite effect.

The Houthis are one party to a raging civil war in Yemen that has taken the lives of more than one hundred thousand so far. The war has devastated the country to an unimaginable degree, rendering upwards of 80 percent of the population dependent on foreign relief supplies of food.  Two Yemeni factions oppose each other, one supported by Shia powers in the Middle East (mainly Iran), the other supported by Sunni powers (mainly Saudi Arabia). While this is a tragic, brutal war, it is a microcosm of a long struggle between Sunni and Shia Islam that spans over many centuries. It is not a fight in which the United States should participate.

The Shia Houthis are an indigenous part of the civil society of Yemen and have been in conflict in one form or another with their Sunni neighbors for many decades. Their objectives and goals have been from the beginning, and remain now, to govern themselves, without interference from external powers or from internal Sunni actors. More importantly to the United States, the Houthis are a domestic party to a civil war—they are not an international terror organization that seeks to attack the United States.

Pompeo’s designation will also fail in its stated purpose to help bring peace.  First, it will complicate the international efforts to get humanitarian aid to the innocent populations on all sides of the conflict because the designation includes penalties to countries or organizations who engage with the Houthis, who control roughly 70 percent of Yemen’s population. Second, it will make finding a diplomatic solution almost impossible. If one of the main parties is designated as a terror organization, the other parties won’t negotiate with them.  Regardless of whether one likes or dislikes the Houthis, they are a part of Yemen’s civil society and will have to be part of any negotiated settlement.

As is almost always the case in any ugly civil conflict, neither side is innocent and both engage in brutality against the other. American interests can only be harmed by deepening America’s involvement in the Yemen war. Obama should never have agreed to help Saudi Arabia in the ill-considered war it launched and Trump shouldn’t double down on Obama’s mistake. The incoming Biden Administration has a chance to correct the mistakes of both administrations.

In early 2019, Congress voted to end support for the war in Yemen. The move was ultimately unsuccessful, however, because the president vetoed the measure, ensuring the support would continue. During his presidential campaign, Joe Biden declared that he would end U.S. support for the war in Yemen if he won. There remains considerable bipartisan support in Congress for ending America’s role in the war and many prominent members of Congress hope Biden makes good on his campaign promise.

An overwhelming number of Americans want the United States to end its support, with a whopping 75 percent saying so in late 2018. It would not merely be popular for Biden to end the war, but doing so would improve America’s national security. Not only would it stop spending money on the operations, diverting focus from more important national defense tasks, it would not pointlessly deepen the animosity towards Americans by insurgents in another country’s civil war.

There is nothing to gain by designating the Houthis as a terror group. It won’t help America negotiate an end to their civil war. It won’t improve America’s national defense, and it will continue to drain resources and focus from the U.S. military—which would be better used in ensuring America’s security.

Daniel L. Davis is a senior fellow for Defense Priorities and a former lieutenant colonel in the U.S. Army who deployed into combat zones four times. He is the author of The Eleventh Hour in 2020 America. Follow him @DanielLDavis1.