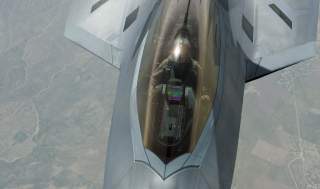 Americans have been told time and time again that the foreign and national security policies of the United States are shifting away from the counterterrorism and counterinsurgency wars of the last two decades to make room for more investment in an environment where great-power competition rules the day. The Trump administration considers countering China and Russia, two “revisionist powers” in the words of the 2017 National Security Strategy, as top priorities. The Pentagon unsurprisingly feels the same way, writing in its own strategy report that “long-term strategic competitions with China and Russia are the principal priorities for the magnitude of the Department, and require both increased and sustained investment…”

So why, despite Secretary Mark Esper’s laser-like focus on moving more of the Defense Department’s assets to the Asia-Pacific, are we still seeing thousands of U.S. servicemembers flying and sailing into the Persian Gulf?

The same day Secretary Esper was reemphasizing the need to pay more attention to China, Gen. Frank McKenzie of U.S. Central Command was on the U.S.S. Bataan advising the sailors and marines aboard the ship that they could be in the region for “quite a while.” The Pentagon’s top civilian and the U.S. military’s top officer in the Middle East were singing from two totally different sheets of music.

Since last May, roughly 20,000 U.S. troops have deployed to the Middle East in what the administration has called a deterrence mission against Iran.  Among those 20,000 troops were 3,000 who shipped off to Saudi Arabia, a country that was forced to shut down half its oil production for a short time last September due to an Iranian cruise missile attack that targeted two of its oil facilities.  The U.S. force posture in the region is now over 80,000 soldiers, sailors, airmen, and marines, a presence spread out over Iraq, Syria, Kuwait, the United Arab Emirates, and Qatar (among others).  All of these deployments, we are told, are required to box the mighty Iranian Empire into lashing out again.

If Gen. McKenzie was being honest, he would probably ask for even more manpower, ISR, funding, and operational discretion. McKenzie wouldn’t be the first commander to do so.  Every combatant commander is addicted to grabbing ahold of a bigger slice of the pie on behalf of his area of operations. Gen. Thomas Waldhauser, the commander of AFRICOM, told Congress last February that his theater was under-resourced.  In his past life as the top U.S. commander in charge of U.S. forces in Latin America, John Kelly complained to lawmakers about similar overstretch. A combatant commander requesting more boots, planes, ships, and drones is the normal course of business; it would be more shocking if such a request wasn’t made.

Money, personnel, and hardware, however, don’t grow on trees. Not even the United States has unlimited resources. Every asset sent to CENTCOM is one less asset that can be utilized in the Indo-Pacific, where the Chinese are making a play for dominant status.  All of which is a long way of saying that if administration officials are interested in implementing the strategy documents they spent months writing, the president and his national security team can’t continue living in Narnia and pretending sacrifices don’t need to be made.

Washington isn’t very good at setting priorities and actually sticking with them. There is a belief, if not an entire ideology, that exists inside and outside government that the United States can do it all. Only later, U.S. officials come to find out that doing it all is neither strategically smart or fiscally sustainable.

If President Trump doesn’t want to become the commander-in-chief that accelerated the demise of his own great power strategy, he can start by refusing any additional requests for more troops in the Middle East.  Better still, he can give many of those troops new tasking orders.