Did the Trump Administration Just Throw Iran a Coronavirus Lifeline? 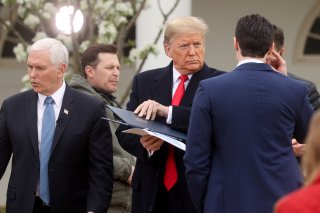 The Central Bank of Iran is expecting foreign countries to release Iranian assets that had been frozen due to U.S. sanctions, in order to help the country deal with an escalating novel coronavirus disease (COVID-19) outbreak.

U.S. sanctions have held up billions of dollars of Iran’s money in foreign bank accounts. But the coronavirus crisis, which has killed over two thousand Iranians, has prompted international calls to end the U.S. “super maximum economic pressure” campaign against Iran.

“Those assets had been frozen in other countries under pressure from the U.S. government. According to the news we have received, these resources will probably be unfrozen,” Abdolnasser Hemmati, head of the Central Bank of Iran, told reporters outside of a cabinet meeting on Wednesday. “We have assigned the Central Bank experts to make sure that the resources being freed gradually will be spent on public welfare.”

The additional revenue could allow Iran to implement the costly lockdown procedures that other countries have adopted to stop the spread of the coronavirus.

“In good and normal economic conditions, we would be able to implement a quarantine,” Tehran mayor Piruz Hanachi had said last week. “However, the next steps for quarantine—such as supplying necessities and compensating losses—is not possible across the country.”

The Central Bank of Iran holds about $68.8 billion in international reserves, according to an estimate by the International Monetary Fund. Much of this money is payment for oil, which Iran has been unable to access these oil revenues after the Trump administration revoked permission for foreign countries to buy Iranian oil in May 2019.

China, India, Italy, Greece, Japan, South Korea, Taiwan and Turkey were allowed to buy Iranian oil at the time. Since then, Iran has only been able to sell small amounts of oil through smuggling, and customers run the risk of being hit by secondary U.S. sanctions.

Brian Hook, the U.S. State Department official overseeing Iranian affairs, estimated in December 2019 that Iran can only access ten percent of its foreign currency reserves due to U.S. pressure.

The Trump administration has refused to loosen its pressure campaign despite the coronavirus pandemic, insisting that the Iranian government is unlikely to spend its revenues on relief efforts.

“Since 2012, the regime has spent over $16 billion on terror abroad – the Iranian people know that any sanctions relief would go to sponsor terrorist, not humanitarian activities,” a State Department spokesperson wrote in a memo to journalists titled Iran: COVID-19 DISINFORMATION FACT-SHEET. “If regime officials are looking for funds to combat the outbreak, they can start by returning money they stole from the Iranian people.”

But as calls for sanctions relief from European allies and members of U.S. Congress mount, the Trump administration could be rethinking its stance.

Esfandyar Batmanghelidj, founder of Bourse & Bazaar, said that unfreezing Iran’s foreign assets would be “a sign that [the U.S. Treasury] has given some additional comfort to a few central banks among Iran’s former oil customers.”

“[W]e have to wait and see” if this is true, he told the National Interest.