Digital Authoritarianism in Bangladesh: What You Need To Know 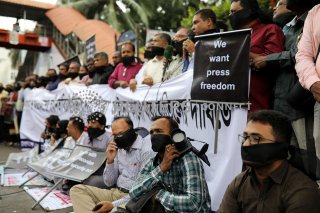 On October 13, the home ministry of Bangladesh government issued a statement “forbidding people at home and abroad from spreading ‘false, fabricated, confusing, and inciting statements’ on social media about government, military, police officials and members of different other law enforcement agencies.”

The statement went on, “The government has observed the activities of such people with patience and has come to the conclusion that it is necessary to take legal action against such people to maintain the stability, domestic security and public well-being.” The statement also threatened legal actions “according to the law of the land” against the public. Presumably, the cited law of the land is the 2018 Digital Security Act. On October 7, the Department of Secondary and Higher Education directed students and teachers to refrain from “writing, sharing, "liking", or posting anything that ‘ruins the image of the government or the state’, or ‘disrespects any important person, institution or profession’” on social media.

The government’s effort to restrict freedom of expression online has not been limited to circulating statements. In June of this year, Bangladesh police arrested a fifteen-year-old boy near Dhaka for allegedly “defaming” the country’s Prime Minister Sheikh Hasina in a Facebook post. After a local supporter of the ruling Awami League filed a case accusing that the teenager had “badmouthed...our mother-like leader,” the boy was quickly arrested and sent to jail. Earlier in June, two university teachers were arrested and sent to jail for allegedly mocking the former health minister on Facebook who died of coronavirus. All three of these cases were filed under the Digital Security Act, and these cases are not exceptions. Critics have dubbed the law as draconian, and with good reason.

The Digital Security Act 2018 was supposed to replace the infamous Information and Communication Technology Act (ICT) 2006, in particular section 57 of the act. Section 57 has been used extensively to crackdown on dissenting voices of journalists, academics, human rights activities, and members of the public especially since the controversial 2014 national election. Yet, the Digital Security Act (DSA) reinforced even more punitive measures to curb freedom of expression and freedom of the press. The act authorizes law enforcement agencies to search or arrest anyone without any warrant and imposes harsh prison sentences for vaguely worded offenses—including online defamation, hurting a person’s religious feelings, and spreading propaganda and campaigns against the liberation war of Bangladesh others, among other things.

Since its implementation in October 2018, more than 1,000 cases have been filed under the act against ordinary citizens, activists, academics, and journalists for “criticizing” the government policies or its political leadership. The number of cases and arrests under DSA has significantly increased since the beginning of 2020. A UK based media-watchdog reported that from January to June of 2020, 113 cases have been filed accusing a total of 208 people, of whom 53 are journalists. Of the accused, 114 were arrested immediately. In May, at least 11 people were charged with “spreading rumors and misinformation on Facebook” for posting about the government’s ill-fitted response to the pandemic. At this rate, there have been three cases on average per day leading to an anticipated 60 percent increase in the number of cases and arrests in 2020 under DSA.

The Digital Security Act came into effect in October 2018, months before a national election that secured a consecutive third term in government for the ruling Awami League party. When Awami League won a landslide victory in 2008 after two years of an unelected military-backed government, it presented hopeful possibilities for a return to democracy. Yet, in 2011, the government took advantage of its majority in the parliament to remove the Caretaker government provision that, until its removal, mitigated deep mistrust between the Awami League and the Bangladesh Nationalist Party, the country’s main opposition party. The provision also ensured relatively fair elections and peaceful changes of power. This caretaker provision, in essence, called for a temporary government to be appointed as polls approached in order to oversee a smooth and fair election process. The next national poll, in 2014, was boycotted by the Bangladesh Nationalist Party, witnessed unparalleled election violence, and led to 153 out of the 300 parliamentary seats going uncontested. This resulted in a “legally and constitutionally legitimate” yet morally questionable election victory for Awami League.

The 2014 election also marked a decisive turn towards authoritarian practices. Following the election, section 57 of the Information and Communication Technology Act was used to operationalize a deliberate campaign to silence dissenting voices in the press and among citizens. Political opposition members including the former Prime Minister Khaleda Zia, among others, were jailed. In addition, the government instigated an anti-narcotics drive leading to significant increases in extra judicial killings ahead of the 2018 election. Human rights organizations and civil society alleged that the anti-narcotics drive “was a government effort to exert increased political control over the populace.”

In the national election of December 30 of 2018, the ruling Awami League led alliance won 288 of the 300 parliamentary seats, an overwhelming 90 percent of the vote. Such a rate of victory, however, has been questioned and is widely believed to be rigged as witnesses reported ballot-box stuffing, intimidation of voters, and election violence.

Reinforcing the government’s determination to restrain civil and political rights, an effort that began in 2014, the unparalleled number of cases and arrests under the Digital Security Act in Bangladesh demonstrates Dhaka’s authoritarian behavior. It also makes the country an embodiment of a global phenomenon—the rise of digital authoritarianism.

In recent years, internet and social media platforms have become highly useful tools for authoritarian regimes. Authoritarian and repressive governments are surveilling and repressing dissent not only by creating restrictive laws such as the Digital Security Act in Bangladesh or the new internet law in Turkey, but also by taking active legal steps against citizens for expressing critical opinions on the internet.

Of the 65 countries assessed for the 2019 Freedom on the Net report by Freedom House, law enforcement agencies in 47 of them arrested people for posting political, social, or religious content online. Additionally, 40 of the 65 countries instituted advanced social media surveillance programs. For 15 of these 40 countries using advanced social media surveillance, such programs have either expanded or been newly established. As a result, 89 percent of internet users around the world, close to three billion people, are being monitored on social media, the 2019 Freedom House assessment reported.

Efforts to control the internet and social media reflect governments’ concerns about their ability to maintain domestic political control. Governments that perceive their power or legitimacy to be threatened by a mass display of dissatisfaction online or through protests are more likely to enhance restrictive measures online. Such restrictive measures online are aimed to limit the role of the internet and social media in spreading critical discourse or mobilizing protests. This is evident by how quickly governments in India, Hong Kong, Bangladesh, and Belarus—among others—have suspended, shut down, or slowed down internet connections amidst protests.

In Bangladesh, digital authoritarianism is reflected not only through the Digital Security Act but also through the state’s increased capacity for internet and social media surveillance; increased arrests based on political content; the tendency to block critical websites, including local and international news sources; and the limits placed on internet access—and particularly following critical moments such as anti-government protests and national elections.

The government has also repeatedly blocked or threatened to block social media platforms, and particularly Facebook—which is arguably the country’s most-used social media platform. In addition, the government has established significant control over online content. It has also been accused of state-sponsored monitoring and hacking of Facebook accounts of journalists, political dissidents, and opposition figures.

Although the DSA is a relatively recent development in controlling cyberspace in Bangladesh, it highlights a larger problem in the country.

First, it demonstrates the government’s authoritarian behavior both online and offline. Before the implementation of the Digital Security Act, a similarly draconian law—section 57 of the ICT Act—was used for the strategic silencing of any criticism of the government and for curbing press freedom. Overall, an astonishingly high number of enforced disappearances, crackdowns on any critics, jailing of political opponents, and the routine targeting of democracy advocates and citizens under the Digital Security Act show the abysmal state of civil and political rights in the country. The most devastating impact of these actions is perhaps that self-censorship has become a common practice—so much so that Human Rights Watch reports that news editors themselves suppress 50 to 90 percent of the news at hand. Given the government’s repressive behavior both online and offline in recent years, by no measure can the country be called democratic.

Second, like everywhere else where governments are practicing tactics of digital authoritarianism, Bangladesh’s actions are aimed to limit the spread of unfavorable information, particularly during critical moments such as a large-scale road-safety protest in 2018, the 2018 Election, and even coronavirus. The 2018 road-safety protests, led by students, began after two students were killed by an unlicensed bus in Dhaka in early August and spread quickly across the city. One may argue that the protests were fueled by accumulated anti-government sentiments in an ever-shrinking space for freedom of expression. When the prominent photojournalist Shahidul Alam pointed out these underlying causes of the protest in an interview with Al Jazeera, he was arrested within hours of the interview and detained for 102 days. During the protests, the government shut down mobile internet service as the protests utilized social media platforms to mobilize. Additionally, during the national election in December 2018, two journalists were arrested while covering the 2018 national election under the Digital Security Act for “false information” about voter-turnout. Several others were attacked and denied entry to polling centers.