Diplomacy With Iran Will Serve U.S. Interests in Eurasia 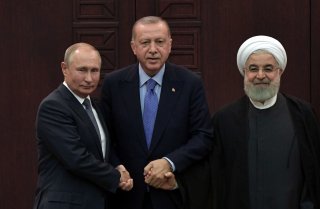 With the Biden administration’s stated intention of restarting the 2015 Iran nuclear deal, a welcome opportunity to reengage with diplomacy in a troubled part of the world could well be on the horizon. Even if that intention is imperiled by recent actions in Syria, it is imperative that no more such provocations occur for the long-term interests of U.S.-Iranian relations. From being able to exit various proxy wars to normalizing trade in the Persian Gulf, the necessity of using diplomacy first to engage with Iran is becoming more apparent to many in Washington, DC. What should also be considered, in addition to the immediate benefits of reconstituting the nuclear deal, are the long-term geopolitical opportunities that would open up throughout Eurasia if and when U.S.-Iranian relations are ever properly normalized.

Iran occupies a position of immense potential within the general nexus of Eurasian power politics. Over 80 million people live in a defensible plateau that directly connects the energy hub of the Caspian with the ocean-connected Persian Gulf. The terrain is eminently defensible to outside attack. Iran is also currently undergoing a demographic boom of prime, economically impactful workers. The country is highly urbanized and has a robust and growing literacy rate. Its nominal GDP hovers around the lower end of the top thirty in the world despite the massive amount of international diplomatic and economic isolation imposed by sanctions from abroad. The question immediately becomes what the Iranian economy would look like unfettered and fully allowed access to the international market.

To U.S. policymakers this might seem like a concern, but it is an opportunity for those interested in breaking with foreign policy orthodoxy. Even in a best-case scenario, Iran is no future global power on the scale of China, Russia, or India. What it does do, however, is occupy an important potential space between those countries and a highly independent inclination from all of them. With the rhetoric of the policymakers in the United States clearly moving towards a stance of great power competition, it is worth considering that a more normalized and successful Iran could serve as a critical bulwark in preventing one alliance from dominating the Eurasian landmass in the future. This can only be done by the Iranian position being secure enough not to have to rely on more powerful nations for its protection from outside attack or economic blockade.

Syria becoming more dependent on Moscow the longer it faces a rebellion supported by neighboring rivals shows the dangers of driving smaller countries into positions of necessity with sanctions and an aggressive posture. Should Iran face another concerted effort at either regime change or further economic strangulation it may find itself in a similar position and beg for assistance from Beijing or Moscow, decreasing its independence and increasing the influence of powers that rival the United States. Indeed, Russia and Iran are already pseudo-rivals in Syria, sharing common enemies but different overall objectives in that country.

A more normalized Iran on the world stage would be likely to play a key role as a regional balancer, always seeking to maximize its autonomy vis-à-vis all of the great powers, not just against the United States. With multiple countries competing for the right to have foreign direct investment in the Iranian oil industry coupled with its regionally strong defensive capabilities, Tehran would be in the position to present alternatives to easy great power expansion by overly ambitious powers for the simple fact that it could counter-balance against such efforts in order to maximize its autonomy. Furthermore, the continuing deterioration of U.S.-Turkey relations shows the wisdom of having more than one independently-minded medium-range power in the region with some diplomatic connection to Washington who is strong enough to stand on its own.

If U.S. policymakers want to maximize their long-term options for an increase in diplomatic power without the need for more military interventions, they would be wise to consider that the restarting of the Iranian nuclear deal could be merely the beginning of a new phase in Washington-Tehran relations. One where Iran plays a role contributing to the long-held goal of U.S. geostrategists: the prevention of one major power or alliance network dominating the Eurasian supercontinent. The way ahead may be difficult, and many challenges have yet to be overcome, but for those skeptical of constant interventionism in the pursuit of global hegemony and who are seeking new approaches to diplomacy, it may well be worth the time to try to normalize relations between Iran and the United States in a truly long-term way. Stopping current military actions in favor of full diplomatic engagement is the only way to bring this about.

Christopher Mott is a fellow at Defense Priorities, a former researcher at the U.S. Department of State, and the author of The Formless Empire: A Short History of Diplomacy and Warfare in Central Asia.