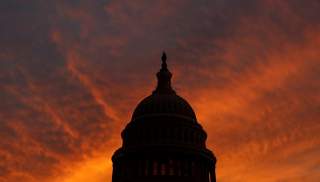 President Donald Trump promised to put America first in his foreign policy. He hasn’t had much success—U.S. forces are still fighting every “endless war” he promised to stop—but at least he theoretically has his priorities right.

In contrast, Congress appears to hate America. Legislators of both parties consistently put other nations first.

There are occasional exceptions, such as Saudi Arabia and Turkey, when the president acts on behalf of foreign governments while Congress targets regimes fundamentally hostile to American interests and values. In most cases, however, it is the legislative branch that acts as if it believes its duty is to represent other countries.

For instance, Congress has consistently acted as the first-line defense for antiquated, Cold War alliances. The latest National Defense Authorization Act would bar the use of funds to withdraw from NATO and set a minimum U.S. garrison of 22,500 troops in South Korea.

The transatlantic alliance and the faux “mutual” defense treaties with Japan and Republic of Korea made sense after World War II and the Korean War. Friendly states had been ravaged by war and were threatened by aggressive authoritarian adversaries. America’s protection allowed them to revive and rebuild.

Today, however, Europe enjoys an equivalent economy and a larger population than the U.S. The continent has ten times the economic and three times the population strength of Russia. Italy’s economy alone matches Russia’s. Japan long possessed the world’s second-largest economy. The South has roughly 53 times the GDP and twice the population of North Korea.

Yet proposals that Washington shift rather than share defense burdens cause hawkish legislators to run screaming from their respective chambers. Rather than expect allies to learn self-reliance, members maintain the Pentagon as a welfare agency. Horrified that foreign defense dependents might fear being cut off, legislators rush overseas to “reassure” alliance partners. A few years back Congress even approved a “reassurance initiative” increasing America’s financial and troop commitment to the continent. No wonder most European states don’t take defense seriously: they would be fools to do so when Washington is determined to handle it for them.

So, too, the determination to preserve security guarantees and troops deployments in Asia. Seoul long has been able to defend itself. Why should Americans continue to foot the bill?

Tokyo has enjoyed saving money at Washington’s expense by pointing to the U.S.-imposed constitution with Article 9, which forbids possession of a military. Instead, the Japanese government concocted an under-funded “Self-Defense Force” which until recently was not even allowed to defend American naval vessels which sailed to Tokyo’s aid. In Iraq, other allied troops had to protect the Japanese contingent, which was not allowed to take up arms.

What to make of the frenzied insistence that America must protect Ukraine? It has no security importance for the U.S.: throughout most of our nation’s existence, Ukraine was part of the Russian Empire and the Soviet Union. Economically backward and politically divided, the country has been undermined by pervasive corruption. It adds little to the West’s strength while intervening on its behalf risks conflict with nuclear-armed Russia.

Moscow has treated its neighbor badly, but imagine how the grandees of Capitol Hill would have reacted were the situation reversed: Russia sponsored a street putsch against a democratically elected, pro-American government in Mexico, and offered the new regime membership in the Warsaw Pact. Lindsey Graham and his fellow ultra-hawks would be doing the Maori Haka down Pennsylvania Avenue, demanding war.

Washington should leave support for Ukraine to Europe while forging a passable relationship with Moscow. The West has encouraged the latter to leap into China’s arms while causing mischief elsewhere, such as in the Middle East, North Korea, and Venezuela. Sympathy for Ukraine does not justify endangering Americans.

Even more bizarre is the almost unanimous insistence that Washington defend the Syrian Kurds. The Founders insisted that Congress act to protect the people from promiscuous war-making that was characteristic of European monarchies. Legislators today do not have sufficient cojones to take a stand and vote to authorize U.S. military involvement in the Middle East. Instead, presidents unilaterally take the country into conflicts, often based on manipulations and lies, while Congress studiously refuses to fulfill its constitutional responsibility.

Legislators refused to authorize the president to battle the Islamic State, overthrow Bashar al-Assad, steal Syria’s oil, protect the Kurds in Syria (or elsewhere), confront Russia, toss Iranians out of Syria, or stop Ankara from invading Syria, whose sovereignty Washington no longer seems to recognize. Yet at one time or another, the president was expected to do all of those things, most of which had nothing to do with Americans’ interests.

The Kurds are a sympathetic people, though hardly as angelic as portrayed. They fought ISIS out of interest, not charity, and such battlefield cooperation does not yield any duty to protect them thereafter. Their best strategy always was to make a deal with Damascus, allowing the latter to retake the border and exclude Turkey.

If legislators really believe America has a duty to protect the Syrian Kurdish enclave, how do they define Washington’s responsibilities? Are Americans bound to stay forever to defend the Kurds and all lands claimed now or in the future from every danger, whether known or unknown? For good reason, presidents negotiate and Senates ratify treaties: then the terms are known.

Endless commitments and wars, especially in the ever unstable and hostile Middle East, risk the American homeland. Terrorism does not occur because Americans are so virtuous. Rather, terrorism is the poor man’s weapon against a superpower able to deploy carrier groups, army divisions, and air wings to bomb, invade, and occupy other nations. Endless war creates the very enemies cited as its justification.

Legislators should put the interests of Americans first. The first step is making war a genuine last resort. The most effective way for Congress to do that is to take seriously its power to say no.