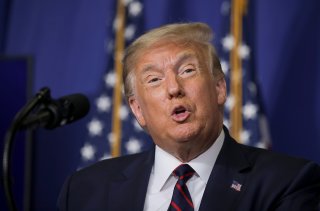 Several thousand U.S. troops leaving permanent stations in Germany will soon be redeployed to the Asia-Pacific region to counter Chinese power from locations including Guam, Japan, and Hawaii. “In that theater, Americans and allies face the most significant geopolitical challenge since the end of the Cold War,” National Security Advisor Robert O'Brien argued in a Wall Street Journal op-ed, describing a plan that was implemented in late June. Thus, he said, “U.S. forces must be deployed abroad in a more forward and expeditionary manner than they have been in recent years.”

The implicit suggestion that U.S. forces have not been deployed in an expeditionary manner in recent years would be laughable were it not coming from the White House. The reality, of course, is that the last two decades of U.S. foreign policy have seen one expedition after another; that few, if any, of them have arrived at any real resolution; and that none have proven a success.

To be sure, this shift will differ in tactics from recent expeditions past, moving from land campaigns to an AirSea Battle concept introduced during the Obama years. It will see U.S. forces based relatively safely in U.S. territories and on allied soil and not, as in the Middle East and North Africa, significantly in nations subject to civil war, insurgency, terrorism, and U.S. and/or other foreign occupation. However, in marked contrast to American wars against weak regimes like Saddam Hussein’s Iraq or non-state actors like the Islamic State or the Taliban, it will risk plunging the United States into a great-power conflict with a near-peer competitor. At worst, it will risk existential injury to the United States.

While increasing the chance of war, the Trump administration’s pivot to Asia will needlessly sap U.S. resources and deteriorate U.S.-China relations. The costs and dangers here are evident: Even if Trump gets the payments he wants from South Korea and Japan to subsidize large U.S. deployments there—which is by no means certain—maintaining a “more forward” military in the Pacific region will add to an already extravagant and unstrategic Pentagon budget.

China’s reaction is easily predictable, too. U.S. efforts to curtail Chinese dominance in a region far from Washington but close to Beijing are not appreciated. “The fundamental cause of instability in the South China Sea is the large-scale military activities and flexing of muscles by some nonregional country that lies tens of thousands of miles away,” a Chinese Foreign Ministry representative said in a statement this month with but the gauziest of veils.

A comment from the Chinese military after U.S. naval exercises in April was more direct, openly accusing the United States of violating international law and Chinese sovereignty, “artificially” increasing security hazards in the Asia-Pacific area, and creating dangerous opportunities for “unexpected incidents.” That last bit is as much fact as a threat: Operating the world’s most powerful and second-most powerful militaries in close quarters in disputed ocean territories does risk an unintended, even accidental, conflict that could intensify into a catastrophic war.

The primary question, then, is about necessity. O'Brien says these deployments are required for U.S. security—but that is far from obvious. Chinese domination of its near abroad may not be desirable but it does not pose an existential threat to the United States—certainly not a threat on the scale risked by escalating negative U.S.-Chinese relations.

“The U.S. spends two and a half times more than China on its military, and there is no evidence China has ambitions to match or replace [the U.S.] global military machinery,” the Eurasia Group Foundation’s Mark Hannah and the Center for International Policy’s William D. Hartung explained at CNN this month. “One analyst suggests that fully half of China's military is devoted to border or internal security, limiting its ability to project power beyond its borders.”

As Hannah and Hartung also note, polling from the Eurasia Group Foundation shows most Americans “favor recalibrating America’s presence downward” to respond to China, preferring to rely “on regional allies in Asia who, with a reduced American military presence, could move toward defending themselves by taking over greater responsibility for security in the region.”

China has a weaker military than the United States, and Beijing is preoccupied with domestic and regional problems and projects. It is hemmed in by reliable U.S. allies in South Korea and Japan and deterred from grander ambitions by U.S. military might. If anything, bulking up the American military presence in the Asia-Pacific region could convince Beijing it is under threat and provoke a conflict that would not occur under a more restrained U.S. approach.

China’s focus on anti-access/area denial in its defense strategy should be an indicator of how jumpy Beijing is likely to be about perceived regional encroachment by the United States. The costs and risks we would shoulder by expanding U.S. military action to counter China are neither necessary nor prudent, and they are not what Americans want.