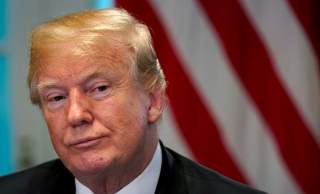 In his remarks at the Meridian International Center in Washington this month, National Security Adviser Robert O’Brien made news. In the not-too-distant future, O’Brien said, the United States and Russia will sit down and begin a serious discussion about salvaging a brittle arms control regime.  “I think we will start negotiations soon on arms control, on a nuclear issue, which is important for the safety of the world, for every country, not just the United States and Russia,” O’Brien told the audience.

Preserving what is left of the arms control regime and building on it is an act of much-needed common-sense. But if the Trump administration is genuinely committed to moving forward, it should start the process by extending the one agreement keeping the U.S. and Russian nuclear arsenals from spiraling out of control.

New START, a treaty ratified by Washington and Moscow in 2010, is a pragmatic deal at its core. Under the accord, the United States and Russia are entitled to deploy no more than 1,550 nuclear warheads on a maximum of 700 deployed launch platforms.  Both nations are also permitted to engage in 18 mutual inspections every year. Washington and Moscow have each completed a total of 162 inspections in the nine years New START has been in effect. In addition to the Open Skies Treaty—which the U.S. may withdraw from—New START is one of the few measures promoting a degree of transparency between the world’s two largest nuclear weapons powers.

This transparency and predictability will expire if New START is not renewed by February 5, 2021. Simply allowing the agreement to die without a replacement would be the worst of all worlds, eliminating Washington’s ability to verify the quantity, quality, and overall disposition of the Russian nuclear weapons program.  Russia would also lose access to the U.S. arsenal, reducing the type of information that provides both countries with a semblance of confidence about each other’s intentions.

This is likely why Russian officials are concerned about New START suffering a slow and painful death.  Russian President Vladimir Putin, Foreign Minister Sergey Lavrov, and Deputy Foreign Minister Sergey Ryabkov have all publicly expressed their support for an immediate extension of the treaty without preconditions.  They aren’t alone: while Vice Chairman of the Joint Chiefs of Staff John Hyten hasn’t officially recommended an extension, he called the inspection powers under the accord “hugely beneficial” to Washington’s strategic planning when he was the commander of U.S. Strategic Command.

During his first call with Putin, Trump described New START as just another bad deal negotiated by the previous administration that provided Moscow with too much and Washington with too little.  Trump remains convinced that the best way forward on arms control is not a renewal of New START, but rather enticing China to join a trilateral strategic dialogue en route to a tripartite agreement covering weapons from strategic warheads to hypersonic missiles.

While the administration deserves credit for thinking big, it is letting its imagination guide policy when reality should be the sole driver.  As ideal as a U.S.-Russia-China nuclear weapons agreement would be, Beijing has consistently stated that it will take no part in such a framework.  In China’s view, it doesn’t make sense to cap its arsenal of roughly 300 warheads when Washington and Moscow both have over 6,000 apiece.  It is highly unlikely Beijing will change its position between now and when New START expires.  For Washington to continue to hold New START hostage to China’s position—a position unlikely to change within the next year—is reckless policy.

Negotiating comprehensive arms control agreements requires an extreme amount of time and even more patience. The 1987 Intermediate-Range Nuclear Forces Treaty was the product of years of back-and-forth between President Ronald Reagan and Soviet Premier Mikhail Gorbachev.  The Joint Comprehensive Plan of Action took three years of talks, many of which were contentious.  It will take far more than a year for the Trump administration to finalize a grand nuclear deal with the Russians—never mind adding China to the mix.

For the United States, the sensible choice is already here: accept Moscow’s offer of an unconditional extension of New START—the only treaty preventing both nuclear superpowers from expanding their arsenals—and use the additional time to explore a stronger arms control regime applicable to a greater number of parties and strategic weapons systems.

At a time when U.S.-Russia ties are in danger of falling off the cliff, saving New START will preserve some desperately needed stability in the broader relationship.