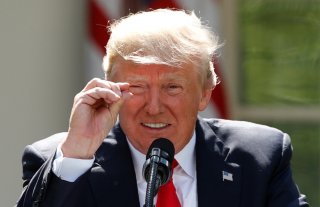 Iran has claimed that Switzerland delivered a message from the United States “to demand Iran not to give a response” to the killing of Maj. Gen. Qassim Suleimani, confirming months-long speculation about the Swiss diplomatic channel.

Suleimani’s death at the hands of U.S. forces in Iraq on January 2 sparked a near war between the United States and Iran. Reports at the time suggested that the United States used the Swiss Embassy to deliver a message asking Iran not to retaliate, although officials on both sides refused to confirm this on the record.

“The U.S. had sent a message to Iran via the Swiss ambassador (whose mission also acts as Washington’s interests section in Tehran) to demand Iran not to give a response, but it was rejected immediately,” he told the state-run Fars News Agency.

The U.S. State Department confirmed the substance of Baharvand’s comments without commenting on the Swiss channel.

“We have repeatedly made clear to the Iranian government that any attacks against U.S. citizens and interests would not be tolerated,” a State Department spokesperson told the National Interest.

Switzerland had already confirmed that it had delivered a U.S. message to Iran on January 3, although Swiss authorities have not publicly revealed the contents of the message.

Iran eventually did retaliate, launching dozens of ballistic missiles at a U.S. airbase in Iraq on January 7, injuring over one hundred U.S. troops. Iran reportedly used the Swiss Embassy and other channels to tell the United States that it was done retaliating.

No further attacks by either side occurred, although U.S. forces have clashed with Iranian-backed militias in Iraq in recent months.

Switzerland has been a key conduit for messages between the United States and Iran since 1979, when Iranian revolutionaries stormed the U.S. Embassy in Tehran. The two countries broke off relations the next year, and now communicate only through the Swiss Embassy in Tehran and the Pakistani Embassy in Washington.

The United States also maintains a “humanitarian mechanism” through Switzerland that is supposed to allow Iran to pay for food and medicine from foreign companies through Swiss banks.

“He and I have been in daily contact for the last few months,” Hook said. “Markus does a superb job and he serves in the Swiss government with great distinction.”