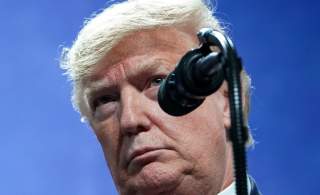 Since the assassination of Iran’s Qasem Soleimani, President Donald Trump has been regaling campaign audiences with stories of the operation. He has said little about the justification for the operation and more about his place in the center of the action. At one rally the president even described the moment of Soleimani’s death: “Then, all of a sudden, boom.”

Maybe this will help with his political base, though a majority of Americans believe his action made the country less safe. And worry people should. The strike is likely to generate increasingly costly blowback, especially if he tries to profit politically from the attack.

The problem is reflected in his short speech last week on Iran, which could have created a new path for Washington-Tehran relations. Unfortunately, the president

mixed fantasy with half-truth and ensured continued confrontation between the two countries. Despite the widespread relief caused by what appeared to be a mutual step back by Washington and Tehran from the brink, war remains a serious possibility, at least as long as Donald Trump sits in the Oval Office.

Candidate Trump ran for president in 2016 promising to end America’s endless wars. He joined Rand Paul in criticizing the Iraq War, challenging GOP orthodoxy before a naturally hawkish South Carolina debate audience. He probably owed his election to normally Democratic blue-collar voters who chose him over Hillary Clinton, the Democratic war queen who made Neoconservatism bipartisan.

However, his commitment to restraint and peace turned out to be rhetorical rather than practical. He increased the number of troops in Afghanistan; his negotiations with the Taliban ensure almost permanent entanglement, with forces in Afghanistan necessary to enforce any agreement. The administration continues to support Saudi Arabia’s criminal aggression against Yemen, which has created today’s world’s greatest humanitarian crisis.

In Syria the president adopted President Barack Obama’s interventionist policy, even sending U.S. troops to lawlessly occupy Syrian oilfields. Trump proposed stealing the oil to help pay for an operation which has been authorized neither by the U.S. Congress nor UN Security Council. His aides appear determined to use personnel tasked with this illicit mission to confront the Syrian government and its many allies, Iran, Lebanon’s Hezbollah, and Russia, again without legal authority or security justification.

Then there is Iran, upon which this administration has been waging war, economic, political, and military. What explains Trump’s almost juvenile fixation on Tehran? One reason might be hatred of Barack Obama, who counted as an achievement the Joint Comprehensive Plan of Action. Also important is the near stranglehold on U.S. Mideast policy which the president appears to have accepted by Saudi Arabia’s Crown Prince Mohammad bin Salman and Israel’s Prime Minister Benjamin Netanyahu. Both seem, or at least until recently seemed, only too happy to fight Iran to the last American. And Trump has been ready to oblige.

With his speech he appeared to pull back, however, a small favor for which we should be grateful. However, his presentation highlighted the mistakes, failures, misconceptions, and lies upon which his policy is based. With such a flawed foundation, U.S.-Iran relations are likely to be dominated by confrontation.

For President Trump, like so many other American policymakers, history began yesterday or the day before. There is no recognition that the fraught U.S.-Iran relationship goes back before Tehran’s latest outrage or even Barack Obama’s presidency. Nor is there the slightest recognition that Washington’s actions might have something to do with Iran’s behavior.

Yet the Iranian people should be forgiven for believing that Washington has been targeting them at least since 1953, when the CIA helped overthrow the country’s last democratic government. In the 1980s the Reagan administration supported the invasion of Iran initiated by Saddam Hussein, the bloody tyrant later removed as a danger to America. The administration provided intelligence, reflagged Kuwaiti tankers carrying oil sold to keep the Iraqi war machine running, and provided components of chemical weapons unleashed on Iranian troops. In 1988 an American ship on patrol in the Persian Gulf shot down an Iranian passenger plane, killing 290 people. In the aftermath the Pentagon lied about every aspect of the incident, later decorating the ship captain for his “exceptionally meritorious conduct.”

Moreover, the U.S. began its longstanding economic war against Iran in 1987, when the Reagan administration banned Iranian imports and limited U.S. exports. American penalties were strengthened over time. Most important, in 2011 Washington expanded its restrictions from just Americans to anyone on earth with financial connections to America. Since then U.S. officials have routinely sought to conscript the rest of the world to enforce their policy preferences.

Finally, Washington consciously followed a military policy which can only be seen as threatening in Tehran. For years the U.S. acted as chief armorer and defender of nuclear-armed Israel and majority-Sunni Saudi Arabia and United Arab Emirates, inveterate antagonists of Iran. Washington sold tens of billions of dollars in sophisticated weapons to the former two nations, exacerbating Shia-Sunni tensions and encouraging Riyadh and Abu Dhabi to follow more aggressive policies.

In 2003 the Bush administration invaded neighboring Iraq, with the intention of installing a pliant government and maintaining bases to be used for other military operations in the Gulf, including against Tehran. With the administration’s Neoconservative supporters pressing for war, Iran offered to negotiate all outstanding issues, including its nuclear program, only to be rebuffed by over-confident U.S. officials who expected more from another member of the “Axis of Evil.” Since 2011 Washington sought to overthrow the Assad government in Syria, arming and training various Shia insurgent groups. Even as Damascus consolidated control over once occupied territory the U.S. maintained illegal military deployments in Syria with the express purpose of expelling Iranian forces, which, in contrast to American troops, were in Syria legally at the express invitation of the recognized government.

There is much to dislike about the Tehran regime. It is repressive and aggressive. Its values and interests often conflict with those of America. Yet not always: the Islamic fount of terrorism has been Sunni, not Shia. The two governments opposed the Taliban in Afghanistan and Islamic State in Iraq and Syria. In any case, Washington long maintained relations and peace with the most odious of regimes, especially in the Middle East: Bahrain, Egypt, Saudi Arabia, and United Arab Emirates, to name just four. Nothing requires the current state of unremitting and often violent antagonism between Iran and America.

Alas, the president’s speech to the nation offered more of the same nationalistic nonsense, without context or nuance.

He began by insisting that “as long as I’m president of the United States, Iran will never be allowed to have a nuclear weapon.” Yet he did not stop Tehran from developing nukes. U.S. intelligence believes that the former abandoned its nuclear program in 2003, 14 years before Donald Trump took the oath of office.

Moreover, the JCPOA greatly reduced Iran’s enrichment capabilities while setting up an oversight regime which would alert the U.S. and others if Tehran chose to renew its weapons efforts. And Iran was in compliance with the JCPOA—until this administration abandoned the agreement, reimposed old sanctions, and concocted new ones. Iran is restarting its old nuclear efforts and positioning itself to restart a weapons program, if desired, because of the president’s irresponsible policy. Iran is closer to getting a nuclear weapon now than when Trump took office.

Next, the president celebrated the fact that there had been no American casualties from the retaliatory Iranian strike: Americans “should be extremely grateful and happy.” Of course, that is because Tehran apparently alerted U.S. officials as to the two targeted bases, allowing personnel to take cover. Iran wanted to demonstrate its capability to do harm, to deter future American attack, while halting the seeming rush toward war.

And Iran might not be finished in exacting revenge. Washington has unhelpfully established the precedent that military commanders and political decisionmakers are fair targets for assassination. America’s extensive regional deployments make U.S. forces vulnerable to seemingly anonymous and isolated incidents. A rocket fired here. A soldier captured there. Indeed, senior American officers and officials often travel in Iraq and elsewhere in the region. One could imagine incidents which leave Washington suspicious of Iranian involvement but hesitant to respond since there are plenty of factions and miscreants—such as a revived ISIS—capable of independently making criminal mischief.

Anyway, Tehran was shooting at an American base because the president initiated a new round of hostilities against Iran: economic sanctions are considered an act of war. The president was not just severing U.S. commercial ties with Iran; he was attempting to block Iran from dealing with willing buyers and sellers from abroad. One can imagine how Americans would respond to another country—imagine China or Russia—attempting to do the same to the U.S.

Moreover, even Secretary of State Mike Pompeo, whose relationship with the truth regarding Iran often has been lax at best, acknowledged that the alleged threats that supposedly justified assassinating Qasem Soleimani, top leader in Iran’s Islamic Revolutionary Guard Corps, only applied to Washington’s Middle Eastern deployments—all around Iran—not America’s homeland. Had the president followed through on his promise to withdraw Americans, or his predecessors been less aggressive in attempting to dominate the Mideast like every other region on earth, the U.S. would have had nothing to fear.