Don't Listen to the ‘China Covered Up the Coronavirus’ Narrative 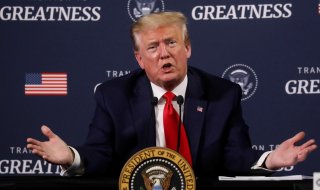 Since President Donald Trump’s early optimism that coronavirus was “under control” and “within a couple of days is going to be down to close to zero” has proven to be false hope, he has been trying to turn China into a scapegoat. He is attacking China and blaming them for the fact that America has 1.6 million confirmed cases of coronavirus and ninety-five thousand deaths, even though many of the reasons for the severe outbreak here have to do with mistakes by governors, government agencies, and Donald Trump himself.

China, for example, did not decide to continue to allow 140,000 travelers to fly into the U.S. from Italy, twice as many as the amount that came in from China, and 1.7 million from the rest of Europe, for weeks after Italy had become a hot spot, without so much as temperature checks or fourteen-day quarantines upon arrival.

China made some mistakes, as did every country, in responding to the coronavirus, but China’s overall response was more effective than most countries, with domestic quarantines of inter-city travelers, widespread mask-wearing, and a testing and tracing regime with access to a vast trove of data. And the claims of a “cover-up” are inaccurate. They are nothing but a cover for politicians and countries with antagonistic relationships towards China to defend themselves in front of their domestic publics and to pressure China internationally.

The claims of a “cover-up” are increasingly vague—Trump blamed “some wacko in China” on Twitter on May 20 but the claims typically rest on a few premises:

1.) the claim that China undercounted the number of cases and deaths

2.) the claim that China did not respond quickly enough

3.) the claim that China denied that the virus could spread between humans

4.) outrage over the detention of Dr. Li Wenliang and others

Arguments one through three are largely inaccurate, while point four is a valid criticism but not evidence of a cover-up and not relevant to the global spread of coronavirus. Overall, China’s critics are holding China to a higher degree of competence and transparency than they are holding democratic countries.

First, there is little evidence that China fabricated or intentionally undercounted deaths in most of the country, which is what a “cover-up” would describe. It is true that the official number of deaths in China, like every other country, almost certainly is missing some people who died at home or undiagnosed.

The New York Times reported in April that coronavirus cases across the country were not being counted because tests were lacking, and many likely coronavirus deaths in February and early March were attributed to the flu. Officials in California were able to confirm the deaths of coronavirus as early as February 6, three weeks before the first recorded death. Data on Florida’s coronavirus dashboard shows people reporting coronavirus-like symptoms as early as January 1. The manager who oversaw that data was fired after protesting an order to remove some of the data.

The dismissals of many officials who were propagating information their superiors did not want to be shared shows a commonality and difference between the political systems of the United States and China. Here, there have also been attempts to downplay or hide criticisms or negative information on the government’s response, but it is dealt with through firings, reassignments, and official rebukes. Dr. Rick Bright, for example, testified to the House of Representatives that he was removed from his position leading the team involved in creating a vaccine after warning about shortages of PPE and disagreeing with the administration’s promotion of hydroxychloroquine even for people who weren’t hospitalized.

Undercounting is taking place in Europe, too. In Madrid, over three thousand people had died in nursing homes without having been tested. The Economist reported in its April 18 issue, “France’s figures include deaths that occur in care homes—nearly half the total—white Britain’s do not.” Given what we know about how the elderly are most at risk and how nursing homes have become hotbeds everywhere, not counting deaths of their residents would have a significant impact and would be something a regime could do if it wanted to artificially limit its reported numbers.

The number of cases reported by different cities and regions in China shows a strong correlation with the amount of outbound travel from Wuhan to those regions, multiple papers have found. That would indicate that the numbers reported in each region were relatively accurate and not fabricated. If the numbers were fabricated, then there would not necessarily be expected to be any correlation between Wuhan migrants and cases reported. Because coronavirus originated in Wuhan, the regions with the highest number of migrants arriving from Wuhan had the highest numbers.

Details about the situation in Wuhan itself are probably the most hazy and would be the most likely to have been intentionally manipulated, both because local officials early on (and before knowing the severity) might have felt motivated to keep it from hurting their careers and because the most egregious mistakes would have happened in Wuhan.

Reportedly, the CIA has concluded that China undercounted its numbers, and photos of urns piling up in Wuhan were cited as evidence that many more had died in the central China city. While the CIA report has not been publicly released, the Bloomberg article reporting on it cites that, “The Chinese government has repeatedly revised its methodology for counting cases, for weeks excluding people without symptoms entirely, and only on Tuesday added more than 1,500 asymptomatic cases to its total,” which would not make China’s numbers terribly different from those of many other countries.

Icelandic data suggests that as many as half of people with coronavirus show no symptoms, which means that they would not be tested in most countries. The Catalonia region of Spain also revised its numbers upward, doubling them, in April. The Daily Beast reported on May 13 that the Trump administration is pressing the CDC to change its reporting methodology to exclude coronavirus deaths for which the victim was not tested.

A study by Timothy Russell, a research fellow at the London School of Hygiene and Tropical Medicine, found that China’s official numbers might have only documented one-third of all its coronavirus cases, but the same study found the UK, Italy, and Spain documented about 10 percent of their cases. Yet only China is being singled out with the “cover-up” label.

Ex-post facto, we know that coronavirus was spreading in Wuhan in December, and, as of March, the first known case was traced back to November 17. Now athletes on the French and Spanish teams have said they fell sick with what they think could have been coronavirus at the Military Games held in Wuhan in October. At the time, they thought it was the flu, indicating the difficulty of discerning a rare, unknown-at-the-time disease, which has symptoms similar to other diseases.

Doctors in Wuhan took note of the cluster of pneumonia cases in December but attributed it to an unknown cause as the coronavirus had not been discovered at that point. American doctors could not recognize that some of their patients had coronavirus in February and March, either.

“When I was working before we had testing, we had a ton of patients with pneumonia. I remember thinking it was weird. I’m sure some of those patients did have it. But no one knew back then,” Geraldine Ménard, chief of general internal medicine at Tulane Medical Center in New Orleans, said to the New York Times.

Dr. Li Wenliang messaged colleagues about the similarities to SARS on December 30. He was detained on January 3 and released the same day with a warning but no formal charges. Virus samples were shipped to Fudan University in Shanghai on January 5, and the results of the tests, that it was SARS-CoV2, or the coronavirus, were announced to the world on January 9.

So the detention of Li did not impact the speed of China’s response nor the global spread of the virus. It might well have put Li and his colleagues at greater risk of contracting coronavirus. There was a concerted effort by Wuhan government officials and hospital officials to deny that healthcare workers were getting sick and to even prevent doctors and nurses from wearing masks at some hospitals. Li was clearly a victim. The Chinese government did issue an apology and criticize the Wuhan Public Security Bureau. Whether the apology is sincere or meant to appease local and international anger is another matter. Either way, China’s actions to Li do not explain the spread of the virus or absolve the rest of the world for their failures.

The timeline of China’s response is all in Caixin Global’s article, the same article that has been cited by outlets such as The National Review to push the “cover-up” case. On January 3, according to Caixin Global, China’s National Health Commission “ordered labs to transfer any samples they had to designated testing institutions, or to destroy them.” The National Review’s Tobias Hoonhout describes this as a “gag order” (in January, not “late December). But the samples arrived at the facility two days later. Is taking one week to conduct the tests—as opposed to some hypothetical time frame in a different scenario—is a slow response?