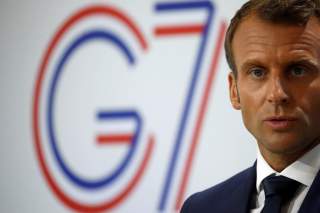 First, there was Macron the establishmentarian’s reaction to Trump’s ascension. In 2017, he thumped Marine Le Pen of the National Front to become France’s youngest leader since Napoleon; Le Pen had been tacitly supported by major White House allies, including the then-Chief Strategist Steve Bannon. Macron’s runaway victory was seen as vinegar on the acidic rise of populism internationally.

Second, there was Macron the Trump toady. Macron surprised observers in forging a tight relationship with Trump’s Washington. With the British on their backs with Brexit, and Trump’s relationship with Germany’s Angela Merkel intractable, the cunning Macron smelled opportunity. The duo’s wives hit it off; Melania Trump decades her husband’s junior, with Brigette Macron, decades her husband’s senior. They were 2017’s odd couple. Macron was granted the first state visit to Washington of the Trump era.

But third came the break. By spring 2018, the French president believed he could persuade the Jacksonian in the White House to stay in the Iran nuclear deal and staked significant political capital in attempting that outcome. He failed, and by summer, Trump had a new, more hawkish national security team, anchored by the deep Iran skeptics Mike Pompeo at the State Department and Ambassador John Bolton at the National Security Council.

But now, there is a fourth turning, and a chance at rapprochement. Trump’s militarist supporters are bristling at an apparent maneuver by Élysée Palace—effectively smuggling in the notorious Iranian foreign minister, Javad Zarif, to the sidelines of the G7 in Southwest France. There were no signs that Trump actually met with the diplomat, but for hawks, the damage is already done. Speaking at the final day of the summit, Trump said he is “not looking for leadership change” in Tehran, news to an administration on a de facto regime change footing.

Former Trump attorney Rudolph Giuliani told me last year, while caveating he did not speak for the administration, that America’s policy on Iran is essentially regime change. Anytime Trump signals otherwise, panic sets in throughout the president’s inner sanctum. Macron further doubled up with Trump over the weekend in signaling an openness to readmitting Russia to the group; Boris Johnson, “Britain’s Trump,” opposed.

“If the French did in fact invite Iranian Foreign Minister Zarif to the G7 without consulting the US, it would be a signal of great weakness to Iran and terribly disrespectful to President Trump,” South Carolina Senator Lindsey Graham said. “Hope President Trump maintains steady resolve against Iranian aggression.”

Further, some noted that something was amiss with Pompeo’s absence at the summit. “Why wasn’t Pompeo at the G7?” a former senior administration official asked of the Secretary of State. “Unreal: why no Pompeo?” Pompeo’s State Department, which has quietly warred with Bolton’s NSC, has nonetheless been the anchor of a steadily, more fierce Iran policy, from overseeing the nullification of the JCPOA, the Iran deal, to designating the most elite facet of the regime’s military a terrorist organization.

Foggy Bottom has hit stormy weather as of late, however, with the unceremonious sacking of policy planning director Kiron Skinner, among the most senior, black, female officials in government and the occupant of the seat once warmed by George Kennan. In her place, Pompeo has installed Peter Berkowitz, a figure in neoconservative circles, adding to the skepticism of Pompeo’s staffing choices on the Trumpist Right.

And now comes the news that Bolton could again be in trouble. In June, when the ambassador was sidelined in outer Mongolia, a senior administration official and Bolton ally conceded that Bolton had been put in time out by POTUS. Now, a person familiar with internal administration deliberations says Bolton’s departure will come in October.

Regardless, potential Bolton replacements are keen to defend Trump’s new course. “Despite enormous resistance inside the beltway to President Trump’s determination to forge a solution to the crisis in the Gulf, Trump emerges triumphant from the G-7 thanks to Macron’s assistance with Zarif’s timely appearance,” former Col. Douglas Macgregor, an NSC contender, told me.