Enforce the Monroe Doctrine on Russian Moves in Latin America 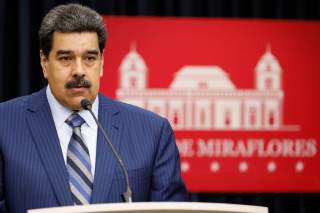 Russia and the United States seem determined to provoke each other by adopting highly intrusive policies in the opposing country’s geopolitical neighborhood. The latest incident is Moscow’s decision to send two nuclear-capable bombers to Venezuela to show support for Nicolas Maduro’s leftist regime. Russian defense minister Sergei Shoigu said during a meeting with his Venezuelan counterpart Vladimir Padrino Lopez that Russia would continue to send military aircraft and warships to visit Venezuela as part of continuing bilateral military cooperation.

Not surprisingly, Washington is unhappy about Moscow’s move. The Trump administration increasingly is concerned about the Maduro regime’s ugly authoritarianism, the meltdown of the Venezuelan economy and the massive refugee flow it has created, and the mounting tensions between Caracas and several neighbors, especially Colombia. Even before the latest episodes of turbulence, Barack Obama’s administration declared Venezuela to be a national security threat to the United States. The last thing U.S. officials want to see is Russia fishing in such troubled political waters.

Russia’s cooperation with Venezuela has grown markedly since tensions between Moscow and Washington flared in 2008 over Russia’s war with Georgia. A Russian general even spoke of the possibility of his country acquiring a military base in Venezuela. While civilian leaders in both Caracas and Moscow disavowed such intentions, Russian naval forces soon conducted joint maneuvers with Venezuelan units, and there was a proliferation of arms sales. In 2012, the Venezuelan government announced a $4 billion “loan” from Russia to purchase tanks, air-defense missiles, and other hardware. The bilateral political and security relationship has grown steadily closer since then.

There are multiple signs of greater Russian activism throughout Latin America over the past few years. Moscow has revitalized its political and military ties with Cuba’s communist government. After the dissolution of the Soviet Union, the new, non-communist Russia markedly reduced both its political and economic support to Havana. But Vladimir Putin’s government has reversed that policy, and Moscow is once again a major backer. In addition, the Kremlin is far more active in promoting ties with Brazil, Argentina and other major Latin American countries. And those initiatives are not confined to economics and diplomacy; they have a military dimension as well.

Washington’s failure to enforce the Monroe Doctrine during the Cold War when the Soviet Union made Cuba into a client state and military outpost has not encouraged respect for that doctrine in the post-Cold War era. The Trump administration needs to adopt a firmer policy toward Moscow’s intrusions into Latin America. At the same time, U.S. leaders must recognize that U.S. policy has been clumsy and provocative toward Russia’s interests in Eastern Europe, especially regarding Ukraine. Washington needs to adopt a new approach that respects Moscow’s implicit version of a Monroe Doctrine.

By pushing NATO expansion right to the borders of the Russian Federation, the United States needlessly antagonized a newly democratic Russia and eventually created a new cold war. The administrations of Bill Clinton and George W. Bush also trampled on Moscow’s long standing political and diplomatic interests in the Balkans by intervening militarily against Russia’s ally, Serbia. Worst of all, the Obama administration interfered egregiously in Ukraine’s internal affairs to help demonstrators oust the elected, pro-Russian government in 2014. That move constituted contempt not only for a Russian sphere of influence, but Moscow’s core security buffer. More recently, Washington has exacerbated already worrisome tensions with Russia by participating in NATO war games on Russia’s border, approving arms sales to Ukraine and flirting with constructing a permanent military base in eastern Poland.

A new policy is imperative. It must recognize that the United States and other major powers historically have insisted on a sphere of influence, indeed a sphere of preeminence, in regions adjacent to their homelands. Wise great powers respect those prerogatives and avoid taking actions that intrude into the spheres of influence of other great powers.

The geographic limits of such zones are frequently a matter of contention, but recent U.S. governments have gone much further and challenged the legitimacy of the entire concept. Two secretaries of state, Condoleezza Rice and John Kerry, openly rejected it in response to Russia’s military actions against Georgia and Ukraine. Rice termed the concept utterly “archaic.”

That is dangerously unrealistic thinking. Washington and Moscow need to establish clear rules of the road regarding conduct in Latin America and Eastern Europe. U.S. leaders should stress to Moscow that establishing or maintaining military ties with unfriendly regimes like those in Venezuela and Cuba creates unacceptable security headaches for the United States. If the Kremlin wishes to improve relations with Washington, it must cease such provocations and confine its hemispheric ties to normal diplomatic and economic relations. At the same time, Washington should inform Moscow that the days of trying to project U.S. power deep into Eastern Europe are over. The Trump administration then needs to abandon aspirations of adding Ukraine and Georgia to NATO, end arms sales to Kiev, and phase-out U.S. participation in NATO military exercises in such places as Poland, the Baltic republics, and the Black Sea. The other alliance members are unlikely to continue such provocative actions without U.S. involvement.

Such a modus vivendi means that the United States intends to remain preeminent in the Western Hemisphere, while Russia enjoys a similar status in a much smaller area in Eastern Europe. The alternative is a continued deterioration of bilateral relations, punctuated by ever-escalating provocations and quarrels. That is a dangerous course neither country should wish to pursue.