Ethiopia in Crisis: Will Secession or Civil War Erupt in the Horn of Africa? 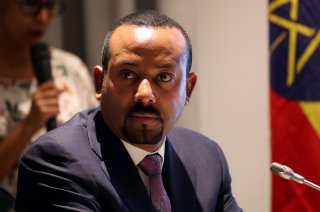 Ethiopia is at the crossroads, and the current ethnic divide in Ethiopia will eventually lead to the state’s dismemberment. If the current instability in Ethiopia prolongs, then, unfortunately, Ethiopia will suffer the same fate as Yugoslavia. The previous strongman of Ethiopia, Meles Zenawi, the architect of ethnic federalism, is long gone, but his enigmatic presence is dearly missed in Addis Ababa. Zenawi’s leadership was paramount for Ethiopia’s stability; Zenawi was for Ethiopia as Josip Broz Tito was for Yugoslavia. Therefore, where is Ethiopia heading: disintegration, or reform under Ethiopia’s new prime minister, Abiy Ahmed?

The largest ethnic group in Ethiopia, the Oromo people, have been marginalized, brutalized, and treated as second class citizens since Emperor Menelik’s times. Subsequent Ethiopian leaders such as Emperor Haile Selassie and the communist dictator Mengistu Haile Mariam kept undermining the Oromo people’s rights. The TLPF, Tigray People Liberation Front, assisted by their brother’s in arms the EPLF, Eritrean People Liberation Front, toppled Mengistu’s Communist regime in 1991. Since then, Ethiopia has been under the leadership of the EPRDF, Ethiopian People’s Revolutionary Democratic Front, for almost three decades.

The EPRDF introduced ethnic federalism and divided Ethiopia into nine ethnic regions. For three decades, the EPRDF regime, under the leadership of Meles Zenawi, ruled Ethiopia by an iron fist. The current political reforms being undertaken by the unelected prime minister, and Nobel prize winner, Abiy Ahmed, might galvanize different ethnic groups for secession. According to Article 39 of Ethiopia’s 1994 constitution introduced, states under the Ethiopian federalism umbrella have an equivocal right for self-determination and secession.

Since coming to power in 2018, Abiy Ahmed embarked on reforming Ethiopia’s political and economic structure with mixed records. He made peace with Eritrea, freed political prisoners and journalists, and curtailed corruption, but ethnic division and separatism, instability, and insecurity are overshadowing his reforms. Ethiopia has always been ethnically divided and was ruled by ethnic clans since its inception as a modern state. The current ethnic discontent will pave the road for the state’s dismemberment. Ethiopia has the second-largest population in Africa, after Nigeria, with 115 million people. Ethiopia is geographically located in one of the most volatile regions in the world, the Horn of Africa. If Ethiopia becomes the Yugoslavia of the Horn of Africa, it will radically change the Horn’s geopolitical and geoeconomic landscape.

The dismemberment of the EPRDF and the creation of a centralized unitary party, the Prosperity Party, the part of Abiy Ahmed’s administration, expedited the eventual ethnic civil war in Ethiopia. The dismemberment of the EPRDF political party and the deliberate and calculated witch hunt of previous EPRDF members from the Tigray region has caused irreparable damage between the Tigray region and Abiy’s administration. Ahmed does not hold a monopoly on violence in Ethiopia. Abiy’s administration postponed the Ethiopian national election due to the coronavirus pandemic, and the Tigray region defied the central government’s authority by administering an election in 2020.

The Tigray region will be the first to declare Article 39 of Ethiopia’s constitution if the current ethnic civil war derived from ethnic nationalism becomes a norm, which it has, and that will cause other regions to pursue the same agenda of secession. The Tigray region defiantly held a regional election violating the federal government’s mandate, and the Tigray Independence Party (TIP) was on the ballot even though the TPLF, the Tigray People Liberation Front, won the provincial parliamentary election. Currently, the TPLF regional party does not have political ambitions of declaring independence. Still, suppose the ethnic nationalist party TIP becomes the Tigray’s local dominant party. In that case, it could result in secession and the formation of a new African state. The creation of an independent Tigray existed since 1976 with the greater Tigray manifesto, but seceding and annexing Eritrean territories will prove impossible. Still, without annexing Eritrean coastal lines and antagonizing the Eritreans, an independent Tigray could become a reality.

The creation of Ethnic militias in Ethiopia are signs of discontent and ethnic hatred between the most influential ethnic groups in Ethiopia. These are clear warning signs that Ethiopia is heading towards an ethnic civil war, and Abiy’s administration brought uncertainty and insecurity, not security, stability, and public confidence in the second-most populous country in Africa.  Idealistic progressive political reforms of hope and change are windows of opportunities for Ethiopia’s fragmentation. Unfortunately, Abiy Ahmed opened so many doors with his naive reforms that he is culpable for Ethiopia’s current state. Abiy Ahmed will eventually be a benevolent dictator like his predecessors to keep the ethnic nationalism at bay and keep Ethiopia’s different regions from succeeding as Eritrea did in 1991.

Daniel Haile is a graduate student at Texas A&M University.