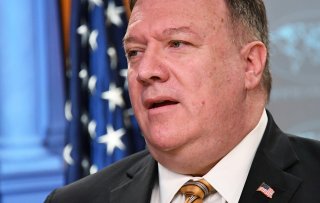 Secretary of State Mike Pompeo has been waiting for this moment for a long time.

The top U.S. diplomat began his term in office in May 2018 by pulling out of the JCPOA, a 2015 deal between Iran and six world powers over the Iranian nuclear program. And he is heading into Election Day with a move that could kill the deal on a global scale.

Pompeo has been hinting for months that the United States wants to restore United Nations sanctions on Iran. He formally set the process in motion last week, just in time for a biannual UN Security Council meeting on the JCPOA scheduled for June 30.

The video meeting followed a familiar pattern. The United States claimed that the JCPOA has failed to clamp down on Iran’s rogue activities. Iran and its allies accused the United States itself of being a rogue actor that tramples on international law. The European nations urged restraint on both sides, warning that any move to kill the JCPOA would be dangerous.

But it was the first time all three sides had a chance to duke it out directly.

If Pompeo was hoping to build an international consensus against Iran, the meeting was a disappointment. Many representatives at the meeting placed Iran and the United States on the same level, portraying both sides as threats to diplomacy.

Germany accused the Trump administration of violating international law, and even the United Nations’ own undersecretary-general criticized Pompeo’s decisions.

Pompeo focused his own comments on the UN arms embargo against Iran, which is set to expire in October, but could be extended if the Security Council snaps back sanctions. The United Nations confirmed earlier this month that Iranian weapons were used to attack Saudi oil facilities last year, and that someone in Iran has been illegally shipping weapons to war-torn Yemen.

The United Nations now has a chance to “stand for international peace and security, as the United Nations founders intended, or let the arms embargo on the Islamic Republic of Iran expire,” Pompeo said. “The regime doesn't moderate when we lift sanctions or weaken accountability. In fact, it does just the opposite.”

“If you fail to act, Iran will be free to purchase Russian-made fighter jets that can strike up to a three thousand kilometer radius, putting cities like Riyadh, New Delhi, Rome and Warsaw in Iranian crosshairs,” Pompeo claimed.

He was referring to Russia’s Su-30 fighter jet. Pompeo admitted on Twitter—but failed to mention in his UN speech—that the plane could only make it that far in a one-way flight.

He appealed to U.S. adversaries as well, claiming that Iran's threat to the oil industry harms "nations like Russia and China that rely on stable energy prices."

“The root cause of current crises is the U.S. withdrawal from the JCPOA and reimposition of its unilateral sanctions,” he said. “Iran has clarified the defensive nature of its missile program on numerous occasions.”

Neither was Russian envoy Vasiliy Nebenzya, who accused the United States of pursuing “regime change” through its “maximum suffocation” campaign against Iran.

“This is like putting a knee to one's neck,” he said, apparently referring to the death of African-American citizen George Floyd at the hands of police. “What we get at the end is uncontrollable escalation with lasting implications for the international community.”

Pompeo had logged off before Nebenzya began his speech.

But China and Russia were not the only countries to criticize U.S. actions.

European Union representative Olof Skoog questioned whether Pompeo even had a right to call for sanctions snapback, as the United States had already left the JCPOA.

“In May 2018 the US announced that it was ending its participation in the JCPOA. This announcement was confirmed in a presidential memorandum,” Skoog said. “Since then the US has not participated in any meetings or activities within the framework of the agreement.”

And he criticized Pompeo’s decision to re-impose sanctions on companies working to convert Iran’s nuclear reactors to civilian use last month.

“These projects, endorsed by Security Council Resolution 2231, serve the non-proliferation interests of all and provide the international community with assurances of the exclusively peaceful and safe nature of Iranian nuclear activities,” Skoog said.

UN Undersecretary-General Rosemary DiCarlo said the same thing: Pompeo’s new sanctions “have impeded the ability of Iran and other member states to fully implement” the JCPOA.

German representative Christoph Heusgen went as far as accusing both the United States and Iran of lawbreaking.

“It is very unfortunate that the United States left the JCPOA and by doing this, and leaving, actually violating international law,” the German diplomat said, but “when someone runs a red light, and is violating the law, it's no excuse for another driver to also run the red light.”

Britain, France, and Germany all praised the JCPOA as a masterstroke of diplomacy, emphasized the danger of nuclear weapons, blamed both sides for violating the deal, and said that U.S. concerns with Iran should be handled within the JCPOA.

The three countries had released a joint statement on June 19 claiming that U.S.-led snapback would be “incompatible with our current efforts to preserve the JCPOA.”

Iranian foreign minister Javad Zarif, after all, said that the arms embargo was “inseparable” from the JCPOA.

The Iranian diplomat had appeared at the end of the meeting in order to deliver Iran’s much-awaited response to Pompeo’s speech.

Zarif claimed that Europe’s failure to shield Iran from U.S. sanctions—or to rebuke the United States diplomatically—had forced Iran to ramp up its own nuclear program in retaliation.

And he accused the United States of “punishing states and private citizens for not violating” UN resolutions on Iran by enforcing its sanctions extraterritorially.

“The United States must fully compensate the Iranian people for all damages it has inflicted upon them,” Zarif said, as sanctions have “irreparably harmed [Iran’s] economy and standard of living.”