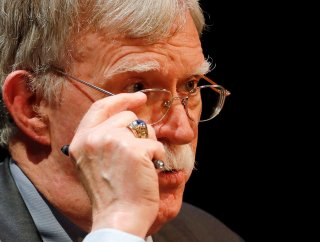 This is the scene Bolton sets in his book, The Room Where It Happened, which was obtained in advance by the National Interest.

The drama eventually ended with President Donald Trump pulling U.S. peacekeepers out of Syria—and then sending them back in. One hundred thousand Syrian civilians were displaced by an advancing Turkish army, and the Kurdish-led Syrian Democratic Forces turned to Russia for help. But U.S. forces never fully withdrew—they are still stuck in Syria defending oil wells.

Bolton’s account sheds light on how it happened: hawks in the administration, including Bolton himself, wanted U.S. forces in Syria fighting Russia and Iran. They saw the U.S.-Kurdish alliance against ISIS as a distraction—and let the Turkish-Kurdish conflict fester until it spiralled out of control.

Trump was ready to agree with Erdoğan in a December 14 phone call, and wanted U.S. forces to “get the hell out” of Syria.

Bolton was no fan of the Kurds—especially because the main Kurdish guerrilla group in Turkey was considered a terrorist organization—and believed that the “big picture was stopping Iran” in other parts of Syria.

But he feared that abandoning the Kurds would send their U.S.-trained soldiers into Iran’s arms and strain other allies’ trust in America.

“Why we were affiliated with one terrorist group in order to destroy another stemmed from [former President Barack] Obama’s failure to see Iran was a much more serious threat, now and in the future,” he wrote, “but what was not complicated was the strong U.S. sense of loyalty to Kurds who had fought with us against ISIS.”

Bolton often butted heads with then-Defense Secretary Jim Mattis, who “was focused on ISIS rather than Iran.” But both wanted U.S. forces to stay in northeast Syria.

Amb. James Jeffrey, the State Department’s point-man on Syria and the former U.S. Ambassador to Turkey, complicated things even more.

Bolton described Jeffrey’s allegedly pro-Turkish views as “a chronic State Department affliction where the foreign perspective becomes more important than that of the U.S,” and Pompeo openly told Bolton that Jeffrey “had no love lost for the Kurds.”

But the pendulum began to swing in the other direction, and U.S. forces stayed in Syria.

Trump decided that he wanted a more “orderly” withdrawal after realizing that “he was getting mauled by media coverage.”

“The Turkish military provided a potential lifeline in that regard,” Bolton wrote, because he believed that they could oversee an “orderly transfer of power” in northeast Syria.

Trump got on the phone with Erdoğan again, telling the Turkish president that he wanted Turkish forces in northeast Syria as long as they would “attack ISIS and not the Kurds.”

And U.S. military commanders convinced Trump that they just needed a few more weeks with the Kurds to defeat ISIS—or in Trump’s words, “knock the shit out of them on the way out.”

During a surprise Christmas visit to U.S. troops in Iraq, the President issued another conflicting directive: U.S. troops should have a “vicious withdrawal” from Syria, but stay in Iraq as a “lynchpin” against Iran.

Gen. Joseph Dunford, then Chairman of the Joint Chiefs of Staff, figured out a way to square the circle. He proposed an international “NATO-based monitoring force” watched by U.S. intelligence to keep the Turks and Kurds from fighting in Syria.

Dunford assessed that Turkish commanders “were looking for reasons they could use to avoid conducting military operations south of their border, while simultaneously saying they were protecting Turkey from terrorist attacks.”

And he thought that Gen. Mazloum Abdi, leader of the Kurdish-led Syrian Democratic Forces, had “quite limited” options and would want to “consider some insurance now.”

“Since Erdoğan's real priority was domestic politics, in my view, this arrangement might be enough,” Bolton wrote. “While we played this string out, or developed a better idea, which might take months, we had a good argument for maintaining U.S. forces [in northeast Syria].”

Pompeo also proposed bringing in Arab countries, who “had financial resources” and “no love for Turkey.”

Pompeo, Dunford, Bolton, and then-Defense Secretary Patrick Shanahan—Mattis had resigned in frustration—drafted a "statement of principles" setting down their red lines as they prepared to travel to Turkey for negotiations.

Jeffrey showed up with his own red lines: “a color-coded map showing which parts of northeastern Syria he proposed to allow Turkey to take over.”

He never got to show his map off, as Erdoğan cancelled his meeting with Trump’s cabinet.

In the meantime, Trump was beginning to come around to a multinational peacekeeping force in Syria. He told Erdoğan during his next phone call that the U.S. military would handle negotiations over their presence in Syria.

Sen. Lindsay Graham (R–S.C.) offered to help sell Erdoğan on the idea. For all of Graham’s public rancor towards Erdoğan, Bolton says that the Senator had “good relations” with Turkey’s leader.

Negotiations dragged on, and the United States and Turkey agreed on a “safe zone” in northeast Syria by August 2019. Kurdish forces pulled back 5 km from the border and destroyed their own fortifications, while U.S.-Turkish joint patrols filled in the gap.

Jeffrey told reporters around that time that U.S. officials “don’t see” the possibility of a “Turkish invasion.”

Graham’s office did not respond to a request for comment.