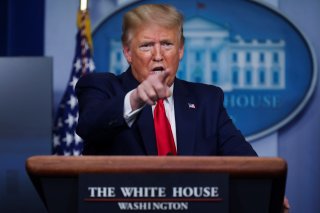 The Trump administration did not secure the freedom of an American imprisoned in Iran in exchange for releasing an Iranian scientist held on U.S. immigration charges, the National Interest has learned.

Sirous Asgari was deported to Iran on Tuesday after nearly three years in U.S. detention, first for sanctions-busting charges that were later dropped, and then for an expired visa. Iranian officials had raised the possibility of trading Asgari for Michael White, a U.S. Navy veteran imprisoned since 2018.

But the U.S. State Department denied that Asgari’s release on Tuesday was part of a deal to secure White’s freedom.

“The United States has tried to deport Sirous Asgari since December 2019, but the Iranian government repeatedly has held up the process,” State Department spokeswoman Morgan Ortagus told the National Interest. “As the Iranian Ministry of Foreign Affairs confirmed today, Mr. Asgari is not and has never been a participant in any prisoner swap with Iran.”

Iranian foreign ministry spokesman had told state-run media earlier in the day that “there is no truth to the rumors of Mr. Asgari’s exchange for another person.”

Asgari was arrested for allegedly violating U.S. economic sanctions on Iran while on a research trip to the United States in 2017. A judge threw out the charges in November 2019, but as Asgari’s visa had already expired, Immigration and Customs Enforcement detained the materials scientist immediately after.

U.S. immigration authorities was not able to deport Asgari until the Iranian government gave him a passport in February, and his deportation flight was then cancelled several times due to the coronavirus pandemic.

Iranian diplomat Abolfaz Mehrabadi had told the New York Times that the fates of White and Asgari were “entangled.”

White, a cancer survivor and U.S. Navy veteran, had been arrested and convicted of insulting Iranian leaders and sharing a “private photo” without permission. The U.S. government has long considered White to be “wrongfully detained.”

The Iranian government released White to the custody of the Swiss Embassy in Tehran, which also serves as a back-channel to the United States, as part of a mass prison furlough meant to stop the spread of coronavirus.

White and Asgari both eventually contracted coronavirus in detention.

But there was no indication that White was going to be released—and Asgari’s deportation without a deal closed one of the possible doors to his freedom.

“Reports in Lebanese media surrounding Michael’s case today are not accurate,” White’s family said in a Monday statement about rumors of a prisoner swap. “Please continue to pray for Michael’s release.”

While the World Fears Iran's Missiles, What About Its Army?