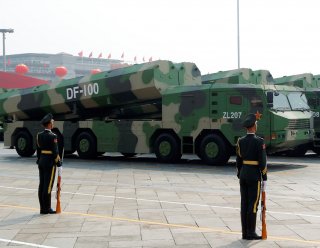 When the Trump administration announced Washington’s formal withdrawal from the 1987 Intermediate-Range Nuclear Forces Treaty nearly a year ago, Secretary of State Mike Pompeo cited Russia's violation of the accord as the reason for the decision. "Russia is solely responsible for the treaty’s demise,” Pompeo wrote in a statement at the time. "Dating back to at least the mid-2000s, Russia developed, produced, flight tested, and has now fielded multiple battalions of its noncompliant missile.” By deploying the 9M729 ground-launched, intermediate-range cruise missile, Moscow struck at the heart of a Cold War-era agreement that prevented U.S. and Russian deployments of land-based missiles between 500 and 5,500 kilometers.

However, there was another reason why the Trump administration removed itself from the INF Treaty: China.

In the decades since the INF was signed, Beijing made a concerted decision to increase the range, dynamism, and lethality of its own cruise and ballistic missile programs. China could get away with these missile defense projects because it was never a participant in the treaty, which of course meant that Beijing had the advantage of operating without constraints. The Asian power now possesses the largest stockpile of INF Treaty-class, land-based missiles in the world, with the most recent estimate at 2,200. The Missile Defense Project at the Center for Strategic and International Studies assesses that China has “the most active and diverse ballistic missile development programs in the world,” something the Pentagon has long taken notice of. And the U.S. is in a rush to establish parity with the Chinese in the Asia-Pacific.

A day after Pompeo’s statement, Defense Secretary Mark Esper expressed his intent to deploy medium and long-range land-based ballistic missiles in Asia as quickly as possible. It didn’t take long for the Pentagon to begin testing INF-class missiles either; the first test of a Tomahawk cruise missile launched from a ground-based platform took place on August 19, 2019, less than 3 weeks after Washington kissed the treaty goodbye. The Pentagon has spent preceding months trying to play catch-up with the People’s Liberation Army, with the development, testing, and deployment of land and air-launched anti-ship missiles taking priority. The objective: to send a message to the Chinese that they will not—and cannot—retain conventional missile superiority in the Pacific.

Unfortunately, there are several problems complicating Washington’s plans. The first and most immediate is access. Is there any U.S. ally or partner in Asia willing to host the kinds of missiles that will not only anger Beijing, but likely cause China to censure the host country through diplomatic demarcates, trade restrictions, and other forms of economic coercion? The answer thus far is “no.” Australia has demonstrated no interest in hosting INF-prohibited missiles on its territory. South Korea is not interested either—nor can Washington be confident that a post-Moon Jae in, conservative administration will be any more susceptible to U.S. overtures. The Philippines may have reversed the termination of its military training arrangement with the U.S., but stationing missiles that could threaten the Chinese mainland is in a class all to itself. Japan, Washington’s closest ally in the region, does not have any intention of ruining a relationship with Beijing that is slowly improving. And neither would be politically popular for any Japanese government to propose.

Then there is the issue of how China would react. For the U.S. to deploy long-range, land-based missiles in Asia is to set oneself on a slippery-slope, where an enhanced U.S. missile presence in the region forces the Chinese to accelerate their own programs in what the Institute for Strategic and International Studies calls an “action-reaction cycle.” Such a chain of events would be inherently escalatory, with the two largest economic powers and military spenders engaging in a staring-contest waiting for the other to blink. This clash-of-wills is not exactly a comforting scenario when one takes into account a U.S.-China relationship already scraping the bottom of the barrel. As the old U.S. military saying goes, “the enemy gets a vote.” U.S. officials can never be fully confident that China will respond to a U.S. missile build-up the way they would like.

One thing we can be sure of is that Beijing will not relinquish a ballistic missile program it has devoted decades of building and investing in. President Donald Trump’s fixation on a trilateral strategic arms control accord, where China eventually agrees to eliminate a large share of their nuclear weapons and missile delivery systems, is out of the question and will remain so regardless of how loud or insistent U.S. officials demand it. No Chinese leader would countenance entering into an INF-like treaty and eliminating 95% of China’s entire ballistic and cruise missile inventory, particularly when relations with the U.S. are in such terrible shape.

All of which begs the question: when will Washington smarten up, question its underlying assumptions about China’s behavior, and construct a policy in the Asia-Pacific within the bounds of reality?