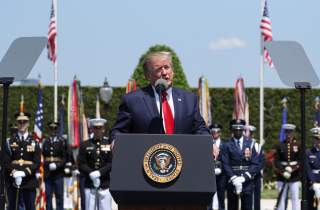 Part of that story is providence—a vacancy existed when the president was inaugurated, and another, the seat of Anthony Kennedy, opened up before a midterm election rebuke.

But the other part of that story is less luck, more blocking and tackling. For a generation, a concerted effort has been undertaken on the Right to reshape the American judiciary. The principal vehicle for this effort has been the Federalist Society. In the Trump era, the organization’s whip hand has been Leonard Leo. Leo shepherded Kavanaugh and Gorsuch, both FedSoc members, into power. This contingent’s project appears nearer to completion by the day: The Court seems poised to roll back generations-old overreach, namely Roe v. Wade, and worst case, serve as a countermajoritarian check on a nation drifting ever more leftward.

Ambitious foreign policy realists would like to replicate this model on their side of things. In fact, some have already started. The John Quincy Adams Society (JQAS) mimics FedSoc’s university chapter model, albeit on a transpartisan basis. As Leo subtly boxed Trump in—then-candidate Trump assented to a setlist of names for top judicial personnel—JQAS hopes to churn out a new generation of primacy-skeptic foreign policy professionals, including journalists. So, a generation hence, when a president runs and wins on bemoaning American misadventure abroad, she’ll have more than the usual suspects with which to fully staff an administration.

“I think we’re part of this growing wave of cross-partisan strategic restraint happening,” said John Allen Gay, the society’s national executive director. “We’ve got 60% higher attendance than last year and had to turn away dozens more students because we didn’t have room...best year ever for us, active on 44 campuses...thousands of students engaged by our programs...growing DC network.”

JQAS is part of a burgeoning “counter-elite,” says Gay, that will stand ready for service in administrations on either side of the aisle that want to shift decisively toward a more peaceful foreign policy.

I spoke at a conference put on by the group earlier this month on Capitol Hill. In the somnolent summer heat, indeed, students turned out by the scores. For all the vaunted “zoomer” cynicism, I saw an engaged new generation ready to join the foreign policy conversation. Not soon enough.

“It was great to be surrounded by so many like-minded realist thinkers, many of whom I see as being the future of foreign policy in Washington,” Jake Mercier, nineteen, of George Washington University told me. Mercier is spending his summer working for the presidential campaign of Democrat Tulsi Gabbard.

Lest you think the group is an echo chamber, I met one student who identified as “neoconservative.” It appears the movement is hobbling on in the twenty-first century, albeit incognito. The student cheered how “productive and informative” the gathering was: the opportunity to geek out over whether national security advisor John Bolton is properly defined as a nationalist uberhawk or a neocon only comes so often. Another student told me he was a Hillary Clinton supporter; I didn’t press him on the misguided endeavors in Iraq, Libya and Syria.

“I was heartened to see the huge turnout of college students coming to Washington to learn about realism … in our foreign policy,” said Stephen Wertheim, co-founder of the new Quincy Institute, which also takes the sixth president as its namesake. “I was impressed by how inquisitive and open-minded the students were. … They seemed particularly interested in the rise of China.”

JQAS “has built a strong network in a short period—evidence of the growing popularity of realism,” said Wertheim. Above all, the outfit serves as a necessary counterweight to those who would hijack the mantle of the moment. In the post-Bush, Trump-era politics, we are all realists now, after all.

Other college groups, like the Alexander Hamilton Society, champion the seemingly innocuous goal “strong and principled American leadership in global affairs.” It’s appropriate there’s an opponent in town to tighten the definition of U.S. national interest.