Fight Night: The Dem Debate Put a Spotlight on Impeachment 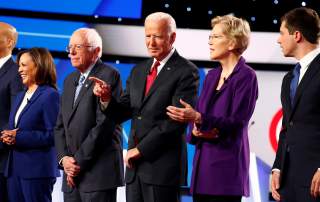 Last night was the sixth Democratic primary debate and the largest so far. Present were all ten candidates from the September debate, with the inclusion of Rep. Tulsi Gabbard (D-HI), returning after a hiatus, and billionaire hedge fund manager Tom Steyer, making his national debut.

The first debate since the initiation of the impeachment inquiry in the House, the first twenty minutes of the three-hour debate involved each candidate speaking on the topic. Every candidate on the stage has endorsed the impeachment of President Donald Trump.

“Sometimes there are issues that are bigger than politics, and I think that’s the case with this impeachment inquiry . . . impeachment is the way that we establish that this man [Trump] will not be permitted to break the law over and over without consequences,” said Sen. Elizabeth Warren (D-Mass.), who was one of the first candidates to endorse impeachment back in April after the release of the Mueller report.

“In my judge Trump is the most corrupt president in the history of this country,” said Sen. Bernie Sanders (D-VT), who listed abuses of the emolument’s clause along with the recent Ukraine controversy as reasons to impeach.

Former Vice President Joe Biden said that he agreed with Sanders that Donald Trump is the most corrupt president in American history and reiterated his belief in impeachment.

Saying that with this Ukraine business Trump has been “selling out our democracy,” Sen. Kamala Harris (D-CA) echoed her colleagues by calling Trump both the most corrupt and unpatriotic president in U.S. history, and said there is already enough public evidence to impeach.

The only candidate on stage to strike a different tone was Gabbard, who is the only person on stage with the ability to vote on impeachment. “Unfortunately, this [partisanship] is what we’ve already seen play out as calls for impeachment really began shortly after Trump won his election, and as unhappy as that may make us as Democrats, he won that election in 2016,” she said. Gabbard reiterated her support for the impeachment inquiry in a tone that suggested she wasn’t sold on the final impeachment vote.

The impeachment inquiry began after it became known that Trump asked Ukrainian president Volodymyr Zelensky to open an investigation into presidential candidate Joe Biden, who was vice president during the Obama administration, and his son, Hunter, who had business dealings in the country while his father was in office.

When Anderson Cooper asked Biden about the situation, the CNN anchor purposely carried water for the candidate. “Mr. Vice President, President Trump has falsely accused your son of doing something wrong while serving on a company board in Ukraine. I’ll point out there’s no evidence of wrongdoing by either one of you,” said Cooper said.

“My son did nothing wrong, I did nothing wrong,” repeated Biden to Cooper’s set up. Answering a follow-up, Biden said, “I did my job, I never discussed a single thing with my son about anything having to do with Ukraine, no one has indicated I have, we’ve always kept everything separate . . . so there’d be no potential conflict. My son made a judgement. I’m proud of the judgement he made. I’m proud of what he had to say.”

Sen. Cory Booker (D-NJ) took issue with Anderson Cooper’s softball to Biden. “We are literally using Donald Trump’s lies, and the second issue we cover on this stage is elevating a lie and attacking a statesman. That was so offensive. He should not have to defend himself,” said Booker.

The candidate with the most speaking time, and who endured the most attacks, was Warren. Multiple times she declined to say whether or not her Medicare for All plan would require higher taxes on the middle class, an evasion she was criticized for by Mayor Pete Buttigieg of South Bend, Indiana, and Sen. Amy Klobuchar (D-MN).

“The frontrunner torch has been passed from Joe Biden to Elizabeth Warren, at least in the minds (and probably the internal polling) of the other candidates. That’s why she took the most hits,” said James Antle, editor of The American Conservative. “Aside from her evasiveness on raising taxes, in stark contrast with Bernie Sanders, I am not sure the attempted attacks landed. Amy Klobuchar and Pete Buttigieg ably criticized her and brought up some valid general election concerns, but the key is whether those objections move Democratic primary voters.”

The foreign-policy section was dominated by the situation in northern Syria and the Turkish invasion of Kurdish lands. Joe Biden called Trump’s withdrawal of fifty U.S. soldiers from the Turkish-Syrian border “the most shameful thing that any president has done in modern history in terms of foreign policy.” The former vice president said he would reintroduce U.S. soldiers.

“The slaughter of the Kurds done by Turkey is yet another negative consequence of the regime change war that we’ve been waging in Syria. Donald Trump has the blood of the Kurds on his hands, but so do many of the politicians in our country from both parties who have supported this ongoing regime change war in Syria that started in 2011, along with many in the mainstream media who have been championing and cheerleading this regime change war,” said Gabbard, who went on to criticize the media’s portrayal of her as a “Russian asset” or “Assad apologist,” calling their behavior “completely despicable.”

“I think we ought to get out of the Middle East, I don’t think we should have troops in the Middle East, but we have to do it the right way, the smart way,” said Senator Warren, although her campaign clarified that she was only referring to Syria, not the region.

Sanders went so far as to say Turkey, a member of the NATO alliance, “is not a U.S. ally when they invade another country and engage in mass slaughter.”

The latter half of the conversation turned to Russian-American relations. “We must be unafraid in ensuring that we hold Russia accountable for invading the world’s greatest democracy,” said former congressman Beto O’Rourke. There are currently no reports of Russian soldiers invading U.S. territory.

Klobuchar denied that there was moral equivalency between U.S. and Russian interference in each other’s elections.

While attention during the night was focused on progressives Warren and Sanders, who immediately after the debate was endorsed by Rep. Alexandria Occasio-Cortez (D-NY), Doug Wead, political commentator and author of the forthcoming book Inside Trump’s White House, doesn’t believe Biden can be disregarded as the frontrunner just yet.

“On February 8, 1988, Vice President George H. W. Bush came in third place in the Iowa Caucus. His career was over and there were rumors that he would accept the presidency of the Purolator Company. The next week he won New Hampshire and he eventually won the presidency in November. That shows what name recognition and ‘comfort’ can mean in a turbulent election,” said Wead, who has worked on ten presidential campaigns. “Biden is ‘comfort food’ for the Democrat Party.”