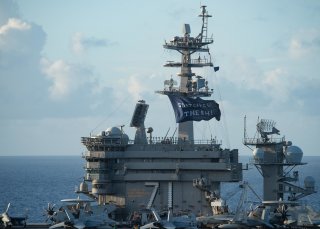 A former National Security Council member said that President Donald Trump will keep an “intense focus” on Iran as part of a strategy to keep China out of the Middle East.

The Trump administration has attempted to shift its focus to great power competitors like Russia and China under the National Security Strategy of 2017, a process that has only accelerated with the coronavirus pandemic. The shift in resources has raised questions about the future of the U.S. presence in the Middle East.

But Richard Goldberg, who oversaw Iranian nuclear affairs at the National Security Council from 2019 to 2020, claimed that Trump’s “maximum pressure” campaign against Iran will continue as part of a worldwide competition with China.

“Who is it that wants to take over Iran, make Iran their client state, get their foothold deeper into the Middle East strategically through Iran?” he said at a Monday conference call. “Russia and China.”

He added that pressuring Iran would also help “a potential Biden administration to reset the policy and to gain maximum leverage for its own engagement, potentially, with Iran next year.”

Goldberg now serves as a senior advisor for the Foundation for Defense of Democracies, which hosted the Monday call to discuss a United Nations report on Iranian nuclear activities.

Behnam Ben Taleblu, a senior fellow at the Foundation, suggested that confronting Iran could also serve as an example to Russia and China in the future.

“There is a regional element to great power competition,” he said. “Our adversaries watch how we deal with our other adversaries.”

Trump has pursued a campaign of “maximum pressure” aimed at forcing the Iranian government to change a host of domestic and foreign policies. The campaign has been focused on economic pressure, but also included a brief military skirmish in December 2019 and January 2020 when U.S. forces assassinated Iran’s Maj. Gen. Qassim Suleimani in Iraq.

Iran, however, has remained defiant, and has even ramping up its nuclear research past the limits set by a 2015 deal with six world powers. The United States was originally part of the deal, but left at the beginning of the maximum pressure campaign.

Goldberg said that the Trump administration’s “intense focus” will include both continuing maximum pressure and bringing Iran’s nuclear violations to the UN Security Council.

The Trump administration has been trying to activate the UN snapback mechanism, which would restore international sanctions on Iran that were lifted under the 2015 deal. Russia, China, and European countries have all rejected snapback in harsh terms, although the United States argues that it does not need any other country’s consent under the terms of the 2015 deal.

Goldberg claimed that last week’s UN report, which voiced “serious concern” about Iran’s lack of transparency, would put those European countries in a “contemplative mood.”

David Albright, founder of the Institute for Science and International Security, added that China would cooperate with the effort.

“China is typically not inclined to defend violators of international safeguards agreements. What you're really looking for is basically that China doesn't block anything,” Goldberg said. “You don't expect them to be a positive player, but you try to maneuver so it's just not blocking.”

This article originally attributed a quote by David Albright to Richard Goldberg.