The French Connection to Lebanon 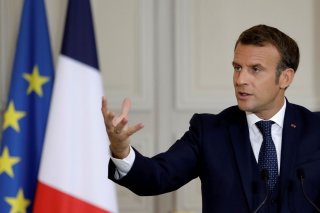 The Arm Spoke: With his one remaining arm he brings back to my embrace cities severed from my nation.

The Brain Spoke: Beirut shall once more be the capital of my thoughts, the harbor of my nation.”

These words were pronounced on September 1, 1920; gripping, life-giving words issuing from mangled anthropomorphic body parts as opening salvos of an epic poem of national salvation. Written one hundred years ago by Francophone Lebanese poet Charles Corm (1894–1963), The Hallowed Mountain had been a celebration of the day that Greater Lebanon—precursor to the modern crumbling Lebanese Republic—was brought back to life. Swelling with vernal enthusiasm and sprightly national energy, Corm could not have chosen more apt imageries, symbolisms, and historical references with which to introduce his national revival celebration; an ode to a resurrected Lebanon prefaced with an encomium to France, “the mother of all just liberties” as Corm described her, incarnated in the person of Gen. Henri Gouraud (1876–1946), the High Commissioner of the French Republic, the “famed maimed old [friend who had] come to make whole again [a] mutilated nation.”

Entrusted in 1920 with a League of Nations Mandate charged with building new states on the debris of a defunct defeated Ottoman Empire, Henri Gouraud was a decorated war hero and graduate of France’s venerable Collège Stanislas and the Saint-Cyr military academy. An amputee who had left much of the right side of his body on the battlegrounds of Gallipoli, Gouraud had been the first choice for High Commissioner that the Lebanese Delegation to the 1919 Paris Peace Conference, headed by Maronite Patriarch Elias Pierre Hoyek, had feverishly lobbied for. And so, Gouraud’s Republic of Greater Lebanon proclamation act of September 1, 1920, might have been more of a Lebanese-Maronite exercise than a French Colonial project. France was, after all, initially in favor of smaller “ethnic states” mimicking the former Ottoman Vilayets of Beirut, Damascus, and Aleppo, among which a largely Maronite Mount-Lebanon as an incarnation of an earlier Ottoman mutasarrifiyya (governorate) by the same name would emerge as a smaller autonomous entity, under French protection. But the Maronites—a minor people by all accounts—would all but force the hand of a “superpower,” impressing upon their French friends to put in place a Grand Liban, a “Greater Lebanon” entity that the Maronites themselves referred to at the Paris Peace Conference as “historic Lebanon, reflecting in its natural historic frontiers the ancient Phoenician homeland.”

It was with this precedent in mind that Gouraud would solemnly consent to the Maronites’ appeals. Addressing the “Greater Lebanese” (Grand Libanais) then present in Beirut on that auspicious September morning, Gouraud began his proclamation with a reminder to his audience that “the happy lustrous day is upon us, which the ancestors of the Greater Lebanese of today had for so long, and often in vain, yearned for.” And so he would declare in affective veneration the rebirth of “a single ancient nation, rooted in its past, eminent in its future, impavid like its subtle skillful eloquent Phoenician children, [rising] at the foot of majestic mountains [bathed in the holy waters of a] mythical Mediterranean that had once been witness to the fleets of Phoenicia, Greece and Rome.” A reborn Lebanese nation was a French debt of gratitude and a “confirmation of a great and old friendship,” stressed Gouraud; a token, as it were, of France’s recognition of the Lebanese people’s “aspirations, struggles, and triumphs,” and a French “salute to [Lebanon’s] grandeur and might.”

Historians with too many ideological axes to grind and too few historical nuances to heed could read Gouraud’s and France’s “gesture” as a nefarious colonial exercise. If so, it is strange that France (the “colonial power”) left Lebanon twenty-three years after its supposed act of “colonial fiat,” in 1943, without firing a single shot or imposing a single vestige of “colonial conceit.” And on this centennial anniversary of September 1, 1920, Lebanon teeters on the brink of dissolution.

On Tuesday, August 4, a massive explosion at least thirty times the size of the U.S. military’s MOAB rocked the Lebanese capital at the Beirut Port Authority. The jolts of the blast were felt as far afield as Cyprus and Jordan, and its physical toll counts to date more than two hundred dead, eight thousand injured and maimed, a major metropolis—the jewel of the Mediterranean—demolished, and over three hundred thousand Beirutis left homeless in urban neighborhoods that have sustained some fifteen billion dollars in property damage. Bruised, grief-stricken, disoriented, demoralized, hundreds of thousands of Lebanese took to the streets minutes after the blast embarking on the painful task of collecting the dead’s mutilated remains, digging up maimed survivors from underneath collapsed structures, tending to the wounded, cleaning up mounds of mangled iron and glass and concrete, and mending remnants of shattered lives. But in the same breath, and from behind the tears of sorrow and cries of anger, the Lebanese were also demanding accountability. Years of corruption, political cronyism, and governmental servitude to the international narco-terrorist group Hezbollah—a mercenary detachment of Iran’s Islamic Revolutionary Guard—had left Lebanon rudderless, in tatters, a servile colonial chattel ruled and fleeced by Iranian proxies in classic colonialist fashion.

The Lebanese also demanded an international investigation to uncover the causes of a blast they are convinced had its origins in a highly explosive Hezbollah arms stockpile secretly stored in the heart of Lebanon’s largest most populous metropolis. But the Beirut Port Authority, like all of Lebanon’s ports of entry and border crossings, is controlled by Hezbollah, and Lebanon’s ruling elites are in voluntary servitude to the Hezbollah criminal racket. The calls for an international investigation were rejected out of hand by the Lebanese government, led by President Michel Aoun, an aging, bumbling Hezbollah epigone who is in no position to expose his Iranian paymasters to international scrutiny. And so, a “brioche moment” plucked out of the pages of Marie Antoinette’s guide to the French Revolution might have been in the works for Lebanon: a replay of a criminal ruling mafia’s apathy and disdain for a people’s sorrows, which elsewhere in world history had led to the erection of guillotines and gallows.

In Lebanon’s case, guillotines and gallows may indeed still follow—although one month after the blast, the outpouring of anger and grief and calls for accountability that emanated from the initial trauma seem to be subsiding. The Lebanese are by now accustomed to tragedy, often opting for the immediacy of their proverbial hedonistic joie de vivre as a coping mechanism, rather than waiting for deliberate slow-paced days of reckoning. However, there are a significant number of Lebanese who do not subscribe to the Hezbollah edicts of modern Lebanese history and are at their wits’ ends at their nation’s predicament. Bruised and broken and yet to be defeated, the Lebanese received French president Emmanuel Macron (who visited in a show of support two days following the blast) with jubilation and cries of relief that “Lebanon had finally a president.” Two days after “Armageddon,” the acclaim given the visiting French president had implicitly been an indictment of the Lebanese president, a geriatric, mentally idle quisling whose apathy could not have replicated his French counterpart’s vernal energy, nor imitated the foreigner’s ardent sincerity. And so, not only was le tout Beyrouth acclaiming Macron on August 6, but it was also “welcoming back and confirm[ing] a great and old friendship,” to use the phrase of Macron’s forebear Henri Gouraud one hundred years earlier. Indeed, there were Lebanese voices crying out for the reinstatement of the French Mandate, asking that Lebanon be placed once more under “French protection” securing its wellbeing with international guarantees that would remove the specter of Hezbollah’s police state and bring the country back into the fold of “civilized nations.”

Noblesse oblige, and not devoid of a Frenchman’s sense of history (and responsibility), Macron repeatedly smiled at the prospect of a “return to the Mandate,” at every turn. But he also assured his desperate Beiruti fans that he was submitting a muscular proposal for a “new national contract” to the Lebanese authorities and that he “will be returning to Beirut on September 1, to face the people’s reckoning.” This promise and the symbolism of its date—even if perhaps only a public relations ploy at the time—was not lost on those Lebanese grasping at straws, craving a French deus ex machina, a return of General Gouraud’s geste du semeur. The symbolism also triggered the ire of resentful post-colonialist gauche caviar leftists, who went apoplectic reading in Macron’s promise of a revival of French imperial hubris. But a brief history lesson with a nuanced attention to the political taxonomy of France’s historic “mission” to the Levant might spare the clueless the strains of misplaced righteous indignation.

France’s presence in the East had for close to a millennium has been part and parcel of a “moral/spiritual” mission, never a “colonial/imperial” enterprise in the classic sense. Intellectual honesty and historical literacy might go a long way in this regard. To begin with, the 1920-1943 so-called “French Mandate” was not “French” at all, but a “League of Nations Mandate” entrusted to France. In that sense, France was answerable to the League of Nations (as well as France’s own moral/emotive instincts), not baser imperial projects. Sophomoric post-colonialist neuroses about “western imperialistic rapacity” may be allayed by considering the distinction between a “mandate” and a flat out “colonial” exercise. Any online dictionary may be an adequate source to become acquainted with the meanings of those terms, their etymologies, and their historical significance. Likewise, the example of Algeria that some self-righteous “woke” leftists have brandished to establish the evils of French colonialism does not match the case of Lebanon. Lebanon was never a French colony; France never had a colonial policy vis-à-vis Lebanon; and indeed France never had a “policy” vis-à-vis Lebanon, period. The French Archives of the Ministry of Foreign Relations (at the Quai d’Orsay in Paris, in Colmar, and in Nantes) reveal as much. Moreover, the British Foreign Office archives, the French “archives de l’armée,” and the family archives of General Henri Gouraud himself, shed much light on this fact, which continues to be distorted by bitter, belligerent, historically illiterate demagogic hacks. For the sake of intellectual decency and reasoned dialogue, this ought to stop.