Give Trump a Chance on North Korea 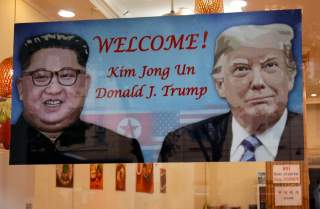 With every passing day that ticks off the calendar, the world is that much closer to a summit in Hanoi, Vietnam that could determine whether the eight months of diplomacy between the United States and North Korea have a shot at success.

If the first Donald Trump-Kim Jong-un meeting in Singapore last June was an attempt to break the ice and establish a personal relationship, this week’s sequel in Vietnam will be an opportunity for both men to use their new ties to accomplish something magical: a peace regime on the Korean Peninsula and North Korea’s denuclearization.

That’s the optimistic version. The pessimistic - and far more popular - version of the story is that the Hanoi summit will be a complete waste of time, full of meaningless photo-ops, empty gestures, and rosy talk with no actual substance attached. Washington, DC, a town chock full of North Korea hawks from institutions on the left and right, are almost assuming failure.

The conventional wisdom goes something like this: Kim Jong-un is nothing more than a technologically-literate iteration of his father and grandfather. He is crafty and manipulative and has decided to use the allure of diplomacy over the past 12 months as a tool to soften Washington’s demands for complete, immediate, and verified denuclearization without actually having any intention of giving up those capabilities. Trump, eager to sell a foreign policy success in order to distract from his legal and political problems back home, will be played like a fiddle when he sits down with the North Korean leader. And the Vietnam summit, like the one in Singapore, will be all optics and no deliverables.

Even Trump’s own national security aides are doubting the president’s ability to negotiate. National Security Adviser John Bolton has never been supportive of talks with the North Koreans and views any concessions from the United States as Neville Chamberlain-like appeasement. Secretary of State Mike Pompeo, who has met with senior North Korean officials in Pyongyang, Washington, and New York for close to a year, is reportedly worried that his boss will get outplayed and “outmaneuvered” by Kim. The U.S. intelligence community, trained to be skeptical and cautious on any issue touching North Korea, doesn’t see a whole lot of evidence that Pyongyang is interested in dealing. As Director of National Intelligence Dan Coats testified publicly to the Senate Intelligence Committee last month, “we currently assess that North Korea will seek to retain its WMD capabilities and is unlikely to completely give up its nuclear weapons and production capabilities because its leaders ultimately view nuclear weapons as critical to regime survival.”

The decks are stacked against success, a byproduct of twenty-five years of one-and-off diplomacy with Pyongyang that doesn’t seem to produce much beyond frayed nerves and bad feelings.

Some of the conventional wisdom is accurate. The abiding pessimism meandering over Washington is not necessarily wrong. This is, after all, North Korea. Nothing will be smooth. There will be very hard bargaining at the table and some screaming matches between U.S. and North Korean negotiators. It’s highly likely that some negotiating sessions will be cancelled in the heat of the moment or if positions become irreconcilable. The Kim regime will demand respect and reciprocity at every step in this process. If Washington starts dictating to the North Koreans or demanding concessions up front in order to prove their sincerity, the North Koreans will become upset and start upping the ante with their own. As former U.S. negotiator and senior State Department intelligence official Robert Carlin has observed, “[p]reconditions are, to the North Koreans, a way of bullying them, of seeming to put them on a leash even before negotiations begin.” The only precondition Pyongyang will accept is that there will be no preconditions, period.

But President Trump and his special envoy, Stephen Biegun, deserve the time and space to negotiate with this most hardened of U.S. adversaries. Those expecting major nuclear concessions from the North or for this entire process to reach a successful conclusion after only a few high-level meetings are either operating in their own universe or are deliberately hoping for diplomacy to fail. It could very well be that Hanoi is a dud, the denuclearization train has left the station, and the peace declaration everyone is talking about is shelved for a later date. Lord knows previous negotiations with the Kim regime have died slow and painful deaths.

And yet despite the history, there is also a chance the summit will produce forward momentum for more white-knuckled discussions in the future. For all his faults, Donald Trump is eager to be the U.S. president who officially ends the Korean War and introduces a stable peace regime on the Korean Peninsula. Whereas his predecessors put space between themselves and the North Koreans during past negotiations, Trump has chosen to dive into it. The president is personally invested in this process, which suggests he is that much more invested in a successful conclusion.

There will be carping from the sidelines about whether Trump is too willing to make a deal with Kim. Those in Washington who are unable to break through the glass case of conventionality and are used to nothing but policy failure over the last quarter-century will be unhappy regardless of what Trump pockets.

But for the first time since former Secretary of State Madeleine Albright jetted to Pyongyang to meet Kim Jong-il 18 years ago, there is a chance - however slim - for the United States and North Korea to establish a relationship that is categorized as something other than hostile and adversarial. We should give the administration the freedom to prove many of us wrong.