Hanoi Summit: Trump Hit a Bump On a Long Road 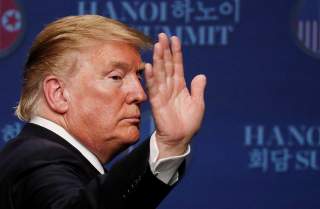 To the surprise of almost everyone, the Hanoi summit between President Donald Trump and Chairman Kim Jong-un ended without an agreement. But the president noted that he made a friendly exit, not “an angry walk-out.” This was something often lost amid the hype surrounding the purported Trump-Kim lovefest: reversing seven decades of hostility inevitably will take time.

The major problem appeared to be the amount of preparatory negotiation done prior to the trip—there was too little of it. The sticking point, according to Trump, was that the North Koreans wanted sanctions lifted in exchange for dismantling part of their nuclear facilities, apparently the Yongbyon Nuclear Scientific Research Center. The administration wanted more; it took aim at facilities that the North Koreans possibly believed the United States didn’t know about. Upon this rock, it seems, the summit finale foundered. Such issues should have been hashed out by the respective governments before the two principals met.

Rather than wring their collective hands, officials in both capitals should step back and create a step-by-step process of engagement, confidence-building, disarmament, and ultimately denuclearization. Every advance should benefit both sides. And even if the progression ultimately breaks down in the sense that the United States and Democratic People’s Republic of Korea can’t agree on complete verifiable irreversible denuclearization, which has long been Washington’s ultimate desire, the Korean Peninsula nevertheless will be more stable and peaceful, with the North largely integrated in the international system and playing a responsible, predictable role.

Moving forward requires that the president’s optimism be tempered by a large dose of realism. A nuclear-free Northeast Asia is unlikely. More important, however, a peaceful Northeast Asia is possible, even probable. And that would be an achievement worth celebrating.

– The Korean “problem” is seven decades old. In that time the peninsula has suffered through a deadly hot war followed by years of brutal cold war punctuated by brilliant hot flashes. DPRK leaders have buried Washington with obloquy, insults, slander and hatred. Although the West’s rhetoric was more restrained, its sentiments were similar. Closing the divide between North Korea and America will take more than a year or two. Most important, the two governments have begun a process that could yield genuine peace and cooperation. As the president apparently came to realize, what’s the rush? Hurrying won’t help.

– North Korean nuclear weapons do not threaten America. The North’s leaders are not—and never have been—suicidal. They want their virgins in this world, not in the next, and are not contemplating the virtues of exiting life in a giant radioactive funeral pyre in Pyongyang. The North’s program is primarily defensive, designed to create a deterrent against the United States, which has allied with South Korea, deployed troops in the South, and engaged in regime change against weak adversaries around the globe. There always is a danger of mistake and misjudgment, but Kim is not going to start a war that he knows would leave his nation in ruins.

– The seeming crisis of 2017 was created by the president. Kim had accelerated the North’s missile and nuclear tests, perhaps to solidify military support for his rule, rush through a window of vulnerability when Washington might consider striking militarily, or both. However, his rhetoric was nothing new, mimicking that of his father. The president’s reaction created the volatile environment, since Kim might be tempted to strike if the latter believed a U.S. attack was imminent. Under such circumstances the North’s military would essentially use it or lose it. Thankfully, neither leader displays any desire to experience the Second Korean War.

– Secretary of State Mike Pompeo said the governments had made “real progress” and moved “closer” to an agreement. That might be applying lipstick to a summit pig, but probably not. Most important, the two sides were talking specifics, which seemed almost entirely absent from the Singapore meeting. That suggests an obvious agenda for the future—most appropriately below the president-chairman level. Indeed, the likelihood of another Trump-Kim summit is not important. Summit breakdowns do not necessarily predict the future course of relations. Remember the 1986 Reagan-Gorbachev “failure” at Reykjavik? The meeting was followed by liberalization of the Soviet Union and end of not only the Cold War, but communism as a serious ruling ideology.

– Washington and Pyongyang should notch up a quick victory to reassure South Koreans, in particular, that diplomacy remains on course. The two governments should agree to permanent cessation of missile and nuclear testing by the North and military exercises by the United States. That would be more than a fair trade; in fact, it would be to America’s obvious advantage. Equally important, this step would demonstrate that negotiations continue and suggest that further progress is likely.

– The next task is to focus on bite-size moves designed to improve bilateral and regional relationships, reduce accumulated tensions, and meet goals of both the United States and North Korea. Solving everything—eliminating nukes and sanctions, in particular—in one agreement is an attractive but unrealizable objective. Indeed, Pyongyang already indicated its need for assurances before it abandons its leverage. Last year’s summit statement promised improved relations and the creation of a peninsula peace regime alongside—and in the DPRK’s view, before—denuclearization. Such steps need to be taken to make nuclear disarmament even possible.

– The Trump administration should treat such steps as benefits, not concessions. For instance, a peace declaration recognizes reality, that the war is over. This fits the president’s rhetoric. He lauded his relationship with Kim and predicted progress to come. Such an announcement would make it more difficult for the North Koreans to restart their militaristic anti-American propaganda. Liaison offices should be a no-brainer. Talks should be ongoing and expanding. Included in that should be an expectation that human rights will be one of the subjects addressed. The Cold War would have been much more fearsome had Moscow and Washington lacked a regular and direct communication channel. The president should lift the ban on Americans visiting the DPRK and North Koreans visiting the United States. These policies communicate hostility and closes off one means of influencing the North Korean people as well as government.

– While the administration should continue to pursue denuclearization, officials should not allow the perfect to become the enemy of the good. Washington can live with a nuclear North Korea: deterrence works. Even a nuclear-DPRK would be far less dangerous if it stopped conducting missile and nuclear tests, capped its nuclear arsenal, dismantled its nuclear reprocessing and production facilities, agreed to international inspections, reduced conventional threats against the South, improved relationships with its neighbors, and became more deeply embedded within the international system. The administration should set these as intermediate objectives along the hoped-for journey to CVID.

– Washington should further involve Pyongyang’s neighbors, who have much more at stake than America. The administration should press for sanction changes to allow inter-Korean projects to move forward. For the South, reconciliation is an existential issue; improving relations is about survival. The United States should allow that government greater flexibility. Washington also needs to assure China that its economic and geopolitical interests will be respected. Beijing does not want to see a reunited Korea allied with American hosting U.S. troops turned into a weapon of containment by Washington. The administration should indicate its interest in reaching a modus vivendi with Russia, including winning Moscow’s support in negotiations with the DPRK.

Ironically, the Trump walk-out might make it easier for him to sell a future agreement. He was under fire from Neoconservatives and uber-hawks who were horrified that he was engaging rather than bombing the North. Equally critical, but more cynical, were liberal Democrats who seem to find political gain in attacking the president, even when he is acting on what once were their principles. By demonstrating his willingness to walk away, President Trump will be less vulnerable to the charge of being “played.” Any deal he makes will look like it derived from a position of strength.

It would have been better had President Trump and Chairman Kim been able to strike an agreement in Hanoi. However, that failure should not obscure the fact that the situation in Northeast Asia today is far better than when the president took office. The meeting’s premature end is a nominal set-back that nevertheless highlights the more important point that the two sides are talking with rather than threatening each other. Both sides have an obligation to find a way forward.

Doug Bandow is a senior fellow at the Cato Institute. He is a former special assistant to President Ronald Reagan, author of Tripwire: Korea and U.S. Foreign Policy in a Changed World and coauthor of The Korean Conundrum: America’s Trouble Relations with North and South Korea.