Has the State Department Been Stripped of Its Swagger? 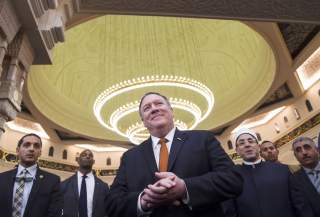 Albania. Brazil. Egypt. Honduras. Jordan. Egypt. Saudi Arabia. What do these diverse countries, separated by culture, geography, and politics, have in common?

Well, there is one thing: neither of them has a confirmed U.S. ambassador residing in their capitals. Two years into the Trump administration, dozens of ambassadorships remain vacant, with U.S. embassies doing business without a boss in the office.

And it’s not just ambassadorships. Back in Washington, the State Department’s top leadership ranks are riddled with empty offices. There is no chief financial officer. The undersecretary for democracy and human rights is operating without a Senate-confirmed nominee. The undersecretary for management, the person in charge of making sure the trains at Foggy Bottom run on time, is MIA. According to a running tally from the Washington Post, sixty-seven of the State Department’s 197 confirmed positions are without permanent officials, an astounding 34 percent.

Upon entering the department’s front door, Secretary of State Mike Pompeo promised to bring the “swagger” back to America’s diplomatic corps. Yet by the looks of the rolls, U.S. foreign policy is still being shortchanged by staffing problems, confusion among America’s allies and partners about who speaks for the president, and a general malaise among American diplomats about whether the State Department under Pompeo’s leadership is given a prominent seat at the table.

To be fair, the administration is not solely responsible for the plethora of vacancies. Because ambassadors and top leadership positions at Foggy Bottom require Senate confirmation, getting nominees approved can be as painful as a root canal. Individual senators have the power to block a nomination over any number of issues—some of which can be unrelated to the nominee. Confirmations have gotten increasingly politicized, another front line in the daily hell of Washington. A single senator, for whatever reason, can bottle up a nominee by registering an objection and forcing the Senate to go through the time-consuming process of breaking a potential filibuster. In many cases, the nomination simply dies in committee, forcing the administration to start all over again. This can be excruciating for State Department employees; in November 2018, Pompeo released a public statement blasting Senate Democrats (and Foreign Relations Committee ranking member Robert Menendez in particular) for “using our [the administration’s] nominees as a political football.”

Yet whether it’s bureaucracy in the executive branch or parliamentary tactics in the Senate, the result is the same: a void in U.S. diplomatic leadership in countries where Washington has an interest in nurturing relationships, protecting the rights of Americans overseas, and addressing any gaffes or problems that may occur.

Being a U.S. ambassador sounds like a plumb assignment, the perks of diplomatic immunity, endless cocktail receptions, hobnobbing, and black-tie dinners. Ambassadors in many cases are there to make appearances and remind the host nation that the United States is open for business. Often, an American ambassador is like the financier of an inventor pitching his product to an investor, the link between American corporations seeking to expand into new markets and a foreign government searching for the best possible business deal.

But it’s during a time of crisis when ambassadors are most useful. When Saudi Arabia and Turkey were engaging in a public war-of-words over the murder of Washington Post columnist Jamal Khashoggi, it was Pompeo who thrust himself in the middle by flying to the region to serve as a kind of therapist between two American partners. Normally that would be the ambassador’s job, but with no ambassador in either Riyadh or Ankara at the time, Pompeo had to clear his schedule. As retired U.S. ambassador to the UAE Barbara Leaf told Los Angeles Times columnist Doyle McManus last November, Washington would likely have been able to better manage the tensions over Khashoggi’s assassination if the United States had a full roster in place. “Had we had an ambassador in Riyadh, it’s not clear we could have avoided all this [crisis over the Khashoggi murder], but we might have had more advance warning,” Leaf said. “An embassy is your canary in the mine shaft. You want to be informed so you aren’t always caught by surprise.”

The State Department has tried to reconcile the staffing problem with an influx of special envoys. Zalmay Khalilzad, a former U.S. Ambassador to Afghanistan, Iraq, and the United Nations, was tapped by Pompeo to lead peace talks with the Taliban; former National Security Council official Stephen Biegun was asked to handle talks with North Korea; former U.S. Ambassador to Turkey James Jeffrey is President Donald Trump’s Syria envoy; and until he resigned this month, retired Central Command commander Gen. Anthony Zinni was in the Persian Gulf working to resolve the nineteenth-month-long Saudi and UAE-led boycott of Qatar. Special envoys carry the personal authority of the president, an attribute that can be highly instrumental when dealing with prickly parties.

That status used to be held by ambassadors, the oldest and most distinguished position in the business of diplomacy. The men and women who serve in this rank are the public representatives of U.S. foreign policy. Thanks in part to administration incompetence and congressional stonewalling, the nation’s foreign policy is now run by nameless, faceless bureaucrats or temporary foreign service officers.

Daniel R. DePetris is a regular contributor for the National Interest and a columnist at the Washington Examiner .