Have the Palestinians Become a “Footnote” In the Middle East? 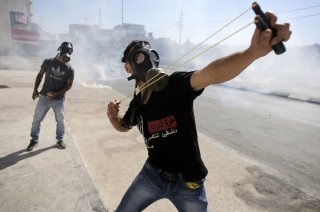 The new Israeli-Emirati deal is a gamechanger. Or it’s a nothingburger.

Israel and the United Arab Emirates announced last week that they would establish diplomatic relations, making the UAE the third Arab state in history to do so. The deal was a rare victory for President Donald Trump, whose previous Israeli-Palestinian peace plan was rejected by the Palestinians and met with a cold shoulder from Arab states.

But the agreement long predates the Trump administration. Israel and the UAE have been cooperating quietly for years, prompting some observers to note that their open marriage is no big deal.

And the announcement did not bring any new movement on the Israeli-Palestinian peace process, although it seemed to rule out Israeli annexation of the Palestinian territories in the short term.

Kaye, now director of the Center for Middle East Public Policy at the RAND Corporation, is the author of Beyond the Handshake: Multilateral Cooperation in the Arab-Israeli Peace Process and several other books about difficult diplomacy in the Middle East.

Below is a transcript of the conversation, lightly edited for clarity.

Matthew Petti: There’s a million things to say, but I’m curious to hear what your first reaction is.

Dalia Dassa Kaye: In terms of the big picture, I don’t think it’s terribly surprising. It’s been an open secret for a number of years that Israeli ties with Gulf states, especially with countries like the UAE, have been warming.

If it does become fully public, and this does emerge into a full peace agreement, treaty, normalization, exchanges of ambassadors, et cetera, then this is a significant development.

But at the end of the day, it really isn’t a peace agreement, or won’t really be a gamechanger in the region, because ultimately the core conflict in the region is the Israeli conflict with the Palestinians.

My big takeaway is: good news—certainly, normalization is a good thing—but I don’t see this as a gamechanger in terms of regional peace and stability.

Matthew Petti: This has very much been spun as, “this is all about Iran,” but I get the sense that there are some deeper shared interests than Iran, and I’m curious whether you agree with that assessment.

Dalia Dassa Kaye: I think we should be careful not to get into the trap of everything always being about Iran.

Iran could be a factor. There’s no question that concerns about Iran are a common denominator among Israel and the UAE, and Israel and other Arab neighbors.

But I think, in this case, many other factors were likely at play.

Probably the most significant drivers are calculations about the UAE’s relationship with Washington.

It’s clear this is something the Trump administration very much favored, had been pushing for a long time to normalize ties between Israel and the broader Arab world, and to show that the Palestinians would be forced to come to the table, that you didn’t need to get an Israeli-Palestinian peace first, you could do the outside-in approach.

For them, steps like this vindicate that approach, in their view.

This is a way of the Emirates basically formalizing something they were doing anyway, and at the same time, getting bonus points in Washington.

It will be bonus points not just with the Trump administration. Any administration coming in is certainly going to view normalization with Israel as a positive in terms of its own relationship with that country because it’s viewed as a good thing for Israel’s neighbors to be doing.

I don’t have an answer to why now, but clearly this is not just about Iran.

I don’t think we should look at this as the Emirates jumping into the pro-U.S. and Israel camp to counter Iran. They have more complex calculations in terms of how they manage their regional relations.

Matthew Petti: Turkey is a very underestimated player in this because it seems like the UAE and Israel both see the Turkey-Qatar-Islamic populist bloc as an as big—if not bigger—threat than Iran at the moment.

Dalia Dassa Kaye: I think if you look at the hierarchy of Emirati priorities, countering the Muslim Brotherhood, countering the Turkish-Qatari axis, is probably highest on their list, and higher than Iran.

Matthew Petti: The Emirati-Qatari rivalry is very overlooked in Washington. People in Washington look at it like a sideshow to the real stuff, which is Iran-Israel, when this is a real conflict, too, and to many of the players, it’s a bigger deal.

Dalia Dassa Kaye: Yes, they have conflicts, and those internal fissures are real, and they are a major factor.

In fact, that has been part of the Trump administration’s approach, to think they were going to form a coalition of so-called moderate states to counter Iran.

But that’s misguided thinking. Again, the calculations are complex among these players. There’s a lot of fissures across the region.

It will be interesting to see what the Qataris do, actually. That’s going to be an interesting country to watch right now.

If you look back historically, in the 1990s, when there was a lot of warming of relations—by the way, not all of this is totally new, that often gets forgotten in reporting—there was multilateral warming between Gulf Arab states and Israel after the Madrid Conference in 1991.

You had trade missions established, Israeli trade reps based in Arab capitals like Doha. So it will be interesting, because the Qataris have a record of warming ties with Israel, too.

All of this, of course, is based in the context of the Israeli-Palestinian peace process progressing.

What’s different about this is the Emiratis seem willing to pull the trigger even without a significant step forward. They see the cover of suspending annexation as sufficient, but that is not equivalent to progress on the Israeli-Palestinian track.

So that’s what is new, but it will be interesting to see how the Qataris respond to this, given that they have been on the side of wanting to improve relations with the Israelis.

They have engagement with the Israelis informally through their financial assistance that they pour into Gaza, to Hamas, and the Israelis have an arrangement with them to keep that going because they don’t want a war breaking out in Gaza.

It will be interesting to see how they respond, given that arrangement, and given their rivalry with the Emiratis.

Matthew Petti: One thing that piqued my interest when this was all happening—this was a day after Times of Israel reported that Mossad was asking Qatar to up the payments to Hamas.

It strikes me as a little bit of behind-the-scenes jostling between the Gulf Arabs to get to the front of the pack for normalizing.

Dalia Dassa Kaye: What’s becoming clear is that there’s not as high of a price to pay for normalizing as there has been in the past.

We know this. This has been an ongoing development for years. The strategic context of the region has changed. There’s too many other priorities and conflicts that are consuming regional leaders and their peoples.

You’ve got a governance crisis which you see plainly in Lebanon. You’ve got the devastating civil wars in Yemen and Syria. The Palestinians have sadly become a footnote for a number of years.

This is really solidifying the new power realities in the region.

There’s less of a price to pay. It’s not to say there’s no price—it’s still somewhat risky—but it’s not as bold as it would have been a decade or so ago to take a step like this, and we know these relationships have been going on for a while.

Knowing, in this administration, there’s so much reward if you do normalize with Israel, it’s almost become its own end goal. That’s different also from past U.S. policy.

Past U.S. policy was about making Israel feel secure so it could make tough compromises for peace.

Now it’s “normalize for its own sake because we want Israel integrated into the region,” which is great, but there’s no longer the same incentive for the Israeli side to make any tough compromises because they can have their cake and eat it, too, as far as [Israeli prime minister Benjamin] Netanyahu’s looking at it.