Here's How the Road to Iraq Is Repeating Itself with Iran 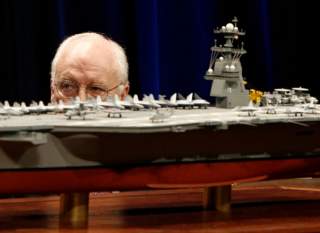 Rob Reiner’s movie “Shock and Awe,” due to hit theaters on July 13, reminds us of the role that provocateurs and conspiracy theorists played in building the case for war with Iraq. (Spoiler alert: this article reveals key movie plot lines, including that the United States did, in fact, invade Iraq in 2003, and that most of the people who led us into that war have evaded accountability for having done so.)

Some of the Iraq war boosters appear in actual clips from the era. We see, for example, Laurie Mylroie on C-Span, peddling her tale of Saddam Hussein’s supposed involvement in the 1993 World Trade Center Attack. We are also treated again to Dick Cheney’s claims of Iraq-Al Qaeda linkages and Saddam’s aluminum tubes on “Meet the Press.” There’s Donald Rumsfeld’s “known unknowns” press conference, and, of course, George W. Bush’s “axis of evil” speech. At other times, names are dropped into dialogue. For example, Reiner, in the role as Knight Ridder DC Bureau Chief John Walcott, mentions Bill Kristol and others at the Project for a New American Century (PNAC) as key figures behind the case for war.

But one character gets special treatment: Ahmed Chalabi. He isn't merely referenced in passing but is also portrayed as the double-dealing charlatan that he was. In one scene, Knight Ridder reporters Jonathan Landay and Warren Strobel (played by Woody Harrelson and James Marsden, respectively), visit Chalabi in his opulent offices in Washington, DC. Actor Jack Topalian plays a suitably smug Chalabi who is utterly disinterested in the truth, and dismissive of those trying to uncover it.

In reflecting on the film, one of the truly shocking things about “Shock and Awe” is the extent to which it mirrors a similar effort underway today.

In late 2001, it was PNAC feeding bogus information from the self-interested Chalabi and his Iraqi National Congress (INC). Today, it’s the Foundation for Defense of Democracies (FDD) calling for regime change in Tehran, and the Mujahedin-e Khalq (MEK) feeding them the information to build the case—and dropping large sums of money on DC insiders.

Meanwhile, the Washington Free Beacon—in the guise of an actual news organization—touts Saudi claims that Iran harbored al Qaeda members prior to 9/11, ignoring that the same could be said about Germany—and, indeed, the U.S. government, which “allowed” the hijackers to live, work and study in Florida and Southern California before anyone knew what they were up to. Furthermore, the Saudi news company al Arabiya cut and spliced the Ali Larijani’s interview in a way that is doubly misleading because it omits his statement “Al Qaeda is Iran’s number one enemy.”

Expatriates and professional agitators have always taken advantage of America's relative openness to influence the public debate here. George Washington worried about French and British agents trying to draw the new nation into Europe's wars. Similarly, the fact that foreign money flows to American think tanks and publications is hardly breaking news. Still, the brazenness of the Iran war hawks’ willingness to peddle the Saudis’ fearmongering, and traffic MEK musings as credible intelligence, is striking.

For one thing, although many Americans were fooled by Chalabi’s double-dealing (and American taxpayers even funded it), one might expect that today’s journalists, with the benefit of hindsight from the Iraq experience, would be more careful about merely recycling the hardly disinterested Saudi’s and MEK’s claims of Iranian perfidy.

Then there is the sheer incongruity of purported advocates for freedom acting as conduits for the Saudis. These are the same Saudis, after all, who always seem prepared to fight to the last American to preserve their medieval monarchy. They're especially interested in Americans fighting Iranians for them. Recall this account, from former Secretary of Defense Robert Gates’s memoir, of a meeting with then-Saudi King Abdullah.

"He wanted a full-scale military attack on Iranian military targets, not just the nuclear sites," Gates wrote. "As far as I was concerned," he continued, "[Abdullah] was asking the United States to send its sons and daughters into a war with Iran in order to protect the Saudi position in the Gulf and the region, as if we were mercenaries. He was asking us to shed American blood, but at no time did he suggest that any Saudi blood might be spilled... The longer he talked, the angrier I got."

Alas, such anger is rare. Shame is also in short supply in today’s Washington. Anonymous officials from Barack Obama’s administration famously referred to Massachusetts Avenue as Arab-occupied territory. But, notwithstanding Donald Trump’s promise to drain the swamp, DC remains as foul as ever.

When scrutiny clears away some of the stench and fog, we will hear the occasional disavowal.

Several months ago, the Associated Press documented the comings and goings of George Nader and Elliott Broidy, two consummate “beltway bandits” who orchestrated a multimillion-dollar campaign on behalf of the Saudis and the United Arab Emirates. At one point, Broidy convinced FDD to stage a conference attacking Saudi rival Qatar. The plan supposedly included the commissioning of “200 articles assigned to the foundation and other think tanks.” FDD CEO Mark Dubowitz, the AP reported, “later said that Broidy assured him the funding was not coming from a foreign government and that he had no contracts in the Gulf.” But Dubowitz didn’t bother to dispute the notion that FDD’s interests might align with those of the Saudi monarchs. (Though his organization's name implies a commitment to defend "democracy," Dubowitz has elsewhere suggested that they might prefer “inclusive authoritarianism”).

There are moments when I worry that a line from “Shock and Awe” is all too accurate: “If they want a war,” Jonathan Landay’s wife Vlatka (played by Milla Jovovich) says to him, “they’re going to get one.”

But I still hold out some hope that Americans are capable of learning from our mistakes, and that they won’t be lied and misled into another war in the Greater Middle East before the other ones the United States started have been concluded.

Then again, John Bolton is National Security Advisor. I’ll have more to say about the MEK’s man inside the White House next week.

Christopher Preble is the vice president for defense and foreign policy studies at the Cato Institute and blogs for The Skeptics at the National Interest.