How the Battle of 73 Easting Was Won 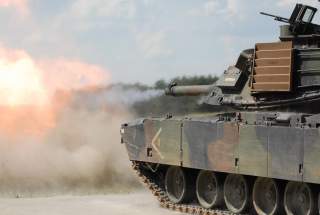 As his driver told me after the fight, despite the obvious and pressing danger, Macgregor was eating snacks as he assaulted through enemy positions, even while attacking individual enemy tanks and giving instructions to the rest of the squadron! This spirit of well-placed confidence—and his dash and élan—were contagious. When we saw our leaders doing under fire what they said they would do in training, all inhibition vanished, and we did our best to mimic them.

Once the battle group had assaulted through the Iraqi defenses and we had a chance to catch our breaths, I remember with great clarity what I saw when I turned around to see the path through which we had just attacked. The landscaped was filled with the carnage of burning tanks, trucks, and more bodies than I could count.

Eagle Troop and other 2nd Squadron units had destroyed an entire brigade of an Iraqi armored division, including dozens of tanks and scores of other armored vehicles and military trucks. The next morning there was a putrid smell created by the combination of the burning vehicles and the flesh of their former occupants. I was grateful none of my friends had been killed, but there was little satisfaction in seeing so much human life sent to certain doom by Saddam Hussein.

The Battle of 73 Easting was a great victory by the U.S. Army, validating the critical importance of having great leaders, solid institutional training, and premier combat equipment. We must always bear in mind, however, the permanent cost it often imposes on both the victors and the vanquished.