How Donald Trump May Push America into a War with Iran 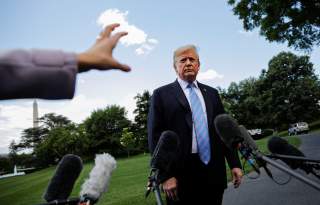 Is the Trump administration readying war plans against Iran? Somebody certainly wants us to think so. The question is who, and for what purpose?

The bombshell New York Times article detailed an updated military plan that was presented by Acting Defense Secretary Patrick Shanahan last week. The plan called for up to 120,000 U.S. troops to be deployed to the Persian Gulf region “should Iran attack American forces or accelerate work on nuclear weapons.” This is cause for alarm. But the plan apparently does not call for a full ground invasion of Iran, which would require a much higher number of troops. And President Trump, who recently asked Iran’s leaders to call him on the phone, seems unlikely to authorize such a war, which would dismay a significant portion of his base as the 2020 campaign picks up.

So, why are we reading about this in the newspaper? One possibility is that the war hawks in Trump’s White House want to publicly signal to Iran and the international community that the administration is prepared to use force in response to Iranian misbehavior. Another possibility is that the anonymous national-security officials who leaked this have grown uneasy about National Security Advisor John Bolton’s determination to attack Iran and change its regime. They might see his recent bureaucratic maneuvers, including a highly unusual visit to CIA headquarters and a recent incident in which he deliberately exaggerated raw intelligence in order to depict a long-scheduled carrier deployment to the Gulf as a deterrent threat to Iran, as dangerously provocative posturing that could unintentionally start a war. A third possibility is that both of these are happening simultaneously.

The ongoing internal drama over Iran policy demonstrates how ill-equipped Trump is for the job of president. Three years into his first term, Trump is on his third national security advisor, his second Secretary of State, and the position of Defense Secretary has been vacant for four months following Mattis’s resignation in December. The president appears unable to unite his own cabinet around a clear strategy.

He has filled his national security team with war hawks and, with Iran tensions rising, the policy results reflect this quite well. The White House recently took the unprecedented measure of designating the Iranian Revolutionary Guard Corps as a terrorist organization, which officials have warned could put U.S. forces in the region at risk. The United States has also embarked on a concerted campaign of economic warfare against Iran, increasing sanctions and bullying the international community into zeroing out imports of Iranian oil. The resultant economic slump has caused tangible pain and suffering among the Iranian people (an intended consequence of the policy) and has bolstered the hardliners in Iran.

There is a lot of sound and fury, but it signifies quite a bit. If you were trying to design a policy that had a high probability of inciting some tit-for-tat escalation leading to war, the Trump administration’s approach to Iran is what you would end up with. The question is, why? Iran has complied with the strict limitations on its nuclear program under the Joint Comprehensive Plan of Action, a deal Trump may want to improve upon but, thanks to his withdrawal from it, can’t. The other parties to the agreement won’t play ball with the one violator of it and Iran certainly won’t capitulate in the face of “maximum pressure.”

So why risk a war with Iran that would be orders of magnitude costlier than the war in Iraq, and would fail just as miserably? The answer is that Trump’s war hawks, and most of the political establishment in Washington, perceive the threat from Iran to be serious when in fact it hardly exists at all.

Americans must begin to appreciate how peculiar it is for a country like ours to be so maniacally obsessed with, and terrified by, a country like Iran. The United States is a global military juggernaut whose core national-security concerns are rendered rather trivial due to its outsize capabilities and its uniquely protective geography, reinforced even further by a reliable nuclear deterrent. Iran is a third-rate military power in a tough neighborhood half a world away. It poses no direct threat to us. Iran’s main regional rivals possess conventional and nuclear capabilities that can deter Iran quite sufficiently. Washington’s phobia of the supposed threat of an Iranian attempt to close the Strait of Hormuz, through which about 30 percent of the world’s crude oil flows, is mostly overheated babble. A sincere attempt would be damaging to Iran’s own economic self-interest, not to mention its security, as retaliation would surely be swift. Additionally, Iran’s much ballyhooed support for non-state actors, mostly Hezbollah, Hamas, and the Houthis in Yemen, does not present a real threat to America. Those groups have local concerns. Hezbollah and Hamas are almost exclusively focused on Israel, and the Houthis in Yemen are a nationalist movement. These are not transnational terrorist groups spending time trying to hatch 9/11 style plots against America.

How is it that the United States of America can get whipped up into such a hysteria over such a weak, distant, and hemmed in Iran? Much of Washington seems unable to properly assess risk. Threat perceptions on Iran are fueled by an outdated enemy image where Iran plays the role of the villain, but presents no objective direct threat to this country.

The president’s political calculations, along with a national-security bureaucracy that mostly appears resistant to another disastrous U.S. war in the Middle East, make a deliberate attack against Iran unlikely. But the Trump administration’s frenzied provocations could lead us to the brink of a conflict that almost no one actually wants. The fact that the threat justifying this posture is largely in the imaginations of a few ideologues in Washington only sharpens the sense of irony—and tragedy.

John Glaser is director of foreign policy studies at the Cato Institute.