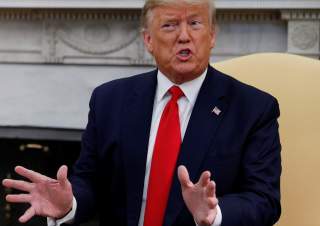 The U.S. military said a Chinese warship recently directed a military-grade laser at a Navy surveillance plane over the Pacific Ocean, risking temporarily blinding the crew. While troubling, this is not surprising given the increased tensions between Washington and Beijing. And this latest incident is likely to stoke fears among the U.S. pundits and policymakers who already argue for economic and military containment and confrontation of China. While increasingly dominant in Washington, this view is wrong—China is neither as aggressive nor as challenging as threat inflators proclaim.

One need not believe China is a friendly actor to argue that the United States. is sailing into a needless, costly, and uncertain confrontation based on lazy analysis and threat inflation. Worse, this same logic is undermining the United States’ long-term ability to contain China if and when such a policy becomes reasonable. A rethink of the U.S. approach to China—one that more realistically emphasizes constraining Chinese dominance in Asia and ensuring U.S. economic opportunities in the region—is in order.

Though pundits portray American goals as defensive and China as the challenger, actual evidence of Chinese aggression is questionable, based largely on China’s assertiveness in pursuing its territorial claims in the South and East China Seas. The claims are suspect but are also long-standing features of PRC policy. Ironically, it is thus possible that China sees itself as acting defensively. And while the tactics adopted to assert these claims over the last decade—constructing military bases on the contested territories, sending ships and aircraft to the area, and so on—are novel, equating these with a threat is off-base. Rather, the exercise appears an attempt to make pre-existing claims more credible; to paraphrase from Middle Eastern discussions, China is creating facts on the sea.

Neither is the military balance changing dramatically in China’s favor. Of course, China is winnowing down U.S. military advantages. Still, most analyses acknowledge that it lags behind the United States in quality, skill, and spending. Even if—as the RAND Corporation notes—the United States is being squeezed in the areas near China itself, it retains significant advantages that can prevent Beijing from making the Pacific a Chinese lake. Chinese strength is growing, but this is not nearly akin to a China military threat to the whole of East Asia.

Of course, threat inflators would argue that Chinese territorial claims and military efforts are inherently problematic and require a U.S. response. This logic, however, is flawed. Few countries willingly tolerate unfavorable military balances, contested territories, and foreign presence near their homelands. Case in point, the United States repeatedly threatened war with Britain, Spain, and France in North America during its own rise in the nineteenth century. And more recently, U.S. leaders reacted with hostility to suggestions that Russia might deploy forces to Venezuela to address that country’s unrest. States don’t like foreign forces and territorial ambiguity near their turf—China is no different.

What, then, is going on? At root, commentators’ reactions reflect the ingrained desire among many analysts to keep the U.S the strongest state in Asian politics, rather than Chinese behavior per se. And here, China is tailor-made for threat inflation. After all, for the first time since the USSR’s collapse, there is an economically-capable, populous, militarily-potent state that exists outside the U.S. orbit. That it is led by an autocratic, notionally Communist regime reinforces the trend.

By building up the China threat now, those committed to American preeminence abroad are calling for the U.S. to ensure its preponderance by attempting to suppress a possible competitor.

Ironically, this is the opposite of what the United States should do if it were serious about limiting an aggressive PRC. In the face of a real challenge, geography, interests, and the trends in military technology imply that thwarting Chinese aggression is best served encouraging local states to build up their defenses to the greatest extent possible. By instead injecting itself as a security guarantor, the United States encourages nations such as Japan and Vietnam to underinvest in their security. This can allow local capabilities to atrophy to the point where they have little to contribute against China, instead of fostering a capable regional coalition designed to hem Beijing in with Washington as the backstop of last resort. Not coincidentally, it also requires the United States to work hard and expend more of its time and money—resources that could be better used at home to, say, shore-up the United States’ faltering infrastructure.

In short, limiting the U.S. response rather than preventively reacting to trumped-up charges of a China threat is the United States’ best play. In doing so, not only will the United States avoid triggering a needless security spiral, but it offers the best route to hedge against any future problems with the PRC.

Ultimately, China is not the threat claimed, and inflators’ prescriptions are a recipe for overstretching and needless risk. It is not too late for the United States to soberly address China’s rise.

Joshua Shifrinson is an assistant professor of International Relations at Boston University. He is the author of Rising Titans, Falling Giants: How Great Powers Exploit Power Shifts.