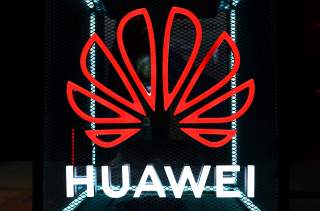 British politics have been upended by Brexit ever since that fateful day in June 2016, when the British public surprised the world and voted to leave the European Union. The last three years and seven months have consisted of two British prime ministers, Theresa May and Boris Johnson, trying to figure out how to implement the Brexit separation with the least amount of damage to the UK’s economic and diplomatic power as possible.

Brexit, however, has moved over as of late to make room for another important issue—whether Huawei, the Chinese telecommunications company, will be granted permission to build Britain’s 5G telecommunications infrastructure. After considerable debate and division in the cabinet, Prime Minister Johnson decided to allow Huawei into the British system. For Johnson, the Chinese company is the most cost-efficient way to introduce the fastest internet connections available.

The Huawei issue is not just another kerfuffle in the rough British political wilderness. It also represents the geopolitical battle now underway between the United States and China, two global powerhouses that are trying to gain an advantage over the other.

We tend to focus on the South China Sea as the main theater of competition in this rivalry. But the U.S.-China tug-of-war is about much more than military modernization and territorial control, the traditional indicators of strength, power, and prestige in international politics. The battle is playing out across multiple domains, from infrastructure development and trade to technology, cybersecurity, intellectual property, and manufacturing. The dispute over Huawei and the pressure countries like Britain and Germany are experiencing from both Washington and Beijing will become a feature of the great-power game throughout this century.

The U.S. and China are both treating Huawei as if it were an existential issue. The Trump administration has given its British and German allies an earful about how irresponsible it would be to allow a company with links to the Chinese Communist Party to access to their networks. The concern is a reasonable one: once Huawei gains access, Beijing could attain an intelligence bonanza about any British and German citizen who used its 5G services. As deputy national security adviser Matt Pottinger hinted during a recent trip to India, Washington is red-faced with frustration that London is even considering such a decision.  It just doesn’t compute for many in the White House. Secretary of State Mike Pompeo, Treasury Secretary Steve Mnuchin, and U.S. Ambassador Woody Johnson have come out forcefully over the last week to warn their UK colleagues about outsourcing UK sovereignty for the sake of cheap Chinese equipment. The administration is so intent on blocking the Chinese from the British market that it supposedly threatened to cancel talks on a new trade deal (the threat has eased after Trump and Johnson held a phone call).

The United States is not the only side with leverage. China has made it clear to the Germans in particular that prohibiting Huawei from their telecoms networks would provoke a damaging Chinese response, possibly through tariffs on German automobiles or the capping of Berlin’s market share. Given that China is one of the biggest export markets for German cars, this is a threat Angela Merkel needs to take seriously as she proceeds with her own review on the matter. As Beijing’s Ambassador to Germany Wu Ken warmed last month, “If Germany were to make a decision that led to Huawei’s exclusion from the German market, there will be consequences.”

London and Berlin are trapped in a damned-if-you-do, damned-if-you-don’t situation. They are sheep surrounded by two wolves in Washington and Beijing, placed in the unenviable position of taking sides in a contest some experts are likening to a new Cold War. Even if Boris Johnson and Angela Merkel do manage to thread the needle on this specific challenge, rest assured: as time goes by, Europe, South Korea, Turkey, Saudi Arabia, Iraq, and swaths of Africa won’t be able to escape the geopolitical rivalry for long.