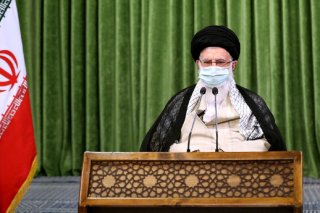 Iranian authorities announced that they had broken up an alleged spy ring on Monday, but continue to downplay reports of an Israeli or U.S. role in the series of explosions rocking Iran.

Iran has been stricken with mysterious fires and explosions over the past two weeks, including an explosion that destroyed part of the nuclear research complex at Natanz two weeks ago. The New York Times and other Western outlets have reported that Natanz was attacked as part of a joint U.S.-Israeli “short-of-war” strategy against Iran.

Iranian officials have downplayed reports of an attack inside the country.

“It is still too early to make any judgment on the main cause of the blast [in Natanz], and relevant security bodies are probing into every detail of the incident,” foreign ministry spokesman Abbas Mousavi told the state-run Fars News Agency on Friday, accusing foreign media of trying to “hype” Israel’s strength.

Mousavi promised that Iran would have a “severe reaction” if foreign involvement was proven.

A few days later, authorities claimed to have broken up a foreign spy ring.

“A number of elements affiliated to the foreign intelligence agencies were arrested in Kerman,” a province in southeastern Iran, local judge Ahmad Qorbani told Fars News on Monday.

Authorities did not publicly connect the espionage case to the Natanz incident, nor did they announce any new evidence linked to the explosion.

However, it may be more and more difficult to deny the role of sabotage in the Natanz explosion. Evidence has mounted since the day of the incident that it was an attack by either foreign spies or domestic saboteurs.

A group calling itself the “Homeland Cheetahs” contacted the BBC to claim responsibility on the day of the explosion, hours before anyone had reported damage to the Natanz site.

The next day, Iran’s Supreme National Security Council declared that it already knew the cause of the explosion, but would not disclose it for “security reasons.”

Iranian authorities’ ambiguity appears to be part of a strategy to keep Iran’s options for retaliation open. Behrouz Kamalvandi, spokesman of the Iranian atomic energy agency, explained this strategy in a Monday op-ed.

“There is no doubt that the honorable Iran will adopt its measures based on the country’s interests,” he wrote. “The strategic and inviolable policy of the Islamic Republic in different cases and positions is a smart and wise reaction based on the three principles of honor, wisdom and expediency.”