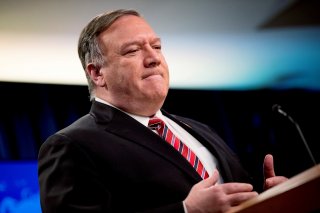 Sen. Elizabeth Warren (D–Mass.) sparred with Secretary of State Mike Pompeo over international law on social media as the Trump administration increasingly signals that it is angling for a showdown over Iran at the United Nations Security Council.

The Trump administration has focused on undoing the Joint Comprehensive Plan of Action (JCPOA), a 2015 agreement between Iran, Germany, and the five permanent members of the Security Council. Pompeo’s State Department is now arguing that it can use an arcane legal maneuver to last vestiges of the deal.

Warren wrote a public statement defending the deal on Tuesday. Pompeo took the opportunity to test out his legal argument in public two days later.

Iran is banned by the United Nations from buying and selling weapons, but under Security Council Resolution 2231, the arms embargo will expire five years after the JCPOA was implemented—unless a “participating member” to the deal objects.

Brian Hook, the U.S. State Department official overseeing Iranian affairs, had claimed in February that the United States could still snap back the arms embargo even though “we are out of the deal.”

The Trump administration is now reportedly planning to do that after Iran launched a military satellite last week.

“To extend this arms embargo, the Trump admin is suddenly arguing that the US is a party to the same Iran Deal it abandoned. That makes no sense. Make up your mind,” Warren wrote on April 28, tagging Pompeo’s public account.

The Secretary of State unexpectedly responded on Twitter, arguing that “our rights under UNSCR 2231 are separate from the JCPOA” because they are two separate documents.

“But I’ll put you down for Chinese arms sales to Iran on October 18,” he added. “Which weapons is it okay with you if they send? A couple of divisions of VT-4 tanks good?”

Warren shot back, citing Resolution 2231, which “encourages the US to resolve disputes through the Iran nuclear deal—the same one you withdrew from, limiting our options and making us less safe.”

“But can I put you down for reentering the #IranDeal?” she added.

Richard Johnson, who served as acting deputy lead coordinator for Iran Nuclear Implementation at the State Department until 2018, told the National Interest last week that Pompeo’s planned move could lead to an “ugly” fight in the Security Council.

“It’s going to be messy from a Security Council standpoint because, regardless of what [Britain, Germany, and France] think, Russia and China are not going to sign up to that legal interpretation,” an unnamed European official told Reuters.

The JCPOA restricts Iran’s nuclear research program in exchange for opening international markets to Iran. Iran has violated some of the nuclear restrictions in retaliation for economic sanctions imposed by the Trump administration but is still allowing international inspectors to examine its nuclear sites under the deal.

Iran has signaled its intentions to return to the JCPOA if the United States does so. So has Democratic presidential nominee Joe Biden—if the deal still exists after the 2020 election.

“[T]he Trump administration abandoned the Iran nuclear deal in favor of a ‘maximum pressure’ strategy that has badly backfired, encouraging Iran to become even more aggressive and restart its nuclear program,” he said in an April 2 statement.