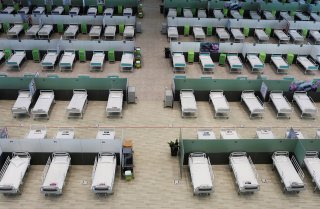 Economic mismanagement, U.S. economic sanctions, and infighting between government agencies have hamstrung Iran’s fight against the novel coronavirus, which has killed over 3,800 Iranians as of Tuesday. Campaign Nafas (the Breath Campaign) is rushing into the breach.

The campaign, created by two hundred of Iran’s most important companies, has been able to import over half a million N-95 respirator masks from China despite bureaucratic red tape from the Iranian customs authorities.

Campaign Nafas is producing its own protective equipment at two sites in Tehran and Yazd, a city of half a million inhabitants in central Iran. It has also opened a testing center in Tehran with the capacity to see three hundred patients per day.

Jahanpur claimed that “the recovery process has accelerated,” citing 27,039 novel coronavirus disease (COVID-19) patients who have been discharged from hospitals so far. He said that nearly four thousand COVID-19 patients are still hospitalized.

“We are hoping that the exertion and seriousness that people have exercised towards controlling the disease in recent weeks will continue in the coming days,” he concluded.

Jahanpur warned on Monday that Iran could see the spread of coronavirus accelerate again as the health ministry clashed with other ministries over lifting quarantine measures across the country.

President Hassan Rouhani sided with his industry minister, ordering businesses to reopen in Tehran this week and in the provinces next week. He denied that there was any conflict within his administration over the decision.

Meanwhile, the Trump administration continues to deny that its “super-maximum economic pressure” campaign against Iran plays a role in the coronavirus crisis.

“Iran’s slick foreign influence campaign to obtain sanctions relief is not intended for the relief or health of the Iranian people but to raise funds for its terror operations,” the U.S. State Department said in a Monday night statement. “Sanctions [sic] are not preventing aid from getting to Iran. The United States maintains broad authorizations that allow for the sale of food, agricultural commodities, medicine, and medical devices by U.S persons [sic] or from the United States to Iran.”