It's Time to End U.S. Support for the Saudi War on Yemen 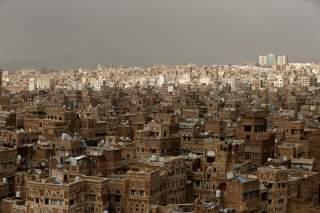 China and especially Russia cannot fulfill ambitious economic development plans; Saudi Arabia requires American and European participation. Most importantly, who else would promise to protect the licentious princes and princesses as they mulct their people while treating Islam as a libertine license? With just one and two rudimentary aircraft carriers, respectively, Moscow and Beijing will not be sending their armadas, to use Trumpspeak, to the Persian Gulf.

The Kingdom of Saudi Arabia is not the first murderous dictatorship with which America has dealt. Doing so may be necessary, but always should be done reluctantly, without illusion. Policy should focus on achieving Washington’s objectives at the least cost.

The United States should seek a regional balance, not Saudi hegemony. The KSA has proved far more brutal and destabilizing than Iran: invading one neighbor; kidnapping the leader of another; launching a diplomatic offensive, backed by the threat of military action, against a third; and supporting radical insurgents against a fourth. Washington should end all support for the Yemen war and terminate further weapons sales until the kingdom draws down that conflict.

While remaining formally friendly toward Riyadh, the Trump administration should indicate that business as usual is impossible with a regime that has made ostentatious irresponsibility the bedrock of its foreign policy. In just four years MbS has directed multiple foreign disasters and humiliations. It would be wise for the king and other members of the royal family to ponder whether they should move forward with a leader who guarantees continued embarrassment for and estrangement from those nations once most friendly to the KSA.

Moreover, Washington should denounce Riyadh’s crimes. The United States lacks credibility when it criticizes Tehran but ignores the fact that Saudi Arabia remains a totalitarian state both politically and religiously—despite MbS’ presentation as the great reformer, not one church, synagogue or temple operates. Indeed, the country has become even more repressive under the crown prince. Khashoggi’s murder and dismemberment simply highlighted a brutal policy already evident to Saudis at home. Secretary Pompeo, who falsely certified that Riyadh was acting to limit civilian casualties in Yemen, should attempt to keep his hypocrisy within more modest bounds.