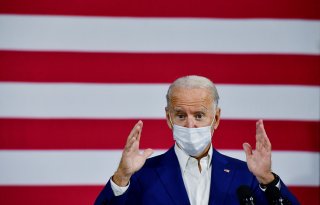 That astute observation was made by none other than Sen. Joe Biden on the Senate floor during a June 5, 1986 debate on U.S. arms sales to Saudi Arabia. It’s one Biden, now the Democratic presidential nominee has carried with him thirty-six years later.

Being slapped with the “establishment” label is typically associated with a few common traits. One, sticks like military force and sanctions are perhaps even more important than the carrots of diplomacy in pursuit of the U.S. national security interest. Two, the United States must preserve military primacy in order to prevent adversaries and competitors like Russia and China from swooping in and claiming the mantle of global leadership. And three, the Kingdom of Saudi Arabia is too big to fail due to its influence over oil supplies. On the third assumption at least, Biden is solidly on the other side of the camp—the former senator and vice president views the Saudi royal family as more trouble than they are worth and implacably opposed to any social and/or political change.

Joe Biden may not be a member of the restraint camp, but his opinions on Saudi Arabia are very much aligned with the likes of a Stephen Walt or a Barry Posen. He believes that Riyadh is often as destabilizing to the Middle East as Iran, that its leadership takes U.S. support for granted, and that the two countries often have diverging national interests.

On October 22, 2001, five weeks after the 9/11 terrorist attacks (fifteen of the nineteen hijackers were Saudi citizens), Biden gave an interview to the Council on Foreign Relations. Riyadh, he said, was doing far too little on rooting out Islamic extremism within its own ranks and have indeed perpetuated the problem by funding madrassas in South Asia. “I do not doubt the pressure that the Saudis are under, like other Arab states in the region, having to essentially buy off their extreme groups in order to maintain themselves,” Biden said. “But the Saudis have gone above and beyond the call in destabilizing the region, in my view, in terms of essentially funding a significant portion of what we are now dealing with in the extreme example of Islam gone awry.” The solution, according to Biden, was to engage in “a very simple, straightforward discussion” with Saudi Arabia in order to send the message that, ultimately, Riyadh needs the United States a whole more than the United States needs Riyadh.

The rollout of the Arab Peace Initiative with Israel five months later didn’t buy the Saudis much goodwill with the senator, either. Although the peace plan itself was historic, offering Israel normalization with the Arab world in exchange for the creation of a sovereign, independent Palestinian state, Biden at the time was largely unimpressed. The gap between what the Saudis say and what that they do was too great and needed to be bridged. “I am troubled by the apparent disconnect between the initiatives for peace taken by the Crown Prince [of Saudi Arabia] and his nation and the contradictory behavior that is prevalent in Saudi Arabia and its policies,” he said in a Senate floor speech on April 25, 2002. As long as Saudi newspapers continued to publish articles with “vile, anti-Semitic” diatribes, the United States would have trouble believing the Saudis were truly interested in establishing regional peace.

Then there was the time in 2004 when Biden compared Saudi Arabia to a gas station owner who was dealing drugs out the back door. "Saudi Arabia is becoming our problem as well as our ally,”  Biden told PBS at the time. Asked what the United States is getting out of its relationship with Riyadh, Biden was point-blank: "Well, I don’t feel we’re getting something anymore. And I realize I’m an odd man out. Five years ago I started saying this.” The next year, Biden would introduce a comprehensive piece of anti-terrorism legislation calling out Saudi Arabia for “an uneven record in the fight against terrorism, especially with respect to terrorist financing,” even as it sought to increase intelligence and counterterrorism cooperation between Washington and Riyadh.

Joe Biden, in other words, started kicking Saudi Arabia before it was cool to do so.

The former vice president’s comments on the Saudis have hardened with time. Biden has made no bones out of the fact that he doesn’t have any respect or admiration for Crown Prince Mohammed Bin Salman, whose short tenure as the country’s de facto leader has built a mountain of mistakes for the Kingdom of Saudi Arabia—including Riyadh’s worst diplomatic kerfuffle with Washington since 9/11. Shortly after the state-sanctioned assassination of Washington Post columnist Jamal Khashoggi in Saudi Arabia’s Istanbul consulate, Biden reiterated that he long had doubts about Mohammed bin Salman (MBS). “There is very little sense of rule of law, respect for human rights” under MBS’s leadership and that “absolutely, positively” there should be consequences if the crown prince ordered the operation (the CIA would later assess with high confidence that MBS personally blessed the killing). If Biden’s past performance during the Democratic presidential debates are any indication, a ban on weapons sales to the Kingdom of Saudi Arabia could be one of those consequences.

If I was an adviser to the Saudi royal family,  then I would tell them to be deeply worried about what a possible Biden presidency would have in store for them. U.S.-Saudi relations may be in relatively calm waters today, but a storm could be brewing on the horizon.