Joe Biden On Syria: What Would He Do? 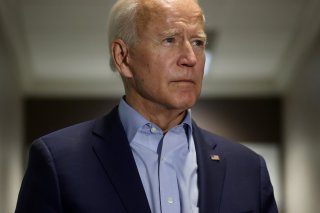 President Donald Trump once described Syria as “sand and death,” a conflict-ridden land where barrel bombs and artillery shelling might as well be in the daily weather forecast. The comment created a lot of controversy at the time from experts and commentators, but you can’t blame Trump for viewing Syria as a lost cause. After nearly a decade of fighting—including dozens of chemical weapons attacks perpetrated by the Syrian government (some of which included sarin and VX nerve agent)—Syria is a poor, fragmented, economic basket-case of a nation where over 11 million people require some form of humanitarian assistance to survive. Nearly 7 million are internally displaced, and entire cities lie in rubble and ash. The war has destroyed the country’s infrastructure; it will likely take a generation (and at least $400 billion in reconstruction money) for Syria to return to its pre-war level.

We know what Trump thinks about Syria. But what about his opponent, former Vice President Joe Biden?

While it’s tempting to push Biden into the interventionist camp that continues to dominate Washington’s foreign policy establishment, the former veep was actually one of the Obama administration’s leading skeptics about what the United States could do in Syria—and indeed, whether the U.S. should do much of anything at all short of providing humanitarian aid. According to the New York Times, Obama administration officials don’t remember Biden being a major proponent of supplying weapons and training to the anti-Assad opposition. Biden’s reluctance was in strong contrast to his colleagues at the time, including CIA Director David Petraeus, Secretary of State Hillary Clinton, and Secretary of Defense Leon Panetta, who worked together to present a plan to the White House that would in effect create a new rebel army with the purpose of ousting the Syrian dictator from power.

Sending tens of thousands of U.S. troops into Syria in some humanitarian operation was also a non-starter for Biden. During the 2012 vice presidential debate against then-Congressman Paul Ryan, Biden excoriated then-GOP presidential nominee Mitt Romney for his pro-war talk. “[W]hat more would they do other than put American boots on the ground,” Biden pondered during the debate. "The last thing America needs is to get into another ground war in the Middle East requiring tens of thousands if not well over a hundred thousand American forces.”

Four years later, during the closing months of the Obama presidency, Biden expressed the same misgivings about a more interventionist U.S. policy in Syria. While there may be a long list of critics on how President Obama handled the conflict, Biden told PBS, none of them have put forth a realistic alternative. This includes the 51 career foreign service officers who signed a dissent cable at the time, in which they strongly condemned what they called an inadequate U.S. policy. "The president and I and previous presidents support the right of any diplomat to have a secure channel to voice a different view,” Biden commented during the same interview. “But there is not a single, solitary recommendation that I saw that has a single, solitary answer attached to it -- how to do what they're talking about."

Biden’s skepticism didn’t dissipate with time, even as the war got bloodier. In 2014, in what commentators referred to as a “gaffe,” the vice president stated that there was no such thing as a “moderate middle” in the Syrian civil war and that Washington’s partners in the Middle East have actually worsened the situation by sending arms and supplies to extremist groups on the ground. "They were so determined to take down Assad, and essentially have a proxy Sunni-Shia war, what did they do,” Biden asked during a speech at Harvard’s Kennedy School. "They poured hundreds of millions of dollars and tens of tons of weapons into anyone who would fight against Assad—except that the people who were being supplied, [they] were al-Nusra, and al-Qaeda, and the extremist elements of jihadis who were coming from other parts of the world.”

Biden would later go on to apologize to Turkish President Recep Tayyip Erdogan for his remarks, but history has largely proven the vice president right.

None of this, however, implies that Biden would support a full withdrawal of U.S. forces from Syria. In fact, he is on the record supporting a small contingent of U.S. troops in Eastern Syria for the foreseeable future. Keeping a few hundred troops to protect the Kurds, he told the Wall Street Journal last November, “makes a lot of sense.” A month earlier, Biden slammed Trump’s order to remove U.S. troops from Syria as an “outrageous” decision that would provide the Islamic State “a new lease on life.”

Biden’s solution: preserve a small U.S. military footprint to ensure U.S. special operations forces are able to disrupt ISIS. Former Deputy Secretary of State Antony Blinken, Biden’s chief foreign policy adviser, has gone a step further, suggesting that a Biden administration would leverage the remaining U.S. troop presence near Syria’s oil fields to force Bashar al-Assad to negotiate a political transition. Of course, the inevitable follow-up question arises: why would Assad, who is in his strongest military position since the war began over 9 years ago, agree to negotiate his own surrender?

On Syria, Joe Biden is not Hillary Clinton. He doesn’t appear to have any interest whatsoever in removing Assad by force and isn’t supportive of pouring tons of U.S. weaponry into the hands of what is now a jihadist-dominated anti-Assad opposition in the north.

But neither is Biden willing to pull American troops out on Syria. As the presidential debates approach, the moderators should ask the long-time senator and former vice president to explain in detail why he believes keeping the U.S. military in a dangerous environment—where U.S. forces have already gotten into clashes with Russian troops, Turkish soldiers, and pro-Syrian government militias—is in the U.S. security interest. And just as importantly, what a long-term U.S. residual presence would actually accomplish.