Klobuchar: Funding States Is the ‘Number One’ Priority For Coronavirus Phase Four 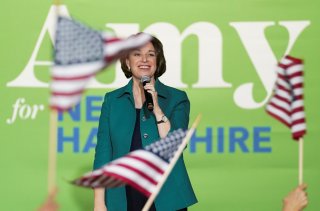 Funding for state governments will be the “number one” priority for the next coronavirus relief package, Sen. Amy Klobuchar (D-Minn.) told the National Interest.

The Senate returned to work on Monday, opening the possibility of a “phase four” package of legislation to deal with the ongoing coronavirus pandemic. Republicans are pushing back against a more relief spending at the moment, but Democrats considered the national pandemic response unfinished business.

Klobuchar previewed some of her priorities alongside Sen. Chris Coons (D-Del.) at a press call hosted by the Center for American Progress on Tuesday afternoon.

The Minnesota senator warned that states could go bankrupt due to the economic downturn and the cost of the coronavirus response.

State and local governments cannot run a deficit as easily as the federal government, and many have already begun layoffs and pay cuts in response to the coronavirus crisis.

“Why should the people and taxpayers of America be bailing out poorly run states (like Illinois, as an example) and cities, in all cases Democrat-run and managed, when most of the other states are not looking for bailout help? I am open to discussing anything, but just asking?” President Donald Trump wrote on Twitter last week.

It is constitutionally-questionable whether U.S. states can actually declare bankruptcy. McConnell has instead hinted that he would use aid to states as leverage to force austerity measures.

“We’ll certainly insist that anything we’d borrow to send down to the states is not spent on solving problems that they created for themselves over the years with their pension programs,” he said on April 21.

Klobuchar and Coons held the call on Tuesday to discuss federal support for vote-by-mail, another proposal that has opened up a partisan divide around coronavirus relief.

Many Republican voters and some Republican state governments have opposed expanding absentee voting, which Trump has alleged would open the door to widespread election fraud.

“No one should be forced to choose between their right to vote and their health,” Coons said.

Klobuchar also said during the call that she would also like to see “continued work on things like broadband to allow students to continue to learn” and “the issue of [coronavirus] testing.”

Coons took the opportunity to tout a proposal in the House of Representatives to mobilize AmeriCorps and Federal Emergency Management Agency volunteers for nationwide contact tracing—that is, identifying and tracking the contacts of infected individuals.

“Unemployment and worker protections are going to be very important,” Klobuchar added.