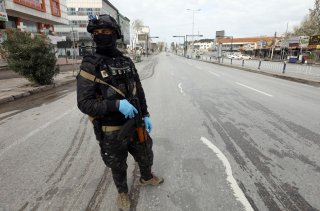 Syrian Civil Defense and the Kurdish-led Syrian Democratic Council have been sparring over whether to lift sanctions aimed at the Syrian economy in the face of the growing coronavirus threat.

International calls are mounting for the United States and its allies to lift international sanctions in light of the novel coronavirus disease pandemic, but groups opposed to Bashar al-Assad’s regime in Damascus disagree on whether the economic sanctions campaign aimed at Damascus harms ordinary Syrians as well.

The Syrian Civil Defense, also known as the White Helmets, called for the international community to reject any demands for sanctions relief. The search-and-rescue group, which operates in the rebel-held northwest, warned that “any economic aid provided to the Syrian regime will be used to support the regime itself and its networks of corruption.”

The March 22 statement also claimed that the regime has a “far too atrocious record of targeting and destroying hospitals and killing medical personnel to be trusted to act out of genuine concern for the health of Syrians,” and asked international organizations to push for access to Syrian prisons.

But another group opposed to Assad’s rule, the Kurdish-led Syrian Democratic Council (SDC), contended that sanctions are hurting the population as well as the regime.

Sinam Mohamad, the SDC’s chief diplomat in Washington, told the National Interest on Monday that sanctions are having a “negative effect” on the entire population due to high prices caused by the depreciation of the Syrian lira relative to the dollar.

She added that a “political solution for the Syrian crisis” has become “critical” due to the addition of the coronavirus crisis.

The SDC is the political wing of the Syrian Democratic Forces, which controls large parts of northeastern Syria.

Syria reported its first death from the coronavirus in the government-controlled territory on Sunday. Religious pilgrims returning from Syria may be spreading the coronavirus to neighboring Iraq as well. International observers have warned that territory controlled by the northwestern rebels, the Syrian Democratic Forces, and the Assad regime are all dangerously vulnerable to coronavirus outbreaks.

The United States and European Union have imposed various human-rights related sanctions against the Assad regime since the Syrian Civil War began in 2011. U.S. Congress most recently passed the Caesar Act, which cements the sanctions regime targeting various sectors of the Syrian economy, in January 2020.

U.S. sanctions law exempts humanitarian organizations operating in Syria, and the U.S. Treasury has issued numerous general licenses for financial transactions to rebel groups in the northwest, where the White Helmets operate.

But the U.S. Treasury has not issued these licenses to the SDC-affiliated autonomous administration, preventing it from exporting oil or performing many other transactions with the outside world.

The United Nations stopped using a border crossing into SDC-controlled territory for humanitarian aid last year, forcing the SDC to rely on the central government in Damascus. The border crossings from Turkey to the rebel-held northwest remain open.