Learning from the Folly of Middle Eastern Regime Change 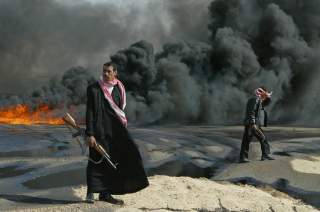 The hostile reaction among most members of Washington’s political and media elites to President Donald Trump’s decision to withdraw U.S. troops from Syria involves several factors. One is simply a knee-jerk (largely partisan) rejection of any policy Trump proposes on any issue, foreign or domestic. Another is policy inertia that makes it difficult to dislodge a military commitment once undertaken. The United States still has military forces in such places as Germany, Japan and South Korea decades after the original rationales disappeared. Such inertia also helps account for the resistance to Trump’s planned troop withdrawal from Afghanistan. Still another element in the case of Syria policy is the lobbying effort by foreign powers (primarily Israel and Saudi Arabia) determined to keep the United States heavily engaged in the Middle East.

There is one other reason for the entrenched resistance to ending the Syria mission: a reluctance to acknowledge the failure of any high-profile U.S. foreign-policy venture, regardless of the accumulating evidence. That unhealthy attitude goes back at least as far as the Vietnam War. The survival (and increasingly likely victory) of Syrian leader Bashar al-Assad is a graphic reminder that Washington’s strategy of forcibly ousting targeted secular dictators in the greater Middle East (what George W. Bush described as America’s “freedom agenda”) has been a fiasco. The architects of and cheerleaders for Washington’s regime change crusades stubbornly resist acknowledging how badly their cherished policy has flopped. In all three cases, though, it is clear that U.S. policy made already bad situations much worse.

The naïve assumption of interventionists that U.S.-orchestrated forcible regime change would usher in new, democratic political systems was evident in Iraq, Libya and Syria. Washington’s support for Iraqi dissident Ahmed Chalabi and his Iraqi National Congress suggested that U.S. objectives went beyond countering the threat of Saddam Hussein’s phantom weapons of mass destruction.

President Bill Clinton’s comments upon signing the Iraq Liberation Act in 1998 underscored that point: “The United States wants Iraq to rejoin the family of nations as a freedom-loving and law abiding member. This is in our interest and that of our allies within the region. The United States favors an Iraq that offers its people freedom at home. I categorically reject arguments that this is unattainable due to Iraq's history or its ethnic or sectarian makeup. Iraqis deserve and desire freedom like everyone else.”

That broader goal also animated the Bush administration. Speaking in August 2002, Vice President Dick Cheney cited the alleged WMD threat, but he added that Washington’s objective was nothing less than “an Iraq that has territorial integrity, a government that is democratic and pluralistic, a nation where the human rights of every ethnic group are recognized and protected.” Such a country would know “they have a friend and ally in the United States of America.” President Bush expressed even more grandiose goals for Iraq and the region. He asserted flatly that the desire for freedom and democracy was universal. “Muslims desire to be free just like Methodists desire to be free,” Bush intoned at one point during an interview with friendly, mostly conservative, journalists. His statement was an explicit rejection of assumptions that cultural factors played any role in popular attitudes toward the role of government, democracy or respect for individual rights.

The results of the Iraq war, of course, were far more negative than the benign scenario that Clinton and Bush administration officials predicted. Yet U.S. expectations about fostering democracy were evident again when Barack Obama’s administration decided to help Libyan insurgents overthrow Muammar el-Qaddafi. Once again, the United States led an effort to eliminate the longtime secular dictator of a fragile, artificial country, based on little more than a pious hope that the aftermath would be more stable and democratic. Benjamin H. Friedman, a senior fellow at Defense Priorities, noted a key argument that Secretary of State Hillary Clinton made for supporting Libya’s rebels in 2011 “was that a rebel victory over the Gaddafi government would make Libya a liberal democracy.”

President Obama certainly assumed that Qaddafi’s overthrow would produce a much-improved governmental system in Libya. “Tripoli is slipping from the grasp of a tyrant,” the president stated during the latter stages of the war. “The people of Libya are showing that the universal pursuit of dignity and freedom is far stronger than the iron fist of a dictator.” In his remarks regarding the dictator’s gruesome death at the hands of rebel forces in October 2011, Obama asserted that “the dark shadow of tyranny has been lifted” from Libya. He urged the citizens of that country to “build an inclusive and tolerant and democratic Libya that stands as the ultimate rebuke” to the former oppressor.

The gap between Washington’s expectations and the actual results was at least as great in Libya as it was in Iraq. Post–Qaddafi Libya became a cauldron of bloody chaos among rival (often Islamist) militias and competing governments. Instead of being a regime change, democratic success story, Libya today is Somalia on the Mediterranean. Among other effects, the conflict has produced more than a million refugees, including hundreds of thousands of desperate souls trying to flee across the Mediterranean in overloaded, leaky boats, with tens of thousands perishing in the attempt.

Incredibly, neither Obama administration officials nor the broader foreign policy establishment seemed to learn any sobering lessons from the spectacular failures in Iraq and Libya. The administration decided to meddle in the rebellion that erupted against Syria’s Bashar al-Assad in 2011. Already in 2012, Washington was sending “nonlethal” aid to rebel factions, and the following year, the administration acknowledged that it was shipping weapons to selected groups.

Once again, U.S. leaders seemed to see what they wanted to see among the so-called freedom fighters the United States was backing. Early in the conflict, Secretary Clinton insisted that the United States embraced the goal “of a democratic, pluralistic Syria that would uphold the rule of law and respect the universal rights of all of its people and every group, regardless of ethnicity, sect or gender.”

Such assumptions, if sincerely held, suggested that U.S. officials were operating in their own fantasy world. Syria was a brittle ethno-religious tapestry, with bitter feuds pitting the Sunni Arab majority against the Assad-led coalition of Shiite, Christian and other religious minorities—with the Kurds pursuing their own separatist agenda. Moreover, several of the Sunni factions were strongly Islamist, with some of the organizations receiving extensive financial and logistical backing from Saudi Arabia and other autocratic states. Yet U.S. (and other Western) leaders continued to argue that most of the rebels were “moderates” despite mounting evidence to the contrary.

Assad is a nasty, brutal ruler, but the U.S.-assisted attempt to remove him from power would likely have produced either a Sunni Islamist dictatorship, or as in the cases of Iraq and Libya, extensive violence and instability. Ironically, Russia’s intervention to help keep its beleaguered client in power may have spared the United States from the worst consequences of another foreign-policy folly.

Trump’s troop withdrawal announcement is an overdue attempt to extricate the United States from a beckoning Middle East morass. Washington was both foolish and arrogant to meddle in Syria’s civil strife in the first place. A prompt exit is highly advisable, and Trump deserves credit, not condemnation, for that decision—if he carries it out.

More important, though, U.S. political and opinion leaders need to reject the siren call for any new regime change wars. The interventions in Iraq, Libya and Syria may have been well-intended (although there is certainly room for doubt on that score), but policies must be judged on the basis of outcomes, not intentions. And the results have ranged from extremely disappointing to calamitous.

Ted Galen Carpenter is a senior fellow is security studies at the Cato Institute and a contributing editor at the National Interest. He is the author of twelve books and more than 750 articles on international affairs. His latest book is Gullible Superpower: U.S. Support for Bogus Foreign Democratic Movements (2019).