Lift the Arms Embargo on Cyprus 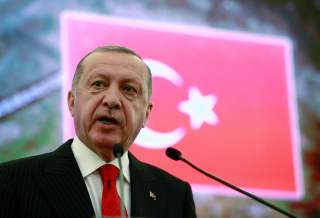 Turkish president Recep Tayyip Erdogan is facing increasing voter resistance to his dictatorial plans. Fears are increasing that he might be planning military action to inflame nationalist support. Yet Ankara continues to purchase American weapons even as Washington has embargoed sales to the Republic of Cyprus (ROC), the most obvious target of Erdogan’s ill attention.

Like many European lands, Cyprus has a long and tortured history. Taken over by the United Kingdom from the Ottoman Empire in 1878, the island uneasily contained an ethnic-Greek majority and ethnic-Turk minority. A Greek-dominated independence movement led to establishment of the Republic of Cyprus in 1960.

The complex ethnic-based constitution, designed to protect the ethnic-Turkish 17 percent of the population, broke down, leading to communal violence. In 1974, the military junta ruling Greece backed a coup by Greek nationalists on the island, intended to lead to enosis, or union with Greece. Five days later Turkey invaded and conquered 37 percent of the island.

Ankara had colorable authority to act—by treaty Turkey was a guarantor power and Turkish-Cypriots feared the consequences of the two dictatorial Greek governments uniting. However, Ankara employed ethnic/religious cleansing while seizing a disproportionate share of the island and made the division permanent. In 1983, Ankara turned its occupation zone into the Turkish Republic of Northern Cyprus (TRNC). Today Europe’s only divided capital city is Nicosia. (The TRNC, recognized by Ankara alone, calls the city Lefkosa.)

There have been years of negotiations over reunification. The two sides often talked past each other. Greek-Cypriots focused on recompense for those driven from their homes. Turkish-Cypriots emphasized the need for security for the minority community. In 2004, both communities put the Annan Plan, negotiated with the assistance of UN Secretary General Kofi Annan, to a vote. Two-thirds of the normally recalcitrant Turks voted yes while three-quarters of the normally enthusiastic Greeks said no. Perhaps the most important reason for rejection by Greek-Cypriots was preservation of a Turkish military presence on the island. While the Turkish military’s presence comforted some ethnic Turks in the north, the same forces unsettled residents of the ROC.

Subsequent desultory negotiations led nowhere, with the last formal round breaking down two years ago. The ROC’s entry into the European Union, and consequent expansion of economic opportunities, reduced pressure in the south for an agreement. Moreover, a number of younger residents of the north took advantage of their ability to travel and settle in Europe through the legally recognized government in Nicosia. Unification looks dead as long as Turkey maintains troops on the island and influences decisionmaking in the north.

Worse, today peace might be at risk. While there is no substantive cause for renewed fighting, politics might tempt Erdogan to foment a conflict.

Ankara backs its client state’s claim to an Exclusive Economic Zone, in which natural gas deposits have been discovered. The Erdogan government has interfered with Nicosia’s attempt to develop these resources and announced plans to drill in Cypriot waters. Turkey also routinely violates Greek airspace above the latter’s islands near the Turkish coast. Under pressure at home after his party lost the Istanbul mayoralty—a rerun is being held after Erdogan personally threatened members of the nominally independent election commission—he might believe that a foreign crisis would result in domestic gain.

Yet the U.S. embargoes arms against the Cypriot government alone.

In 1987, Washington imposed an arms embargo on the island. In theory this measure is nonpartial; supporters argue that it prevents an arms race. However, banning U.S. sales does not prevent other nations, such as Russia, from supplying weapons.

Indeed, in 1997 the ROC announced its intention to purchase Russia S-300 air defense missiles. Turkey threatened a blockade or war and purchased Israeli missiles for use against the Russian weapons. Eventually Cyprus traded the S-300s to Greece for other weapons to defuse the crisis. Ironically, today the Erdogan government is planning on purchasing Russian S-400s.

More important, as is evident from the S-300 incident, the relevant balance is with Turkey, not inter-Cypriot. The north has no military and is unaffected by an American arms ban. Rather, the TRNC relies upon the Turkish military, which is permitted to buy U.S. arms.

Washington briefly embargoed arms sales to Turkey after the invasion of Cyprus, but since then Ankara has been a major buyer. The contretemps over Turkey’s planned purchase of Russia’s S-400 air defense system might prevent sale of the F-35 warplane, but that has nothing to do with Cyprus. Rather than preventing an arms race, the embargo on Cyprus unfairly restricts only one side seeking to defend itself from a well-supplied antagonist.

Of course, it might not be prudent for Nicosia to confront Ankara militarily, as the former decided two decades ago, but that is a decision for the ROC. There is no reason for the United States to prevent the internationally recognized Cypriot government from purchasing U.S. weapons.

Indeed, given the Erdogan government’s steady shift toward authoritarianism and Islamism, as well as closer relations with Russia, Washington should show no deference to its once valued ally. Turkey even has complained about the possible establishment of a NATO or U.S. base on Greece’s Dodecanese Islands in the eastern Aegean. These days Ankara disdains American interests. The Trump administration should return the favor.

Washington could offer to sell Cyprus Patriot missiles after lifting the ban, weapons which Ankara rejected as an alternative to buying the S-400s. The United States and EU also should warn Turkey of the consequences of aggressive action against the island, including expulsion from NATO. Conflict with Greece could even bring other NATO members in against one of its members.

Jonathan Schanzer and Bradley Bowman of the Foundation for the Defense of Democracies go further, arguing that lifting the embargo also would strike at China and Russia, which have cultivated economic ties with the ROC. Moscow has developed military relations as well, selling arms and using maritime facilities for military operations in Syria. China called the island a “strategic partner.” In fact, Schanzer and Bowman suggest that Nicosia be required to “make certain tangible assurances” regarding both nations before removing the embargo.

The prospect of increasing U.S. arms sales should give the proposal a boost with the Trump administration, which Cyprus’s foreign minister predicted will lift the ban. Moreover, House members Ted Deutch and David Cicilline (Democrats) and Gus M. Bilirakis (Republican) introduced to lift the ban.

So, have Sen. Robert Menendez, ranking member of the Senate Foreign Relations Committee, and Sen. Marco Rubio. Said Menendez: “I have always had a view of lifting the arms embargo. I think we are getting ever closer and to the credit of the Cypriot government they have taken a series of actions that I think makes that move possible.”

The current arms embargo on Cyprus is unbalanced and unfair. Favoring Turkey never was likely to help keep the peace. Today, given the Erdogan government’s transformation into a frenemy of America at best, and confrontational policy toward Cyprus and Greece, the embargo rewards an essentially rogue government.

The United States should see Turkey plain and stop tolerating the latter’s unfriendly conduct. Ankara should bear the full cost of its hostile policy towards America as well as both Greece and Cyprus. Eliminating the arms embargo would redress a great imbalance in U.S. policy.