Madeleine Albright Is Back, but She Is Still Living in the Past 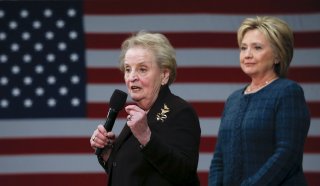 Madeleine Albright is back with a new book to sell. Interviewed in by the New York Times magazine, she reminds us how she continues to live in the past. Unfortunately, that’s what made her advice as UN ambassador and secretary of state so uniformly bad.

When in office she announced that “My mindset is Munich.” Yet Adolf Hitler was sui generis, the unappeasable, fanatical tyrant in charge of the country with Europe’s largest population and economy, and greatest military potential. Applying that model to Yugoslavia, Iraq, Russia, and a host of other modern problems yielded awful results. Nevertheless, when asked by David Marchese about her claim that America was the “indispensable nation,” she returned to Munich to justify her view, arguing “as a Czechoslovak, the United States was not involved in Munich and terrible things happened.”

One of the disasters that she endorsed was the Iraq war. Although not as enthusiastic about launching an illegal, aggressive war as Sen. Hillary Clinton, Albright said at the time: “I personally felt the war was justified on the basis of Saddam’s decade-long refusal to comply with UN Security Council resolutions on WMD.” When pressed on America’s alleged indispensability, she allowed: “Vietnam clearly was a terrible disaster. The war in Iraq was a terrible disaster. I do think that we have misunderstood the Middle East.” Yet such admissions don’t appear to have tempered her enthusiasm for Washington’s meddling around the globe.

She does run away from her flip answer to journalist Lesley Stahl’s question about the death of a half million Iraqi children due to sanctions: “we think the price is worth it.” Albright even claims that the Clinton administration came to recognize the human cost of sanctions and moved to better targeted “smart” penalties. Yet there is nothing smart about America’s current economic war on Venezuela, Iran, and North Korea.

Moreover, she did not retreat from the assumption that U.S. policymakers are entitled to decide on the life and death of foreigners. She might doubt in retrospect that the price was worth it. But she still believes that decision was for her and other Clinton administration officials to make.

This mindset has made the U.S. government anathema to many around the globe. Why do “they” hate us? Because of officials like Albright. These days even the Europeans loath Washington. No doubt, she would be horrified to be lumped with President Donald Trump and some of his aides, such as Secretary of State Mike Pompeo, but they all are swimming in hubris. Albright is simply more polite when dealing with representatives of wealthy industrialized countries. In contrast, Trump and Pompeo are ever ready to insult them as well.

Nor does she appear to retreat from the hubris she constantly expressed in other forms. For instance, while declaring the U.S. to be “the indispensable nation,” she also claimed: “We stand tall and we see further than other countries into the future, and we see the danger here to all of us.” That assertion was bad enough when she made it in 1998. After Afghanistan, Iraq, Libya, Yemen, Syria, and more it is positively ludicrous. Overweening arrogance among foreign policy elites has cost America thousands of lives and trillions of dollars, while killing hundreds of thousands of foreigners and ravaging foreign nations.

However, it is not just those overseas for whom Albright has contempt. In 1992 she famously queried Colin Powell: “What’s the use of having this superb military you’re always talking about if we can’t use it?” Never mind the lives of those who volunteered to defend America. For her, they were just gambit pawns to be sacrificed in whatever global chess game she was playing at the time. Powell, then Chairman of the Joint Chiefs of Staff, observed: “I thought I would have an aneurysm.” Having served in Vietnam, he knew what it was like to lose soldiers in combat. Anyone who has family in the military, as I do, cannot help but react similarly.

A decade later she was asked about her comment. She responded: “what I thought was that we had—we were in a kind of a mode of thinking that we were never going to be able to use our military effectively again.” A strange claim, since shortly before George H. W. Bush had sent American military personnel into a limited war against Iraq, while avoiding an interminable guerrilla war and attempt at nation-building. She well represented the sofa samurai who dominate Washington policy-making.

Even worse, however, in 1997 she said to Gen. Hugh Shelton, also JCS chairman: “I know I shouldn’t even be asking you this, but what we really need in order to go in and take out Saddam is a precipitous event—something that would make us look good in the eyes of the world. Could you have one of our U-2s fly low enough—and slow enough—so as to guarantee that Saddam could shoot it down?” He appeared to react rather like Powell, indicating that it could be done as soon as she was ready to fly.

Albright is intelligent and has a fascinating family background. But she should be kept far away from American foreign policy.