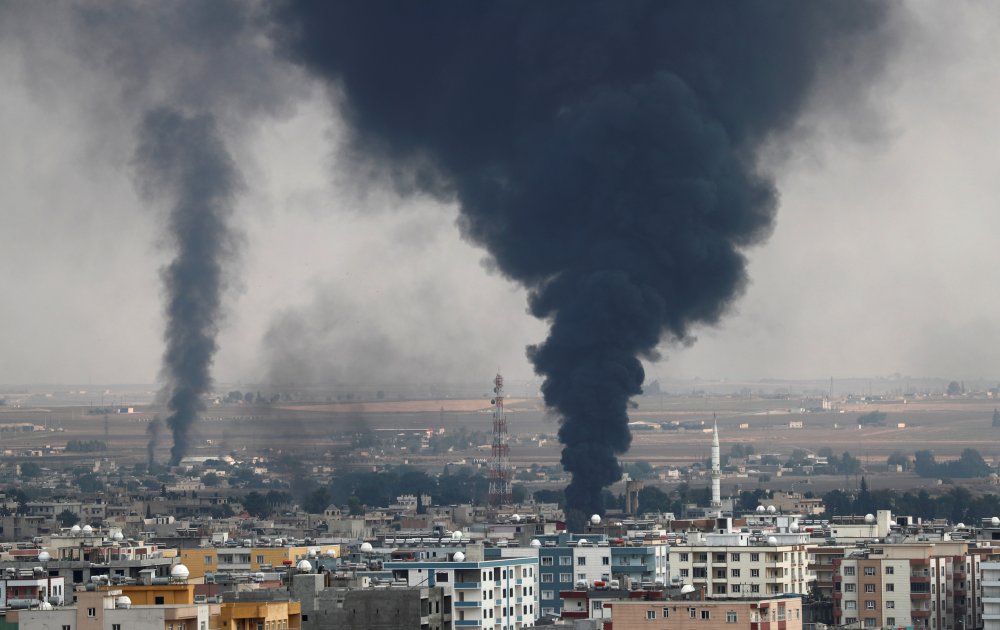 Mainstream media outlets inundated President Donald Trump with shrill denunciations when he announced the withdrawal of U.S. troops from Syria’s northern border with Turkey. The most frequent, emotionally laden criticism was that he had betrayed America’s Kurdish allies who had done much of the fighting against ISIS, giving Turkey a “green light” to launch a brutal military offensive against them. Most opinion pieces—and editorials masquerading as news stories—used such terms as loyal, noble, faithful and democratic to describe the Kurds. Once again, news coverage turned a complex geopolitical issue into a simplistic melodrama featuring admirable protagonists confronting odious villains.

Trump’s handling of the withdrawal issue was indisputably clumsy, and the Turkish government has many unsavory features. Indeed, as I’ve written elsewhere, it should be an embarrassment to Washington to have the duplicitous, autocratic Turkish government as a NATO ally. But Ankara’s concerns about the impact of Kurdish separatist campaigns in Syria and Iraq on Turkey’s own festering Kurdish minority problem is not without merit.

The Kurdistan Workers Party (PKK) in Turkey has waged a secessionist war intermittently since the early 1980s. Turkish leaders worry about ties between the PKK and their ethnic brethren in Syria and Iraq. The nature and extent of the relationship is the subject of considerable uncertainty and controversy. Writing in Time, Jared Malsin, a Middle East correspondent for the Wall Street Journal, notes that both Turkey and the U.S. list the PKK as a terrorist organization, “but the U.S. insists that its militia partners in Syria are a separate group from the PKK.” Yet, Malsin emphasizes, “the two organizations have direct ties, and Kurdish citizens of Turkey are among the YPG’s [People’s Protection Units] fighters.” The Kurdish Democratic Union Party of Syria, which controls the YPG, originated in 2003 as an offshoot of the PKK.

The Kurdish political movements in both Syria and Iraq also fall considerably short of being models of Western-style democracy. Kurdish fighters in Syria have committed a significant number of atrocities against prisoners of war and even noncombatants. Moreover, the Syrian Kurds did not assist the United States against ISIS out of a sense of altruism. Instead, they saw an unprecedented opportunity to achieve a long-standing goal: the establishment of an autonomous (if not outright independent) Kurdish-ruled region similar to what their counterparts in Iraq attained after the 1991 Persian Gulf War. Defeating ISIS was a prerequisite to establishing such an enclave.

The stark oversimplifications that characterize much of the media treatment of Trump’s decision to sever ties with the Syrian Kurds have typified coverage of other foreign policy issues. Indeed, for most portions of the media, the entire Syrian civil war since 2011 has been a stark melodrama between good and evil akin to the animated television series feature, Dudley Do-Right, which last appeared in 2014. In the standard media narrative, Syrian dictator Bashar al-Assad was arch-villain Snidely Whiplash, while Syrian insurgents were his innocent democracy-seeking victims—the equivalent of Sweet Nell, about to be tied to the railroad tracks. The United States, of course, was the noble, idealistic Dudley Do-Right, riding to the rescue.

Not only did such accounts ignore or minimize the crucial religious dimension of the Syria conflict, even though the insurgency was overwhelmingly Sunni while Assad’s supporters were a coalition of religious minorities consisting mainly of Christians, Druze and Assad’s own Alawites—a Shiite offshoot—who feared their likely fate under a Sunni-dominated successor government. Most media outlets also denied or ignored the radical Islamist orientation of several rebel factions, even going so far as to simply regurgitate Obama administration propaganda that they were “moderates.” On some occasions, especially the siege of Aleppo, media accounts were almost the opposite of the actual situation.

A small minority of more skeptical journalists sharply criticized their colleagues for their naïve or biased conduct. According to the Boston Globe’s Stephen Kinzer, “for three years, violent militias have run Aleppo. Their rule began with a wave of repression. They posted notices warning residents: ‘Don’t send your children to school. If you do, we will get the backpack and you will get the coffin.’” A handful of other analyses confirmed the extent of abusive Islamist rule in rebel-held Aleppo, something the mainstream media sanitized.

In early 2016, the Syrian army, backed by Russian air support, launched an offensive to push the militants out of Aleppo. But, Kinzer fumed, “much of the American press is reporting the opposite of what is actually happening. Many news reports suggest that Aleppo has been a ‘liberated zone’ for three years but is now being pulled back into misery.” He noted that Washington-based reporters used terminology that attempted to portray even the staunchly Islamist faction, Jabhat al-Nusra, as being composed “of ‘rebels’ or ‘moderates,’ not that it was the local al-Qaeda franchise.”

Georgetown University senior fellow Paul R. Pillar likewise was critical of much of the Aleppo coverage, finding it excessively emotional and one-sided. British journalist Patrick Cockburn contended that there was far more propaganda than genuine news coming out of Aleppo. He charged that most outlets were relying on locals provided by rebel factions to provide information, and such a process guaranteed blatant bias. “The foreign media has allowed— through naivety or self-interest—people who could only operate with the permission of al-Qaeda-type groups such as Jabhat al-Nusra and Ahrar al-Sham to dominate the news agenda.”

The same pattern of oversimplifying complex disputes and designating one side as virtuous and the other as villainous was a striking characteristic of media accounts of the Balkan Wars (Bosnia and Kosovo) in the 1990s. Proponents of advocacy journalism, such as Samantha Power, who would later serve on the National Security Council and become U.S. ambassador to the United Nations during Barack Obama’s administration, openly asserted—and in her case, continues to assert—that it was the media’s duty to sell the public on the need for Western military intervention to save the victims of odious Serb aggressors. Key nuances, including that some of the most ferocious fightings in Bosnia occurred between Muslims and Croats, not between Muslims and Serbs, were largely ignored. So too, were war crimes that Muslim forces committed in both Bosnia and Kosovo. In the latter theater, such atrocities included murdering civilians and prisoners of war to sell transplantable organs on an international black market.

Media coverage of the Balkan and Syrian conflicts was horribly simplistic and one-sided, but the worst example of media malpractice occurred in the lead-up to the Iraq War. Not only did most major media outlets largely exclude opinion pieces that challenged the Bush administration’s case for war, but prominent journalists lionized Ahmed Chalabi, the corrupt leader of the main exile group, the Iraqi National Congress. Worse, they served as channels for his disinformation.

The most egregious offender was the New York Times and its lead reporter, Judith Miller. Chalabi and his colleagues continuously fed the Times bogus information about two developments that were certain to alarm the American people and generate public pressure for war. One intelligence stream highlighted Saddam Hussein’s alleged ties to Al Qaeda, including reported clandestine meetings between Iraqi officials and leaders of the terrorist organization. Another stream featured an alleged defector who provided “evidence” that Saddam’s government was vigorously expanding an arsenal of “weapons of mass destruction”—specifically, chemical and biological weapons. Most worrisome were allegations that Baghdad was actively pursuing a nuclear-weapons program and already had made substantial advances. Chalabi made certain that his good friend, Judith Miller, broke that story.

The problem, of course, is that both streams of intelligence were totally bogus. Yet Miller would later deny any culpability for building a false case for war. She protested that “relying on the mistakes of others and [making] errors of judgment are not the same as lying.” One critic astutely responded: “It’s almost as though she is saying that if Ahmed Chalabi told her that in Iraq the sun rises in the west, and she duly reported it, that would not be ‘the same as lying.’” However, she should be judged “by her authoring studies for the ‘newspaper of record’ that were questionably sourced and very often misleading.” Despite her post-facto denials, Miller “played a pivotal role in building the public case for an attack on Iraq based upon shoddy reporting . . . including over-reliance on a single-source of easy virtue and questionable credibility—Ahmed Chalabi.”

One might think that after the inept coverage of the Balkan Wars—and the utter fiasco of the Iraq coverage—journalists would have learned not to place unquestioning trust in foreign factions that profess to be champions of democracy and loyal friends of the United States. Foreign conflicts are almost always complex struggles between murky adversaries with an abundance of ulterior motives. They are not Manichean contests between good and evil. Unfortunately, media treatments of the Syrian conflict, especially the pervasive hero-worship of the Kurds, suggest that most journalists have learned little or nothing from their profession’s previous cases of malpractice.