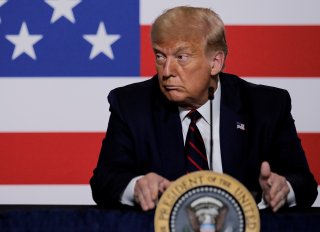 Beltway blobsters were on the edge of their seats Tuesday last week as Donald Trump went off-script from prepared remarks at the Rose Garden. “The EU was formed to take advantage of the U.S.,” he asserted amidst a markedly Trumpian tour d’horizon that included attacks on Joe Biden and blows at China for cheating on trade and the WHO. “I know that. They know I know that, but other presidents had no idea,” he added. Needless to say, “take advantage” is the sentence’s climax, but “formed” is its novel keyword.

A textbook case in Trumpian teleology, purpose and outcome are confounded in this latest boutade. Penalizing America is—to the blob’s great dismay—the unquestionable effect of a number of EU policies, but a cursory look at the bloc’s history shows this has hardly ever been its raison d’être. To his credit, the president’s hardball deal-making antics on trade and defense spending through his first term have itched the transatlantic alliance towards fairer territory in a way that the blob’s sanguine piety never could have. Precisely to preserve this success, the President would be better advised to stay focused on rebalancing EU-U.S. ties instead of cooking up senseless conspiracies that risk making his negotiations with the Europeans harder than they are already poised to be ahead of a potential second term. In a nutshell—more Trump, less conspiracy.

Not only was the EU not “formed to take advantage of the U.S.,” the bloc’s genesis was in fact majorly shaped by American financial and diplomatic patronage. Ironically, the little-known history of America’s invisible hand in promoting European integration has bred another all-too-common conspiracy across the Atlantic, one that runs exactly in reverse to Trump’s—the EU is an American plot to subvert European nations. Both are equally outlandish efforts to buttress a common dislike of the EU in half-baked narratives that involve the United States to a far larger degree that is historically credible. The two are debunkable at once—the United States was neither the self-interested author of the European project nor its unwitting victim by design. That the United States has been gradually pushed towards the latter position by myriad EU policies reveals a useful lot about what’s actually wrong with the transatlantic relationship—and would make for much sounder Trumpian rhetoric.

The story begins in Europe’s most U.S.-skeptic nation, France, going back to Charles de Gaulle’s fictitious dealings with the Allies throughout World War II, sourly recounted in his seminal three-tome memoirs. After dragging their feet to recognize his Forces Françaises Libres as a rightful member of the Allied Forces, the United States and Britain remained strategically loath to placing too much stock in De Gaulle’s military potential, his large backing across France’s colonial empire deemed a poor match to his lackluster following in the hexagon, where factionalized groups of résistants faced immense risks in carrying any meaningful acts of sabotage or propaganda. De Gaulle’s wartime misgivings with the Allies soon morphed into a larger aversion to American power that imbued Gaullism well beyond his retirement in 1969.

In the immediate post-war, de Gaulle feared that America’s help securing European peace and prosperity would come at his country’s expense. Relative to his maximalist vision of a France fully sovereign to wield power across the continent and in the colonies, his fears weren’t entirely off-base. The suspicion reached fever pitches with the U.S.-EURATOM nuclear power agreement in 1956—which he dreaded would give the US a free ride on France’s nuclear technology while undermining its energy independence—and America’s isolation of Europe’s British and French colonial powers by siding with Egypt’s Nasser over the Suez crisis. U.S.-skepticism among the Gaullist right has since then been kept alive by later hiccups, most recently France’s blocking in 2003 of a UN Security Council Resolution against use of force in Iraq.

The EU, for its part, is another hot target of Gaullist skepticism, and the kin aversions towards American hegemony and European supranationalism have over time jibed to produce the aforementioned conspiracy that the EU is an American plot to undermine European nations. In de Gaulle’s thinking, France’s sovereignty and its place atop European power balances stood to lose from both U.S. interference and the embryonic EU that he worked to restrain from becoming a free-wheeling supranational entity. American diplomats, he feared, would conspire with EU-federalists to drum up a faux dream of European unity with the ultimate goal of undermining French grandeur. This conspiracy is nowhere better captured than in a recent book by Philippe de Villiers, a compilation of findings the Gaullist poster child made over successive research trips to previously classified files in Berlin, Lausanne and Stanford. The book is titled as a response to an innuendo confided to him decades ago by Maurice Couve de Murville, then De Gaulle’s Foreign Minister—Philippe, il vous suffira de tirer sur le fil du mensonge et tout viendra (“Philippe, all you have to do is pull the thread of lies and all the pieces of the puzzle will fall back into place”).

America’s role as an early promoter of European integration is no doubt a topic of worthy historical interest, and J’ai tiré sur le fil du mensonge et tout est venu (“I pulled the thread of lies and everything made sense”) reads like a riveting tell-all—it sold copies at a rate of 1,000 a day in its first ten days out last year. Among the book’s nuggets, one finds out that the CIA had easy access to the so-called “Founding Fathers” who steered the EU’s original six member states towards forming the European Coal and Steel Community (ECSC), the bloc’s earliest antecedent. This was particularly true of Jean Monnet, whose memoirs—a seminal read among EU-philes—the Ford Foundation funded through a network of Paris-based institutes. Robert Schuman, the other Frenchman in the mix who uttered the famous namesake declaration on Europe day 1950, is also on the book’s spotlight for having fought on the German side of World War I, and for having kept on serving in Marshal Pétain’s collaborationist government even after it surrendered to the Nazis. De Villiers’ book reveals—with corresponding bank statements à l’appui—that both Schuman and Monnet received during all of fifteen years a stream of donations through Chase Manhattan Bank for what he calls “U.S. influence operations.” Foreign interference much?

Another character in the book is Walter Hallstein, to whom de Villiers ascribes the covert motive of pursuing as the European Commission’s first president a recycled version of Das Neue Europa (A New Europe)—the grand vision, cooked up by Nazi intellectuals to whom Hallstein may have been close before his capture by the Americans, of a federation of European republics under the aegis of the Third Reich. Perhaps de Villiers truly believes that American diplomats and unreformed Nazis secretly conspired at the helm of the European project. More likely, the suspicious liaisons he doubles down on would, if properly contextualized, eat away at his conspiracist best-seller’s effet de choc.

Most of what de Villiers hypes as seismic bombshells has in fact long been conventional wisdom among academic historians of European integration. Monnet’s work with the CIA predated the war. Schuman resided in Alsace in 1914—Prussian territory since 1870—so he could have hardly evaded enlistment with the Germans then. He did vote to grant Pétain the pleins pouvoirs when the Nazis occupied in 1940—De Gaulle was in fact among the few exceptions—but quit the government soon after that year’s Franco-German armistice. According to a cast of field experts who authored a damning review in Le Monde, the whole book is riddled with this nature of half-truths and inconsistencies.

Beneath the veneer of conspiracy, what surfaces from de Villiers’ findings is America’s early interest in a degree of European integration that would help it secure its key post-war foreign-policy ambitions for Europe—peace, Soviet containment and economic recovery. Nor is it any secret that the State Department, the intelligence community and several large foundations—Ford primarily—put their money where their mouths were on this score, primarily through the privately-funded American Committee on United Europe (ACUE). In this light, the more than $15 billion expended through the Marshall Plan were no more an instance of American interference over and above European sovereignty, unless de Villiers is ready to call the Marshall Plan an act of subordination to the Americans too.

When seen in the light of this wider alignment of interests between American diplomats and early Euro-federalists, few if any of de Villiers’ revelations meet a minimum threshold of novelty. He characterizes early plans for a European single market as a secret neo-colonial plot to lock in Europe’s consumer market for America’s ascendant industries, but the conditioning of Marshall Plan aid on the economic opening of recipient countries was rather public all along. The strategic context of Cold War bipolarity brought American and pan-European foreign policy similarly into line in no particularly secret way. To be fair to de Villiers, what’s indeed lesser known in this saga is America’s concealed desire—revealed in CIA and State Department documents his book contains—for an “executive Commission” to drive pan-European market-harmonization policies without the democratic accountability of a federally-elected body, thus easier for U.S. corporate interests to lobby. Today’s European Commission fits the bill rather nicely.